Comments (0)
Add to wishlistDelete from wishlist
Cite this document
Summary
The case emerges from a situation when a 78- year old male starts behaving abnormally in a local restaurant and is reported as being in a highly agitated condition. He is seen pacing up and down, bearing a restless and agitated demeanor, and seems to be unable to sit still…
Download full paperFile format: .doc, available for editing
HIDE THIS PAPERGRAB THE BEST PAPER94.1% of users find it useful 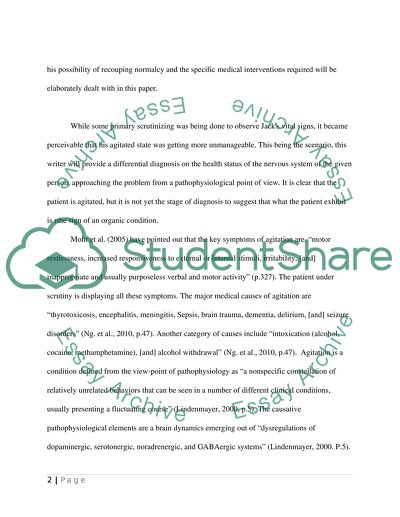 Extract of sample "Pathophysiology of the Nervous System"

Download file to see previous pages The patient is named Jack. He gives an impression of a disorientated person and from his behavior, it is clear that he does not want anybody to touch him. Still, Jack has certain degree of self-awareness, which is visible in the fact that he somewhat recognizes that the medical practitioner was there to help him. But he is found not to be able to answer the questions put to him coherently. He is speaking in a stream of words and is referring to the world as screwed up. He suddenly stops talking and goes quite while standing unsteadily on his feet. He also states that he desperately wants to call his sister. As the situation suggests, he may be suffering from Sepsis, or Thyrotixicosis. The patient is displaying symptoms of a neurological disorder. This paper will be carrying out a diagnosis review of the patient focusing on the pathophysiology of the condition involved. It will also provide a detailed justification for the diagnosis. Topics under consideration are the symptoms, their causes, the potential consequences of the condition, and also the short-term and long-term medical intervention strategies. The age of Jack, the medication that he is under, his health history, the implications of this newly displayed condition, his possibility of recouping normalcy and the specific medical interventions required will be elaborately dealt with in this paper.
While some primary scrutinizing was being done to observe Jack's vital signs, it became perceivable that his agitated state was getting more unmanageable. This being the scenario, this writer will provide a differential diagnosis on the health status of the nervous system of the given person, approaching the problem from a pathophysiological point of view. It is clear that the patient is agitated, but it is not yet the stage of diagnosis to suggest that what the patient exhibit is rthe sign of an organic condition. Mohr et al. (2005) have pointed out that the key symptoms of agitation are, “motor restlessness, increased responsiveness to external or internal stimuli, irritability, [and] inappropriate and usually purposeless verbal and motor activity” (p.327). The patient under scrutiny is displaying all these symptoms. The major medical causes of agitation are “thyrotoxicosis, encephalitis, meningitis, Sepsis, brain trauma, dementia, delirium, [and] seizure disorders” (Ng. et al., 2010, p.47). Another category of causes include “intoxication (alcohol, cocaine, methamphetamine), [and] alcohol withdrawal” (Ng. et al., 2010, p.47). Agitation is a condition defined from the view-point of pathophysiology as “a nonspecific constellation of relatively unrelated behaviors that can be seen in a number of different clinical conditions, usually presenting a fluctuating course” (Lindenmayer, 2000, p.5). The causative pathophysiological elements are a brain dynamics emerging out of “dysregulations of dopaminergic, serotonergic, noradrenergic, and GABAergic systems” (Lindenmayer, 2000. P.5). In other words, agitation could be pathophysiologically an expression of “specific neurotransmitter dysregulations” (Allen, 2002, p.119). Differential diagnosis In order to carry out a differential diagnosis, the practitioner needs to collect information on the history of the patient, to examine and talk to the patient to take note of the “vital signs” (Binder and McNiel, 1999, p.1553), and undertake a “physical examination and laboratory work” (Binder and McNiel, 1999, p.1553). Carrying out an accurate diagnosis of agitation is a difficult venture (Cardinal and Bullmore, 2011, p.151). This is especially the case when the patient is unable to “ ...Download file to see next pagesRead More
Share:
Tags
Cite this document
(“Pathophysiology of the Nervous System Essay Example | Topics and Well Written Essays - 3000 words”, n.d.)
Pathophysiology of the Nervous System Essay Example | Topics and Well Written Essays - 3000 words. Retrieved from https://studentshare.org/health-sciences-medicine/1401220-pathophysiology-of-the-nervous-system

CHECK THESE SAMPLES OF Pathophysiology of the Nervous System

A System of Intermediation

It is unable to report everything. Media owners have their own agendas to pursue apart from the fact that even the Editors have their own ideological and value commitments. Hence sometimes this filter gets distorted. It matters a lot in the context of international development.

The media systems in Eastern and Central Europe have experienced many periods of regression since 1947, from partial or complete censorship to the destruction of journalism and the imposition of control over all the mass communication systems (Hatto, 2007). The means of information and communication production the television and radio studios, the printing and publishing resources were almost centralized in most of the communist nations under the...
8 Pages(2000 words)Coursework

In order to compare the welfare system of the three proposed countries, it is important to first develop a comparative method that would guide in comparing the three states. For the purpose of this paper, a binary comparison would be conducted. The implicit comparison would deal with Britain while the explicit comparison would explore the USA and Canada. Thereby a small N’ study would be used, that is, of three countries.
The three countries selected to share a similarity in the form that these countries are a welfare state. This is when welfare is mainly funded by the state. While the USA and Canada focus on the liberal welfare state, the welfare state of the UK is not quite defined.
The comparison of the welfare...
8 Pages(2000 words)Term Paper
sponsored ads
Save Your Time for More Important Things
Let us write or edit the essay on your topic "Pathophysiology of the Nervous System" with a personal 20% discount.
GRAB THE BEST PAPER

Let us find you another Essay on topic Pathophysiology of the Nervous System for FREE!