Comments (0)
Add to wishlist Delete from wishlist
Cite this document
Summary
Human Geography Analysis According to the world's demographer’s estimate, the global population to hit 10 billion people by 2100. Even though human race harvests sufficient food for all, since the approach to distribute it; there are still a billion hungry human beings around the globe…
Download full paper File format: .doc, available for editing
HIDE THIS PAPERGRAB THE BEST PAPER97.4% of users find it useful 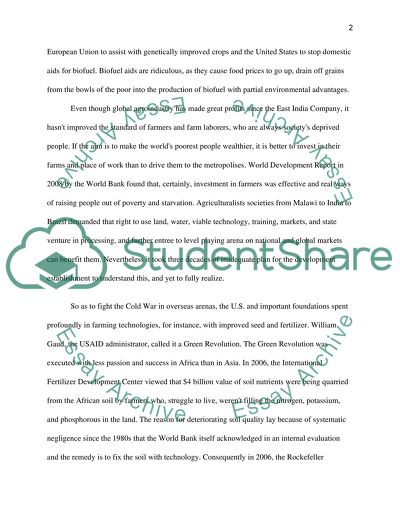 Download file to see previous pages Malawi is a little smaller than Pennsylvania with a population of 15 million people and 90 percent of them living with an average income less than two dollars a day. Experts are in the view that by the end of this century, the population is likely to be almost 132 million. At present, about 40 percent of people in Malawi live below the nation's poverty line. The cause may be for lingering poverty is that in excess of 70 percent of Malawians live in countryside areas where they depend on agriculture for living. Almost all farmers cultivate maize; however, the income from it is insufficient that few people have enough money to live on. Three different views for the future of worldwide agriculture are ranged contrary to one other. The first and most admired progressive idea for Malawi, perceives these agriculturalists as fighters of a condemned way of life to be supported in future. Paul Collier, Oxford economist, is the man behind this ‘noble’ vision who offered in a contemptuous November 2008 Foreign Affairs article in which he hit the ‘romantics’ who coveted for farmer cultivation. Seeing wages in cities are higher than in the rural area, and most advanced nation is capable to nourish itself without peasant farmers, Collier demanded for the features of big agriculture. He as well asked European Union to assist with genetically improved crops and the United States to stop domestic aids for biofuel. Biofuel aids are ridiculous, as they cause food prices to go up, drain off grains from the bowls of the poor into the production of biofuel with partial environmental advantages. Even though global agroindustry has made great profits since the East India Company, it hasn't improved the standard of farmers and farm laborers, who are always society's deprived people. If the aim is to make the world's poorest people wealthier, it is better to invest in their farms and place of work than to drive them to the metropolises. World Development Report in 2008 by the World Bank found that, certainly, investment in farmers was effective and real ways of raising people out of poverty and starvation. Agriculturalists societies from Malawi to India to Brazil demanded that right to use land, water, viable technology, training, markets, and state venture in processing, and further entree to level playing arena on national and global markets can benefit them. Nevertheless it took three decades of inadequate plan for the development establishment to understand this, and yet to fully realize. So as to fight the Cold War in overseas arenas, the U.S. and important foundations spent profoundly in farming technologies, for instance, with improved seed and fertilizer. William Gaud, the USAID administrator, called it a Green Revolution. The Green Revolution was executed with less passion and success in Africa than in Asia. In 2006, the International Fertilizer Development Center viewed that $4 billion value of soil nutrients were being quarried from the African soil by farmers who, struggle to live, weren't filling the nitrogen, potassium, and phosphorous in the land. The reason for deteriorating soil quality lay because of systematic negligence since the 1980s that the World Bank itself acknowledged in an internal evaluation and the remedy is to fix the soil with technology. Consequently in 2006, the Rockefeller Foundation joined the Gates Foundation to launch ‘ ...Download file to see next pages Read More
Share:
Tags
Cite this document
(“Human Geography Analysis Essay Example | Topics and Well Written Essays - 2750 words”, n.d.)
Retrieved from https://studentshare.org/geography/1398168-human-geography-analysis

The employee was sent to HR for a final briefing where he mentioned that he had been requesting a change in the shift for the last few weeks he has to attend to his ailing father. His superior continuously ignored the request. The employee was skill and aptitude tested and reassigned to a different project.
This is a small incident where an HR professional can play a vital role. An organization is also constantly looking for such solutions from its Human Resource Department. It is this expertise and skill, which a budding professional from any institute should be equipped.
Such valuable certification programs initiated by the Human Resource Department surely help build a successful organization. The Human resource depart...
6 Pages (1500 words) Term Paper

Credibility material: As I watched my grandmother deteriorate into her senility, slowly forgetting everyone she knew as well as the logical explanation for the tremendous pain she suffered as a result of her cancer, it became increasingly important to me to find some way of reducing her pain and suffering. The only available answer, euthanasia, was not available legally, so my grandmother was forced to die a terrible death in confused terror among strangers. She had been a strong, vibrant, intelligent woman who took tremendous pride in her family, yet we were left with this image of a terrified child lost in pain and confusion.
Thesis sentence: In exposing the various facts regarding human euthanasia and the debate surr...
7 Pages (1750 words) Speech or Presentation

In th...
8 Pages (2000 words) Case Study
sponsored ads
Save Your Time for More Important Things
Let us write or edit the essay on your topic "Human Geography Analysis" with a personal 20% discount.
GRAB THE BEST PAPER

Let us find you another Essay on topic Human Geography Analysis for FREE!