Comments (0)
Add to wishlistDelete from wishlist
Cite this document
Summary
In astronomy, determining the relative position of the moon, the sun and the Earth requires the study of phases of the moon at different days of observation. In which case, complete cycle through the phases called lunar month gives the synodic month, always around 29 days. The…
Download full paperFile format: .doc, available for editing
HIDE THIS PAPERGRAB THE BEST PAPER96.5% of users find it useful 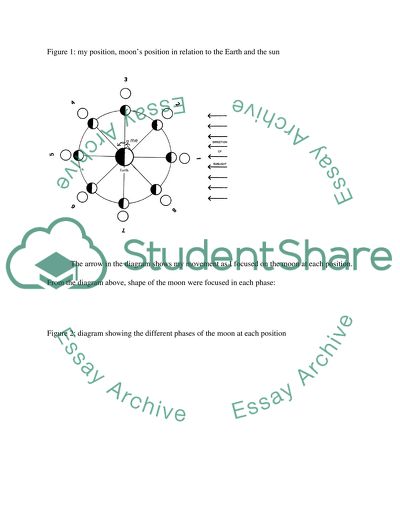 Experiment #3 — observing the Moon’s Phases Objective To determine the relationship of the Earth, Moon and Sun as the Moon orbits the Earth.
Introduction
In astronomy, determining the relative position of the moon, the sun and the Earth requires the study of phases of the moon at different days of observation. In which case, complete cycle through the phases called lunar month gives the synodic month, always around 29 days. The lab report studied these phenomena to realize moon’s position in relation to the other two.
Procedure
The moon was observed and a dark part was shaded to show how the moon would look like at each point from the Earth. Each phases of the moon was labeled and presented in diagram forms as shown in the result section.
Results
Figure 1: my position, moon’s position in relation to the Earth and the sun
The arrow in the diagram shows my movement as I focused on the moon at each position. From the diagram above, shape of the moon were focused in each phase:
Figure 2: diagram showing the different phases of the moon at each position
Table 1
Day
No.
Day
Date
Time
Comments/ Weather Conditions
1
1
23rd sept 2014
2030hrs
Full moon
2
25th sept
2130hrs
Gibbous
3
27th sept
2030hrs
Half moon
4
29th sept
2045hrs
Crescent
5
1st oct
2056hrs
New moon
6
3rd oct
2045hrs
Crescent
7
4th oct
2050hrs
half moon
8
6th oct
2040hrs
gibbous
Conclusion
The experiment was successful in meeting the previously stated objective. Different phases of the moon were realized from each day of observation thereby insinuating the position of the moon in relation to the sun and the Earth. In which case, during the full moon the Earth was observed to be in the middle while during the new moon, the moon was observed to be between the two. Read More
Share:
Tags
Cite this document
(“Lab Essay Example | Topics and Well Written Essays - 250 words - 3”, n.d.)
Lab Essay Example | Topics and Well Written Essays - 250 words - 3. Retrieved from https://studentshare.org/formal-science-physical-science/1658034-lab

CHECK THESE SAMPLES OF Lab

...? Lab 4: Enzyme Experiment Effect of enzyme concentration Data Table Effect of enzyme concentration on the production of gas Response to Question 1 Enzyme-Catalase produced by the yeast Substrate-Hydrogen peroxide Response to Question 2 The rate of reaction in tube 1 was rapid followed by tube 2 and in tube 3 it was the slowest. This difference was because of the differences in the concentration of yeast cells that produces catalase enzyme directly proportion to the amount in each tube. The higher the concentration of catalase enzyme the higher the rate of reaction and vice versa. In other words the more yeast put in the Hydrogen Peroxide the more violent the reaction; therefore, giving off more oxygen. This is because of the reaction...
3 Pages(750 words)Lab Report

...? Psychology A number of researchers have tried to expound the idea behind the working of the memory. Uncovering the principles involved in the spatial information and the working memory has been the primary goal of most of the psychologist and neurologist (Hommel, Musseler, Aschersleben & Prinz, 2001). Spatial information entails those form of information that human being encounters in his day-to-day activities. The research done by Humphreys & Riddoch (1992) reveals that the way the spatial information are perceived and perceptually organized may shape the emerging cognitive representation some time before processes of memory storage or retrieval come into play. Such information is acquired through senses. A number of theories... Psychology ...
3 Pages(750 words)Lab Report

...? pH Values of Common Household Items Compare and contrast acids and bases in terms of their H+ and OH- ion concentrations. All substances can be classified into acids, bases and neutral depending on their ionization trends when dissolved in water. Acids produce a greater number of H+ ions which can be explained by the fact that acids give up a H+ ion on reaction with water forming an H3O+ ion. These ions cause the litmus to turn red. Greater the concentration of H+ ions, stronger is the acid signified by the pH scale: pH of 1 being the most acidic and 7 being neutral. For bases, number of generated OH- is greater than H+. These, on reaction with water, gain a hydrogen ion leaving behind an OH- ion. Bases cause the litmus to turn... pH Values ...
5 Pages(1250 words)Essay

...in this experiment, including medical expenses due to any sickness or injury incurred as a result. I represent that I am at least 18 years of age, have read and understand the foregoing statement, and am competent to execute this agreement. Name: Date: Address: Phone: Witness for the undersigned: Signature: Lab #5 Lesson 11 Reflection Paper Details of the Participants Participant Age Gender Recognition Test 1 A 33 M 17 2 B 30 F 13 3 C 54 F 10 The three participants that were chosen for this were selected all at once. Two are family members and one is a significant other. Before asking them to participate in the experiment, I decided to warm them up with friendly conversation. Then, I asked them to...
6 Pages(1500 words)Assignment

... Procedure This experiment requires three cuvettes, a spectrophotometer, a graduated cylinder, dye of three differentcolours. The first step is to fill the three cuvettes with red dye, green dye and blue dye with each holding a dye of different colour. The initial concentrations of these dye is 100% at the beginning of the experiment. The cuvettes are then placed into a spectrophotometer. They are oriented in such a way that their smooth sides lining face the light source to enable easy penetration of light through them. Multiple trials were then performed because the spectrophotometer can only measure one sample at a time. In order to ensure accuracy and precision, it was necessary to re-calibrate the spectrophotometer three... Procedure...
1 Pages(250 words)Essay

... Due Visiting the Michigan Museum: LAB Room: The First People (Michigan’s First People When did the first people arrive in Michigan? Where did they come from? Discuss the resources which were most significant to them. The majority of the origins of people in Michigan are Native American; which arrived between 12,000 and 14,000 years ago. These Paleo-Indian peoples traveled from Alaska and Asia across the Bering Straits. The most important resources to these peoples were the herds of caribou, mastodons, and mammoths; they relied upon these animals for food and furs for clothing. Room: Lumbering (The History of Lumbering) 2. Back in the 19th century, Michigan forests became the resource on which the lumbering industry was dependent...
2 Pages(500 words)Essay

...WiFi Hot Spot of WiFi Hot Spot Before starting this there are few things should be checked that are. Either of the type (Desktop / Laptop) of the system it must have wireless LAN card installed. For wireless hotspot we need a wireless connection to be free from use and wired LAN connection to be connected. We will use that wired LAN connection to share the connection wirelessly with others. Keep this noted that some work network do not allow connection sharing because of group policies defined by the network engineers. Step 1: We shall start working by going into the Network and Sharing Center via Control Panel; it can also be quickly accessed by right-clicking on the network icon in the system tray. Once we are there, we... Hot Spot of WiFi ...
2 Pages(500 words)Lab Report

... Lab It is crucial to familiarize with various concepts before conducting lab experiments. One of the importantconcepts for this experiment is solubility, which can be defined as the ability of a substance (solute) to dissolve in another (solvent) (Bauer et al. 216). The estimation maximum quantity of a substance that dissolves in a solvent at equilibrium yields solubility (Brown et al. 120). Qualitative analysis is done to identify elements in the sample used for the experiment. For this experiment, qualitative analysis was employed to establish whether or not a precipitate would form upon adding some acids and bases. A flow chart was used to distinguish between cations in the resultant solution. A flow chart refers to a diagrammatic...
1 Pages(250 words)Essay

...values showing the absorbance of a given wavelength, it can be stated that the concentration is directly proportional to the absorbance, which initially was proved by Beer-Lambert Law(Bauer et al.110). The objective of this lab experiment was establishing the percentage Mass of Copper (II) ion (Cu2+) in a sample of ore by using Calorimetry technique. The percentage of Mass can be defined as the mass of a definite element over the total mass of all elements multiplied by 100%(Brown et al.85).Through establishment of a standard for the copper nitrate compound and utilizing the knowledge of Beer-Lambert Law, the % mass of the copper in the ore was attained. 2. Procedure: Materials: 8.5 mL HNO3 4.5 g Cu(NO3)2 * 2.5...
2 Pages(500 words)Essay
sponsored ads
Save Your Time for More Important Things
Let us write or edit the essay on your topic "Lab" with a personal 20% discount.
GRAB THE BEST PAPER

Let us find you another Essay on topic Lab for FREE!