Comments (0)
Add to wishlist Delete from wishlist
Cite this document
Summary
M. Al-Salem, P. Lettieri, and J. Baeyens that was first published in the journal Waste Management back in July 03, 2009. Their study focused on…
Download full paper File format: .doc, available for editing
HIDE THIS PAPERGRAB THE BEST PAPER92.8% of users find it useful 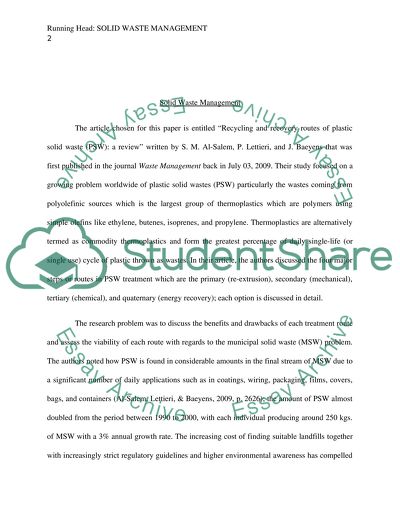 SOLID WASTE MANAGEMENT (Article Critique for Environmental Studies) ID number: of University (affiliation)
Location of University:
Date of Submission: February 14, 2014
Estimated Word Count = 622 (text only)
Solid Waste Management
The article chosen for this paper is entitled “Recycling and recovery routes of plastic solid waste (PSW): a review” written by S. M. Al-Salem, P. Lettieri, and J. Baeyens that was first published in the journal Waste Management back in July 03, 2009. Their study focused on a growing problem worldwide of plastic solid wastes (PSW) particularly the wastes coming from polyolefinic sources which is the largest group of thermoplastics which are polymers using simple olefins like ethylene, butenes, isoprenes, and propylene. Thermoplastics are alternatively termed as commodity thermoplastics and form the greatest percentage of daily single-life (or single use) cycle of plastic thrown as wastes. In their article, the authors discussed the four major steps or routes in PSW treatment which are the primary (re-extrusion), secondary (mechanical), tertiary (chemical), and quaternary (energy recovery); each option is discussed in detail.
The research problem was to discuss the benefits and drawbacks of each treatment route and assess the viability of each route with regards to the municipal solid waste (MSW) problem. The authors noted how PSW is found in considerable amounts in the final stream of MSW due to a significant number of daily applications such as in coatings, wiring, packaging, films, covers, bags, and containers (Al-Salem, Lettieri, & Baeyens, 2009, p. 2626); the amount of PSW almost doubled from the period between 1990 to 2000, with each individual producing around 250 kgs. of MSW with a 3% annual growth rate. The increasing cost of finding suitable landfills together with increasingly strict regulatory guidelines and higher environmental awareness has compelled many researchers to focus on the issue of recycling as a viable alternative due to increased production, consumption, and waste generation rates of PSW in the last few decades.
The researchers gathered data on both PSW and MSW to highlight the problem of these plastic wastes which are not biodegradable and so viable ways must be found to deal with it. The authors used a good number of credible primary and secondary data sources to support their own arguments concerning the routes now available for PSW treatment. In this regard, a continued development in the recycling and recovery technologies is necessary which requires the cooperation of the whole industry, the government, and the consumers because the solution requires investments in infrastructure and the establishment of viable markets for PSW. In this regard, the authors noted how tertiary and quaternary treatment schemes have not been sufficiently investigated when these two options appear to be robust and offer great potential. An approach to energy recovery by combustion is quite attractive (La Mantia, 2002, p. 349).
There are no apparent flaws in the procedural design of their research because the stated purpose is merely to gather existing data on PSW and the technologies presently available when dealing with this problem. The use of data graphs and diagrams greatly helped in the presentation because a reader gets to grasp much information by just looking at these graphs and diagrams. A good analysis of the data will give the reader a sense of urgency of the problem of PSW as the world runs out of landfills and production of plastic continues on an upward trend still. A good use of diagrams is the illustration showing an integrated waste management (IWM) approach in life cycle assessment (LCA) studies to emphasize the value of sustainable consumption patterns and the potentials of using prevention-by-design in helping reduce PSW at the source. The study authors reiterated how tertiary (chemical) recycling is a viable option because it provides fuel by converting waste plastic materials into smaller molecules suitable for use as new feedstock. The quaternary option (energy recovery) is also good as it reduces waste volume by 95% to 99%.

CHECK THESE SAMPLES OF Article Critique

...? Article review of the of the Introduction Physical health is one of the most important aspects of human life. Healthy body not only ensures physical health but also ensures mental and emotional health. Hence, maintaining physical health is an important goal of human beings. However, to maintain good health, what is important is to eat food that is full of nutritious value. This is because all the components of human body, its activities and its defense system against the diseases, is built with the help of nutrients that it gets from the food that is eaten (Whitney & Rolfes, 2011, p.2). The food choices that people make decide how successfully the body handles all its functions and activities (Whitney & Rolfes, 2011, p.2). Hence...
3 Pages (750 words) Article

...? Article Critique Article Critique Isolation for prevention of Nosocomial transmission of MRSA articles a. Research problem The problem in the four studies is whether the implementation of modified isolation precautions would decrease the rate of acquisition of methicillin-resistant Staphylococcus aureus (MRSA). The research problem in each study is quite significant as it helps in preventing the infection of strains of Staphylococcus aureus in hospitals which is quite resistant to methicillin. The research problem also helps to enhance infection control to prevent the transmission of nosocomial organism given that there are limited numbers of antimicrobials. These articles have provided sufficient background information for the study...
5 Pages (1250 words) Article

...?Running head: ARTICLE CRITIQUE Effect of Same-Sex Marriage Laws on Health Care Use and Expenditures in Sexual Minority Men: A Quasi-Natural Experiment Name Institution Professor Subject Research Problem The study aimed to investigate the impact of same-sex marriage policies on the physical and mental health conditions of gays, bisexuals, and lesbians in the U.S. It mentioned substantial number of related studies, which concern constitutional amendments about same-sex marriage and pro-gay marriage policies, and mental health problems among gays, bisexuals, and lesbians. The authors satisfactorily provided a clear background on how policy-level interventions could cause psychological stress among gays, bisexuals, and lesbians, particularly...
4 Pages (1000 words) Article

...? Coping skills in diabetes affiliation Coping skills in diabetes Coping skills for parents of children with type diabetes The above research problem has been cited as the most done research in terms of medication provision among diabetic patients. Parents with diabetic children are very instrumental in ensuring their children have proper medication. The influence of parents to these children is a significant part in their provision of medication. According to the NIH Public Access (2011) parents with children with T1D have been assigned the role of home nurses. This scenario is more rampant for parents with children below the age 8. At this age a child does not have the psychological strength to endure the psychological... Coping skills in...
4 Pages (1000 words) Article

...o the inadequacy of pain management interventions that Hispanic cancer patients receive. By examining their research in a qualitative way, we can get insight on the value of understanding the sociocultural dimension of a cancer patient’s pain management, and thus help equalize the disparities in treatment given to Hispanics and other migrants. This will allow us nurses to give quality patient care to all mankind, as is our sworn responsibility. I. Hispanic Cancer Patient’s Pain as Described in the Article – Discussion and Critique As the authors’ examined the part that socio-cultural background plays in the experience of pain in Hispanic cancer patients, I was given a clear representation of how the healthcare paradigm works in for the...
3 Pages (750 words) Article

...Critical Evaluation of “A Fly in the Buttermilk s of Life by Successful Black Undergraduate Introduction In their article, ““A Fly in the Buttermilk”: Descriptions of University Life by Successful Black Undergraduate Students at a Predominately White Southeastern University” Davis et al explores deep into the self-realization -from the student’s perspective- of a non-white minority student about his or her position among the white majority. The title of their study explicitly asserts the concerns of the Successful Black Undergraduate Students with their University Life among white majority. In addition, they dealt with the theme explicitly and effectively in the beginning of the study, as it is evident in the following line... Evaluation of...
4 Pages (1000 words) Article

... Critique Paper – Tussle over Privacy Technology allows people to connect with each other at whatever time. The problem that arises with the use of technology is the issue of privacy. Personal information that is found in most of the sites present can be used for many purposes. In an article by Mangu-Ward Katherine, a member of congress had actually laid his concerns about the use of such information. This is by one of the leading corporations in the world, Disney. He was afraid that personal information was being misused by Disney to get access to young children and manipulate them, which ultimately puts them at risk. The article provides the reader with a response from the CEO of Disney to the member of congress, which was meant...
2 Pages (500 words) Article

...of the index. The patients were given two appointments; six and eight-week re-evaluation sessions. The findings proved that the periscope detected many sites that could not be revealed by the explorer. The results of endoscopic revealed a decrease in surface area of the calculus compared to tactile explorer alone. Moreover, the endoscope made it easier to get rid of calculus in a deep pocket zones. According to the article, the authors came up with a theory that viewing problematic regions of sub-gingival calculus is one element of elimination (Osborn et al., 2014). Critique The article reveals that the use of endoscopic had some shortcomings. Despite the use of periscope, there were remaining areas of residual calculus during the second...
2 Pages (500 words) Article
sponsored ads
Save Your Time for More Important Things
Let us write or edit the article on your topic "Article Critique" with a personal 20% discount.
GRAB THE BEST PAPER

Let us find you another Article on topic Article Critique for FREE!