Comments (0)
Add to wishlistDelete from wishlist
Cite this document
Summary
Student ID Lecturer Submission Date University Creating Job Descriptions and Interview Questions 1. Job Description of HR Director The HR Director is required to undertake all efforts and measures which would ensure that the organizational mission and vision are set in line to achieve the end objectives and goals…
Download full paperFile format: .doc, available for editing
HIDE THIS PAPERGRAB THE BEST PAPER97.2% of users find it useful 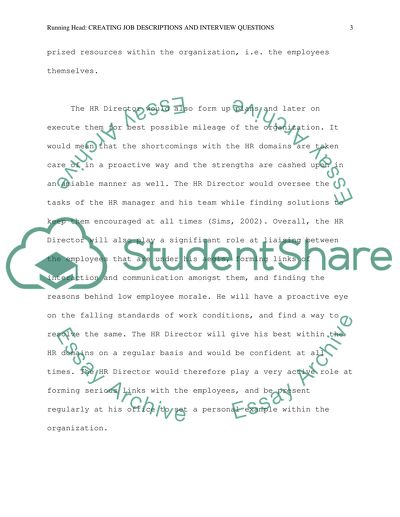 Download file to see previous pages The HR Director would be the one who will oversee all HR related tasks within the organization as his decisions would be in line with how the organization views the entire dictum of recruiting, selecting, and eventually firing the employees. The HR Director would report to the top management about the steps that have been undertaken by the HR department and apprise them of the gradual and incremental shifts that have been coming about within the organization from time to time. He would also be reporting to the CEO of the company as regards to the fiscal measures and thus tell him how the company would meet its goals and objectives that are being seen through the eyes of the most prized resources within the organization, i.e. the employees themselves. The HR Director would also form up plans and later on execute them for best possible mileage of the organization. It would mean that the shortcomings with the HR domains are taken care of in a proactive way and the strengths are cashed upon in an amiable manner as well. The HR Director would oversee the tasks of the HR manager and his team while finding solutions to keep them encouraged at all times (Sims, 2002). Overall, the HR Director will also play a significant role at liaising between the employees that are under his aegis, forming links of interaction and communication amongst them, and finding the reasons behind low employee morale. He will have a proactive eye on the falling standards of work conditions, and find a way to resolve the same. The HR Director will give his best within the HR domains on a regular basis and would be confident at all times. The HR Director would therefore play a very active role at forming serious links with the employees, and be present regularly at his office to set a personal example within the organization. 2. Create 10 questions that you can use to interview candidates for the position of HRM director at the company. The questions should include probes for additional information and desired responses. 1. Are you at complete understanding with how the HR policies change because our organization is a proactive one and wants to move towards newer pastures with the passing times? Would you go an extra mile to learn something new, considering you are getting hired for the HR Director post? 2. Would you be able to work in the form of a team that achieves its objectives in accordance with the work realms of one another or are you someone who believes in one-man-show for the sake of displaying authority and control? What is the reason behind being one of the two? 3. How closely in touch are you with the technological facets and realms? Have you had any computer and IT courses of late that could make you a better choice for the post of HR Director at this organization? 4. This job requires you to visit outdoor locations and to travel far and wide. Are you open to such an offer because the hiring and selecting regimes require the aspirants to be interviewed first hand before the HR department decides to hire them or otherwise? 5. What would it take to make your mark on the organizational philosophy that has come about of age with the passage of time? Would you go out of your way to make sure that the organization is your top most priority in professional terms? 6. Would you be open to a salary cut if and when the need arises? In times of today, this is a serious undertaking on the part of the organization and you should be ready for it to happen ...Download file to see next pagesRead More
Share:
Tags
Cite this document
(“Creating Job Descriptions and Interview Questions Essay”, n.d.)
Retrieved from https://studentshare.org/environmental-studies/1421660-creating-job-descriptions-and-interview-questions
(Creating Job Descriptions and Interview Questions Essay)
https://studentshare.org/environmental-studies/1421660-creating-job-descriptions-and-interview-questions.
“Creating Job Descriptions and Interview Questions Essay”, n.d. https://studentshare.org/environmental-studies/1421660-creating-job-descriptions-and-interview-questions.
Comments (0)
Click to create a comment or rate a document

CHECK THESE SAMPLES OF Creating Job Descriptions and Interview Questions

The limitation with fixed costs is that these are uncontrollable as these are normally ‘policy costs’. Fixed cost help in marginal costing in the sense that these costs enable us to identify break-even point, that the contribution needs to cover to reach at ‘no profit no loss’ level.

Variable costs are those costs that change within the same ratio in which the output or production changes. For example, in our study the direct Material cost and direct labour costs are variable cost. We have first calculated the these costs on per cabinet basis and then found total direct material or direct labour cost by multiplying per cabinet cost with total production of400 cabinets. This cost is called ‘...
6 Pages(1500 words)Case Study

The importance of job analysis in human resources is to help the management to ascertain and endorse the use of certain activities which take place in employment such as employment procedures such as training, choice of the appropriate employees, reparation as well as evaluation and appraisal. It helps in developing an organized database containing information concerning the job (Singh, P 2008 pp. 82-84).
Job analysis is significant into the employers when selecting the employees who are suitable for a particular position in the organization. In the recruitment process, it is usually possible to make mistakes with regard to employee selection. It enables the management to understand the content of advertisements for vacant po...
7 Pages(1750 words)Coursework

In a situational interview, the questions revolve around a given situation or scenario where the interviewee is supposed to answer what she will likely do in order to address the situation (Huffcutt et al. 2001, 619-620). The question...
6 Pages(1500 words)Coursework
sponsored ads
Save Your Time for More Important Things
Let us write or edit the essay on your topic "Creating Job Descriptions and Interview Questions" with a personal 20% discount.
GRAB THE BEST PAPER

Let us find you another Essay on topic Creating Job Descriptions and Interview Questions for FREE!