Comments (0)
Add to wishlistDelete from wishlist
Cite this document
Summary
To control the temper of the boy, his father provided him with a bag that was filled with nails. The father then instructed the boy that whenever he loses his temper, he should immediately act through hammering one…
Download full paperFile format: .doc, available for editing
HIDE THIS PAPERGRAB THE BEST PAPER91.1% of users find it useful 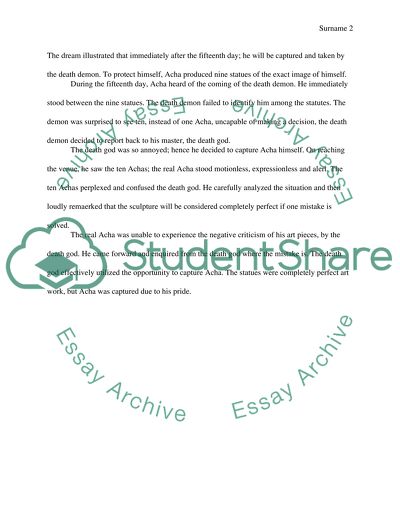 Lecturer Two Stories Bad Temper A little boy continuously experienced bad and improper temper. To control the temper of the boy, his father provided him with a bag that was filled with nails. The father then instructed the boy that whenever he loses his temper, he should immediately act through hammering one nail into a pole of the wooden fence.
At the end of the first day, 39 nails were hammered into the wooden fence by the boy. The hammering action continued over several weeks, and this made the boy understand how to manage his anger. The anger was controlled because the daily nail hammering gradually reduced as the week progressed. The boy realized that it is easier and simpler to control temper and anger, than to hammer the nails into the wooden fence.
Finally, the boy was capable of completely control his anger and temper. He informed his father concerning the new situation of experiencing no anger. The father ten directed the boy to remove the each nail, for the days he was incapable of managing his anger. The weeks passed, and finally the boy informed his father that all the nails have been removed from the wooden fence.
The father led his son by hand and led him to the wooden fence. He instructed his son to observe the holes left in the fence. The holes distorted the surface of the fence. In a similar situation, anger distorts and leaves a noticeable scar. The father informed the son that if he strikes somebody with a knife and immediately removes it; the wound will forever be there, despite numerous apologies to the victim.
Pride Ensures Destruction
Acha was a famous and renowned artist and sculptor in the ancient world. His sculptural work closely resembled the real inspirational object. On a certain day, Acha had a unique dream. The dream illustrated that immediately after the fifteenth day; he will be captured and taken by the death demon. To protect himself, Acha produced nine statues of the exact image of himself.
During the fifteenth day, Acha heard of the coming of the death demon. He immediately stood between the nine statues. The death demon failed to identify him among the statutes. The demon was surprised to see ten, instead of one Acha, uncapable of making a decision, the death demon decided to report back to his master, the death god.
The death god was so annoyed; hence he decided to capture Acha himself. On reaching the venue, he saw the ten Achas; the real Acha stood motionless, expressionless and alert. The ten Achas perplexed and confused the death god. He carefully analyzed the situation and then loudly remaerked that the sculpture will be considered completely perfect if one mistake is solved.
The real Acha was unable to experience the negative criticism of his art pieces, by the death god. He came forward and enquired from the death god where the mistake is. The death god effectively utilized the opportunity to capture Acha. The statues were completely perfect art work, but Acha was captured due to his pride. Read More
Share:
Tags
Cite this document
(“Two stories Essay Example | Topics and Well Written Essays - 500 words”, n.d.)
Retrieved from https://studentshare.org/english/1665541-two-stories

CHECK THESE SAMPLES OF Two stories

...? ANALYSIS OF TWO SHORT STORIES Prepared by ------------- Prepared for -------------- -------- Where Are You Going, Where Have You Been? Joyce Carol Oates Thesis statement The theme of the story “Where Are You Going, Where You Have Been?” revolves round the difference between the appearance and reality and between the amicable love and sexual violence. Theme of the story: The main idea of the story defines the line that exists between fantasy and reality. Fantasies are stunning, beautiful and pure while realities are harsh, cruel and brutal. It is portrayed through two main characters Connie and Arnold Friend. Connie is a fifteen years...
6 Pages(1500 words)Essay

Comparison Of Two Stories: The story of an hour by Kate Chopin and Death by Scrabble by Charlie Fish

...? Comparison Of Two Stories There are two stories which we’ll be taking into consideration. To begin with, let’s discuss the authors of both the stories. The first one is a short story “The story of an hour’’ by Kate Chopin. This story is popular mainly because of its surprise ending which shocked the readers. In this story the writer explores a theme for which she is famous for. The other story that we will be discussing is “Death by Scrabble” by Charlie Fish. By its title name we can guess that the story is related to the popular game ‘Scrabble’, the...
4 Pages(1000 words)Essay

A Narrative and Analysis of Two Stories

... Section/# A Narrative and Analysis of Two Stories Although both of the stories that have been viewed with regards to this particular essay could be interpreted as unrelated and of completely different subject matter, the fact of the matter is that both of these stories contribute to an understanding of the means by which humans engage in difficulty adversity and seek to overcome these. Whereas the first story was specifically centric upon the means by which an individual sought to escape the confines of an overly oppressive dictatorship, the second deals specifically with the means by which individual sought to conquer their own difficulties. Moreover, even though both of these stories deal with different subject matter, the fact... the...
4 Pages(1000 words)Essay

Distinct Characteristics in the Two Stories

...The two stories, The Seven Days Story and The Garden of Eden Story, demonstrate different characteristics of God, man and creation. In one, he creates everything perfect; in the other he tests man by placing him under testing circumstances. He even subjects them to punishment, thereby being a judge. Nevertheless, he is the creator, savior, and ruler according to both the stories. Man behaves differently under different circumstances, is also revealed through the two stories. The Seven Days Story begins with, “In the beginning God…..when the earth was without form…” on each day God adds to his creation...
5 Pages(1250 words)Research Paper

....). With this understanding, we will apply characterization in the analysis of two literary works, namely, “A Sorrowful Woman” and “The Story of an Hour”. A Sorrowful Woman First of all, it is worthy to mention the brilliance of the author in setting the mood of the story based on the description of the characters. There was tremendous strength in the clarity that each character displayed: the sorrowful woman, the loving husband, the energetic girl and the sweet little boy. The sorrowful woman did not get to enjoy the presence of a loving husband and a sweet little boy. She got overwhelmed with the responsibilities of taking care of her husband and child. The author said that, “the...
5 Pages(1250 words)Admission/Application Essay

... Desiree and Jig: Similarities and Differences. Ernest Hemingway’s “Hills Like White Elephants,” and Kate Chopin’s “Desiree’s Baby,” are short stories which revolve round the relationships between men and women. Jig, the protagonist of Hemingway’s narrative, is a modern, cosmopolitan woman, who is obviously in a live-in relationship with her unnamed partner. On the other hand, Desiree, the heroine of Chopin’s eponymous tale, is a woman of the traditional southern plantations. Both the narratives depict a crisis in the relationships: Jig’s abortion and Desiree’s mulatto baby. Jig’s partner and Armand Aubigny, Desiree’s husband, both reject the woman’s stand in this issue. While Desiree and Jig both love their partners and yearn... , “Oh,...
2 Pages(500 words)Essay

A Tale of Two Stories

...Exercise: A Tale of Two Stories Part I: When I was in high school, I was part of a group project that needed to collect the signatures of a few teachers. The other members of my group decided that it would take too long to go around and get every teacher to sign, so we should just forge the signatures. I did not like this idea at all because I knew that it would get us into serious trouble if it was ever found out. I spoke up and told everyone else that I would go and get the signatures because this did not sit right with me. Surprisingly my group was okay with this and so they allowed me to collect all the required signatures. What motivated me to speak up was that it wasnt really much difficulty to get...
2 Pages(500 words)Essay

...﻿Multiple Culture Identity: Comparison of Two Stories 1. Introduction: 1.1: Overview Cultural identity is the most overwhelming thing for a human being. The stories under consideration are A Good Fall and Brave We Are by Jin and Naqvi respectively. Both of these tales have a similarity which draws them together. In both stories a metamorphosis of identity is revealed. In Jin’s story the life and adjustment issues of an immigrant are discussed. The immense inferiority complex of immigrants is portrayed which help in understanding the dilemma of identity crisis. The enormous misery of identity catastrophe is discussed by the fact that living in America...
9 Pages(2250 words)Essay

8 Pages(2000 words)Essay
sponsored ads
Save Your Time for More Important Things
Let us write or edit the essay on your topic "Two stories" with a personal 20% discount.
GRAB THE BEST PAPER

Let us find you another Essay on topic Two stories for FREE!