Comments (0)
Add to wishlist Delete from wishlist
Cite this document
Summary
For example, three buttons, two cups and one more plate. Montessori education develops introductory concepts of arithmetic, such as understanding of numbers in relation to…
Download full paper File format: .doc, available for editing
HIDE THIS PAPERGRAB THE BEST PAPER98.5% of users find it useful 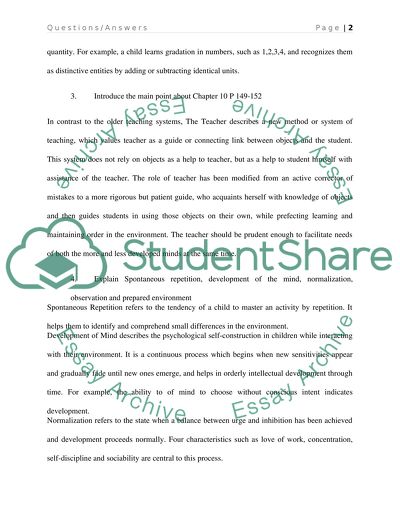 Question/Answers Explain Teaching of Numeration, introduction to Arithmetic, , Auto Education, Sensitive Periods and Absorbent mind The basics of concepts such as numeration or counting are already known to children at the age of three. For example, three buttons, two cups and one more plate. Montessori education develops introductory concepts of arithmetic, such as understanding of numbers in relation to each other, and to other concepts such as shape and size of objects.
Auto-Education refers to the child’s ability to construct ideas and concepts on his own by refining his senses through observation. For example, skip-counting and base ten operations are learned through constructing objects and observing them in relation to each other.
Sensitive Periods are durations of time during which the intensity of interest in specific objects in the environment is at its peak. The sensitivity and responsiveness to a particular stimuli declines with time. These periods indicate the opening of increased developmental opportunity.
Absorbent Mind refers to the ability of children to absorb information or impressions from surroundings through senses without involving effort.
2. Explain Arithmetic (Chapter 4 P 164-182)
Arithmetic is the knowledge of numbers and associated processes such as addition and subtraction, which is intuitively learned at early stages of childhood and developed gradually, through repetitive exercises, observation and experience. It helps the mind to distinguish and relate objects by means of symbols and ideas such as shape, space, identity, difference and quantity. For example, a child learns gradation in numbers, such as 1,2,3,4, and recognizes them as distinctive entities by adding or subtracting identical units.
3. Introduce the main point about Chapter 10 P 149-152
In contrast to the older teaching systems, The Teacher describes a new method or system of teaching, which values teacher as a guide or connecting link between objects and the student. This system does not rely on objects as a help to teacher, but as a help to student himself with assistance of the teacher. The role of teacher has been modified from an active corrector of mistakes to a more rigorous but patient guide, who acquaints herself with knowledge of objects and then guides students in using those objects on their own, while prefecting learning and maintaining order in the environment. The teacher should be prudent enough to facilitate needs of both the more and less developed minds at the same time.
4. Explain Spontaneous repetition, development of the mind, normalization, observation and prepared environment
Spontaneous Repetition refers to the tendency of a child to master an activity by repetition. It helps them to identify and comprehend small differences in the environment.
Development of Mind describes the psychological self-construction in children while interacting with their environment. It is a continuous process which begins when new sensitivities appear and gradually fade until new ones emerge, and helps in orderly intellectual development through time. For example, the ability to of mind to choose without conscious intent indicates development.
Normalization refers to the state when a balance between urge and inhibition has been achieved and development proceeds normally. Four characteristics such as love of work, concentration, self-discipline and sociability are central to this process.
Observation refers to the role of teacher in learning environment, in which she observes for purpose of guiding, prefecting and maintaining order. Prepared Environment describes a setting which contains selected materials for learning and encourages free activity. However it ensures cleanliness, maintenance of order, limitations in access to materials and free movement.
5. Introduce the main point about Chapter 19 P 276-279
In chapter 19, it has been argued that younger children are surprisingly capable of solving advanced arithmetic questions such as simple algebra, square root extractions of up to four figures and memorizing algebraic formulae for cube of binomial and trinomial. This capability was observed when children were provided with objects such as beads of colored glass, and a larger cube cut into unequal parts which were colored differently but in a specific order. By practice of arranging beads in different orders, children were soon able to perform four operations on numbers as large as thousands. Through rearranging and ascribing symbols to smaller unequal parts of the cube, children even memorized algebraic formula for cube of a trinomial. Thus, it was revealed that children can remember quantity and order through visual memory of objects.
6. How sensorial and practical life activities relate to Montessori Math curriculum, control of error, direct and indirect Aim of Montessori Math Materials
Sensorial activities includes geometric materials such as cubes, prisms and rods, which aim at refinement of child’s senses and stereognostic skills. The activities help the child in discriminating and identifying objects in relation to properties such as size, shape, color, texture and smell. These objects possess inherent mathematical value as well as control of error, which enables child to learn concepts such as accuracy and self-correction. Practical life activities include real materials and objects, which provide students with learning of concepts such as care of self, people and the environment, and help in development of abilities such as concentration, coordination and confidence. These activities promote physical and psychological independence in children, and include a direct and an indirect aim. For example, the direct aim involved in a flower arrangement activity is to learn the art of arranging objects in a specific order. The indirect aim relates to the math curriculum, such as visually estimating length of stem of a flower that has to be placed in a vase with particular space and length. Read More
Share:
Tags
Cite this document
(“Math Essay Example | Topics and Well Written Essays - 500 words - 3”, n.d.)
Retrieved from https://studentshare.org/education/1691989-math

CHECK THESE SAMPLES OF Math

... need to get a broader perception about the context implied. Lockhart’s comparison of math to art proves strong since the involved teacher could have broken the surface area of a cylinder as the sum of the surface area of the two circles (at the top and bottom) plus that of the area of the triangle (2?rh). Considering the nature of math teaching, the educators should be fully responsible for making math interesting to the kids. The educators have failed in recovering the need for studying and embracing math. The curriculum accentuates that the only expectation from math education is to perform well in the subject while living out the need for real knowledge useful in the long run. It orients the students to believe that cracking the exams...
4 Pages (1000 words) Essay

... XXXXX Number: XXXXX XXXXX XXXXXX XXXXX of XXXXX XX – Jun - 2010 Mathematics - Assignment A. What kind of correlation do you expect to find between annual income and amount spent on car? Will it be positive or negative? Will it be a strong relationship? Base your answer on your personal guess as well as by looking through the data. The two variables, annual income and amount spent on car are expected to have a positive correlation. The main reason is that when the income is higher, people tend to spend more on their cars. Moreover, the relationship between the two variables is expected to be strong. Based on the data given, it is evident that the annual income and the amount spent on car are directly proportional to one... XXXXX Number:...
4 Pages (1000 words) Essay

...plain the true meaning of the question, this certainly would yield erroneous output based on conclusions produced. Conclusion The first problem has shown with evidence how confusing words may help establish an enticing propaganda for a skincare commodity. Similarly, the second problem has demonstrated how double negatives within queries may likely create variable responses leading to data of errors due to misinterpretation of the query itself. Out of these exercises, one would observe that often, statistical misrepresentations are intentionally utilized for marketing claims or ideas that improve an organization’s economy or advocacy. Reference Sobecki, Dave et al. (2010). Math in Our World. 2nd ed. McGraw-Hill...
1 Pages (250 words) Speech or Presentation

... such info is provided in the ‘Graphing Calculator Help’ and the ‘review’ tab provides summarised content that may be needed while dealing with mathematical problems. ‘Support for technology’ tab also includes useful guides for using the graphic calculator and working on MS Excel. ‘The extended applications tab provides various case studies where the mathematical tools are utilised for solving problems in the real world. The mathematical application in the management sciences and social sciences fields is discussed in ‘Diagraphs and networks’. The interactive figures tab is yet to be provided to the students as it is mentioned there ‘coming soon’ (Tools for success). There are different advantages of My Math Lab, some of these are; It helps...
1 Pages (250 words) Lab Report

...Math... Math Teachers have no alternative but to keep their professional development and learning how to improve themselves. This results from the fact continuous professional development is useful in sharpening their teaching skills in the classroom setting as well as keeping them updated with the developments in their specific professions (Harwell, 2003). Among the ways that the educators can boost their professional development is by attending workshops that offer them the opportunity to meet other professionals and discuss on different themes that can help them engage learners in classroom activities in an appropriate way (Harwell, 2003). Secondly, the teachers may opt to enroll for a course that offers them an opportunity to learn more ...
1 Pages (250 words) Research Paper
sponsored ads
Save Your Time for More Important Things
Let us write or edit the essay on your topic "Math" with a personal 20% discount.
GRAB THE BEST PAPER

Let us find you another Essay on topic Math for FREE!