Comments (0)
Add to wishlistDelete from wishlist
Cite this document
Summary
Adopting flexible patterns; this implies that all members are to use patterns which allow easy additions and omission of some parts in the process of implementation of operational procedures to ensure proper service delivery. This can be achieved by learning new skills in line…
Download full paperFile format: .doc, available for editing
HIDE THIS PAPERGRAB THE BEST PAPER91.6% of users find it useful 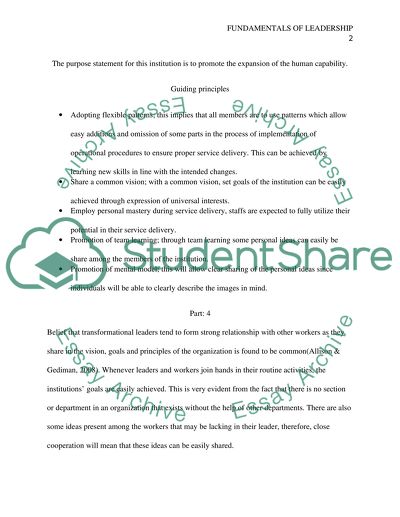 FUNDAMENTALS OF LEADERSHIP The purpose ment for this is to promote the expansion of the human capability.
Guiding principles
Adopting flexible patterns; this implies that all members are to use patterns which allow easy additions and omission of some parts in the process of implementation of operational procedures to ensure proper service delivery. This can be achieved by learning new skills in line with the intended changes.
Share a common vision; with a common vision, set goals of the institution can be easily achieved through expression of universal interests.
Employ personal mastery during service delivery, staffs are expected to fully utilize their potential in their service delivery.
Promotion of team learning; through team learning some personal ideas can easily be share among the members of the institution.
Promotion of mental model; this will allow clear sharing of the personal ideas since individuals will be able to clearly describe the images in mind.
Part: 4
Belief that transformational leaders tend to form strong relationship with other workers as they share in the vision, goals and principles of the organization is found to be common(Allison & Gediman, 2008). Whenever leaders and workers join hands in their routine activities, the institutions’ goals are easily achieved. This is very evident from the fact that there is no section or department in an organization that exists without the help of other departments. There are also some ideas present among the workers that may be lacking in their leader, therefore, close cooperation will mean that these ideas can be easily shared.
Beliefs that leaders do things that other people do not do or have not done needs, to be re-examined as not all leaders do very unique things, but instead do normal things in a unique way to ensure that goals are achieved by abiding to the prevailing principles.
Reference
Allison, J., & Gediman, D. (2008). This I believe II: more personal philosophies of remarkable men and women. New York: Henry Holt. Read More
Share:
Tags
Cite this document
(“Read the papers about senge and answer part 3 and 4 Essay”, n.d.)
Read the papers about senge and answer part 3 and 4 Essay. Retrieved from https://studentshare.org/education/1593628-read-the-papers-about-senge-and-answer-part-3-and-4

“Read the Papers about Senge and Answer Part 3 and 4 Essay”, n.d. https://studentshare.org/education/1593628-read-the-papers-about-senge-and-answer-part-3-and-4.
Comments (0)
Click to create a comment or rate a document

For a new chocolate bra...

...). This was for the first time that humanity was realizing that CO2 was the major gas responsible for about half the creation of greenhouse effect. The report also called for a conscious reduction of such gas emissions by controlling human activities that caused them. The report was very precise in terms of the prediction about temperature enhancement. The projection of the available data into the future years led the authors (Houghton, Jenkins and Ephirams, 1990) of this study to predict that global mean temperature will increase by 0.3 oC per decade during the 21st century. The shocking part of this prediction was that this kind of a temperature increase had never happened within the time span of past 10,000 years (Houghton, Jenkins...
6 Pages(1500 words)Literature review

Religion clearly plays a dramatic role in the Middle East. The truth is that nationalism also plays a huge role. The conflict has a long and bloody history and many people have tried and failed to solve it before. Nothing new has happened in the last few years to make it any easier to solve. In fact, some things have gotten quite a bit worse. There is little visionary leadership available on either side. As things stand now, it is unlikely this conflict will be resolved. The two sides are intractably opposed to one other. Furthermore, the Arab world is poorly developed...
6 Pages(1500 words)Assignment
sponsored ads
Save Your Time for More Important Things
Let us write or edit the essay on your topic "Read the papers about senge and answer part 3 and 4" with a personal 20% discount.
GRAB THE BEST PAPER

Let us find you another Essay on topic Read the papers about senge and answer part 3 and 4 for FREE!