Comments (0)
Add to wishlistDelete from wishlist
Cite this document
Summary
These challenges include; students not doing their homework due to several challenges. Mickey a student is not able to complete his homework can be assisted in several ways. There is no…
Download full paperFile format: .doc, available for editing
HIDE THIS PAPERGRAB THE BEST PAPER98.4% of users find it useful 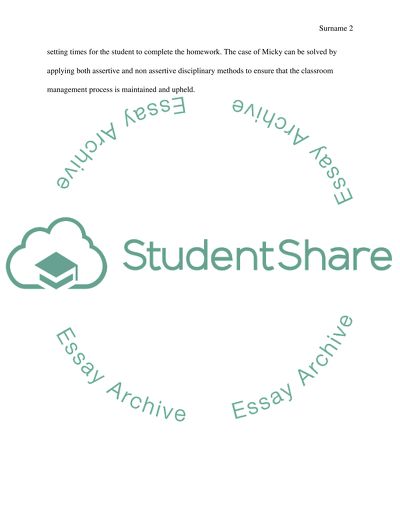 Case study: room Management The room setup presents a variety of challenges that can be addressed invarious ways. These challenges include; students not doing their homework due to several challenges. Mickey a student is not able to complete his homework can be assisted in several ways. There is no parental guidance for the student due to second shift done by his mother. There is a variety of tools that ensure proper building of classroom climate. These tools may not relate to the discipline phrases such as “spare the rod and spoil the child” or “children should be seen and not heard.” For successful classroom management, the development of interpersonal relationships is a must. These relationships take time to build because nothing else done prepares the teacher for the classroom set up ( Butchart Ronald E. and McEwan Barbara 32). Micky’s case requires development of interpersonal relationship with the student. Owing to the prevailing conditions at home Micky will need to be assisted by using detention. This will instill discipline also solve the problem of not doing his homework. The use of detention is for correctional process and should not be practiced regularly (Moore 419). As stated by Tauber (92), there is no single course for discipline that can be effectively applied this situation. The assertive discipline can be used to develop Micky because it encourages the teacher to appreciate the work of the student by complimenting him daily for positive deed (Tauber 92). For Mickys case, he can be complimented for completing his homework. Despite the application of assertive discipline, there is a need for the teacher to assist the student in doing homework by either tutoring, or setting times for the student to complete the homework. The case of Micky can be solved by applying both assertive and non assertive disciplinary methods to ensure that the classroom management process is maintained and upheld.
Works Cited
Butchart Ronald E. and McEwan Barbara . Classroom discipline in American schools: problems and possibilities for democratic education. New York: SUNY Press, 1998. Print.
Moore, Kenneth. Effective instructional strategies:from theory to practice. CA: Thousand oaks , 2005. Print.
Tauber, Robert T. Classroom management: sound theory and effective practice. New York,NY: Greenwood Publishing Group, 2007. Print Read More
Share:
Tags
Cite this document
(“Case study Essay Example | Topics and Well Written Essays - 250 words - 6”, n.d.)
Retrieved from https://studentshare.org/education/1586081-case-study

Justine could either claim under “like work,” “work rated as equivalent,” or “work of equal value.” A claim under the “like work” provision of the Equal Pay Act 1970 is laid down in s 1(2...
9 Pages(2250 words)Case Study
sponsored ads
Save Your Time for More Important Things
Let us write or edit the essay on your topic "Case study" with a personal 20% discount.
GRAB THE BEST PAPER

Let us find you another Essay on topic Case study for FREE!