Comments (0)
Add to wishlistDelete from wishlist
Cite this document
Summary
This paper declares that since 1997 the government has been taking steps to raise the standards of secondary and post secondary education, with an aim of continued education until the age of 18, for which it has been making substantial investments in school…
Download full paperFile format: .doc, available for editing
HIDE THIS PAPERGRAB THE BEST PAPER97.2% of users find it useful 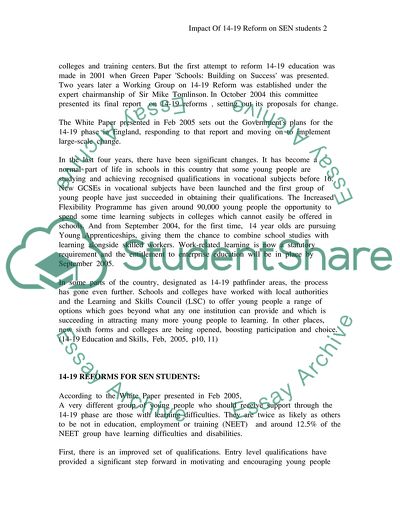 Extract of sample "Impact Of 14-19 Reform on SEN Students"

Download file to see previous pages As the report stresses in the last four years, there have been significant changes. It has become a normal part of life in schools in this country that some young people are studying and achieving recognised qualifications in vocational subjects before 16. New GCSEs in vocational subjects have been launched and the first group of young people have just succeeded in obtaining their qualifications. The Increased Flexibility Programme has given around 90,000 young people the opportunity to spend some time learning subjects in colleges which cannot easily be offered in schools. And from September 2004, for the first time, 14 year olds are pursuing Young Apprenticeships, giving them the chance to combine school studies with learning alongside skilled workers. Work-related learning is now a statutore requirement and the entitlement to enterprise education will be in place by September 2005.
This discussion explores that in some parts of the country, designated as 14-19 pathfinder areas, the process has gone even further. Schools and colleges have worked with local authorities and the Learning and Skills Council (LSC) to offer young people a range of options which goes beyond what any one institution can provide and which is succeeding in attracting many more young people to learning. In other places, new sixth forms and colleges are being opened, boosting participation and choice. ...Download file to see next pagesRead More
Share:
Tags
Cite this document
(“Impact Of 14-19 Reform on SEN Students Essay Example | Topics and Well Written Essays - 1750 words”, n.d.)
Impact Of 14-19 Reform on SEN Students Essay Example | Topics and Well Written Essays - 1750 words. Retrieved from https://studentshare.org/education/1535734-impact-of-14-19-reform-on-sen-students

Chapter 5: Conclusions: This chapter will detail the conclusions of the research and will also include the recommendations by the researcher. The limitations of this research will also be included and further research recommendations for the same will also be included.
Human resource managers have a major impact on organizations and they hold a very responsible position. The duties of the HR managers are to ensure that the organization employs the right set of employees and there is also a good mix of skills within the organization. It is also to ensure that all the activities and processes relating to the employees are handled and completed in sync with the culture, values, and mission of the company.
The main reason to...
8 Pages(2000 words)Assignment
sponsored ads
Save Your Time for More Important Things
Let us write or edit the essay on your topic "Impact Of 14-19 Reform on SEN Students" with a personal 20% discount.
GRAB THE BEST PAPER

Let us find you another Essay on topic Impact Of 14-19 Reform on SEN Students for FREE!