Comments (0)
Add to wishlistDelete from wishlist
Cite this document
Summary
The author has tried to explain a growing issue in the transition from middle school to high school. The author has focused on how the adolescents are faced with high levels of changes both in terms of their own bodies as well as the changes in terms of school environment, school locations, newer learning and teaching patterns…
Download full paperFile format: .doc, available for editing
HIDE THIS PAPERGRAB THE BEST PAPER91.6% of users find it useful 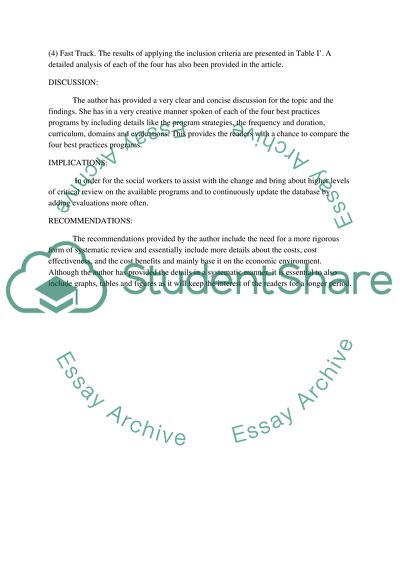 Extract of sample "Transition from Middle to High School"

Article Best Practice Program for Low-Income African American Transitioning from Middle to High School Carolyn Gentle - Genitty
Reference:
Gentle-Genitty, C. (2009). Best Practice Program for Low-Income African American Students Transitioning from Middle to High School. National As'ociation of Social Workers , 109 - 117.
PURPOSE:
The author has tried to explain a growing issue in the transition from middle school to high school. The author has focused on how the adolescents are faced with high levels of changes both in terms of their own bodies as well as the changes in terms of school environment, school locations, newer learning and teaching patterns. The changes from childhood to adulthood can be very overwhelming and can cause a number of issues for the youth.
METHOD:
The author has used a very different methodology for this article. She explains, 'Researchers often use systematic reviews to gather evidence about best practices. In support of evidence-based practices, various Web-based collections of "best practices'" are now available, but not all programs included in such databases have been rigorously tested. Three databases that included programs broad enough to be useful in a school setting were selected. Criteria to screen and then assess available studies were used according to the process set out by the Evidence for Policy and Practice Information and Co-ordinating Centre {EPPI-Centre)
for non quantitative review's-search, screen, describe, map and refine and appraise and synthesize'. The author has also provided a clear paragraph on the method used for screening and the criteria used for exclusion and inclusion as well.
FINDINGS/ RESULTS:
The research findings of the article have highlighted that after 246 programs were located and the initial screening criteria were met, almost 242 were excluded based on the criteria. The four which were left out are as follows: '( I ) School Transitional Environmental Program (STEP); (2) Skills, Opportunity, and recognition (SOAR), formerly Seattle Social Development Project; (3) Positive Action through Holistic Education (Project PATHE), and (4) Fast Track. The results of applying the inclusion criteria are presented in Table I'. A detailed analysis of each of the four has also been provided in the article.
DISCUSSION:
The author has provided a very clear and concise discussion for the topic and the findings. She has in a very creative manner spoken of each of the four best practices programs by including details like the program strategies, the frequency and duration, curriculum, domains and evaluations. This provides the readers with a chance to compare the four best practices programs.
IMPLICATIONS:
In order for the social workers to assist with the change and bring about higher levels of critical review on the available programs and to continuously update the database by adding evaluations more often.
RECOMMENDATIONS:
The recommendations provided by the author include the need for a more rigorous form of systematic review and essentially include more details about the costs, cost effectiveness, and the cost benefits and mainly base it on the economic environment. Although the author has provided the details in a systematic manner, it is essential to also include graphs, tables and figures as it will keep the interest of the readers for a longer period. Read More
Share:
Tags
Cite this document
(“Transition from Middle to High School Essay Example | Topics and Well Written Essays - 500 words”, n.d.)
Retrieved from https://studentshare.org/education/1528187-transition-from-middle-to-high-school

CHECK THESE SAMPLES OF Transition from Middle to High School

Christianity Transition From Superstition to Religio

After Christianity had gone through various transitions and reformation; after it had confronted and overcome all the challenges that it had faced, what results is a polished, spiritually stimulating and that is more universally accepted and acclaimed. The Christian religion has not only taught the purest and sublimest code of morals ever known among men, but actually exhibited it in the life sufferings and death of its founder and true followers. (“Literary Contest”)
In the Roman context, religio is defined as the “proper reasonable awe of the gods.” (“Reclaiming”) The primary characteristics of the Roman tradition were conserved virtually unchanged in ritual practices. Looking at its hist...
8 Pages(2000 words)Coursework

... Women in the Middle East did not have access to formal educationwomen have always been a controversial subject since the history of mankind. The status, power of women and human rights are very new concepts that do not have a very long persistence. Before the advent of these concepts women were considered to be sheeps in a herd that had to obey their shepherds commands irrespective of their own will or personal choice. They were not considered mortal and were dwelling on the mercy of their males that were considered to be supreme power in their male governed society. It is not wrong to say that the status of women particularly in Asia was very depressing. They were oppressed and were...
6 Pages(1500 words)Coursework

...People from high-context and low-context cultures may find it difficult to understand one another. Choose 2-3cultures as examples and explain why potential difficulties might arise. Name University Introduction The current world is considered as a global village. Technology has made it possible for people from different nationalities, race, and cultural background to come much closer to one another. Besides, it is possible for people from these diverse origins to work together and increase their levels of communication on a daily basis. These approaches are exciting because they help people interact and learn different cultures and social aspects from the diverse cultures and the people representing the diversity. However...
6 Pages(1500 words)Assignment
sponsored ads
Save Your Time for More Important Things
Let us write or edit the essay on your topic "Transition from Middle to High School" with a personal 20% discount.
GRAB THE BEST PAPER

Let us find you another Essay on topic Transition from Middle to High School for FREE!