Comments (0)
Add to wishlistDelete from wishlist
Cite this document
Summary
Computers have become a standard feature in preschool, kindergarten and primary grades as a teaching aide. In the competitive age that we live in with strong emphasis on achievement, many educators see computer use as a way to accelerate progress in education…
Download full paperFile format: .doc, available for editing
HIDE THIS PAPERGRAB THE BEST PAPER97.3% of users find it useful 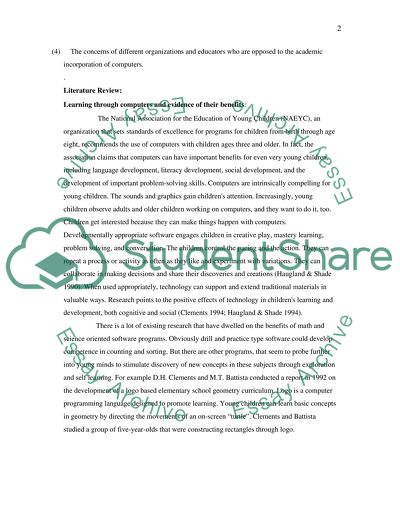 Download file to see previous pages Computers have become a standard feature in preschool, kindergarten and primary grades as a teaching aide. In the competitive age that we live in with strong emphasis on achievement, many educators see computer use as a way to accelerate progress in education.At home too, most parents feel compelled to follow this trend and purchase personal computers for their children in order to make them better prepared for their technology exposure at school and outside. Market researchers tracking software trends have identified that the largest software growth recently has been in new titles and companies serving the early childhood educational market. Even as early as 1996, SPA consumer market report found that of the people who own home computers and have young children, 70% had purchased educational software for their children to use .An estimated $50 million was spent on software programs for young children in 2001. The percentage today could only have increased judging by the omnipresence of computers in schools and homes. Parents and educators seem to be so eager to incorporate technology in education that many of them are introducing computers to children at younger ages to not only motivate them to get a head start on academics but also for their careers in later life. For example, lapware, a software program intended for children under 18 months of age was first introduced in the late 1990s ,to stimulate the brains of children as young as 6 months while they sit on the lap of their parent. Understandably, not all psychologists and educators are thrilled at the idea of using computers as an introduction to academic concepts and have raised questions about its effectiveness and also emotional and physical side effects.
Abstract:
The literature review that is done in this paper attempts to address several issues related to the academic use of computers with young children. We will study existing articles and research already done on the subject to achieve a better understanding and evaluate the different aspects related to the topic. They are:
(1) the integration of technology into the typical learning environment and the potential benefits of appropriate use of technology in early childhood programs
(2) the essential role of adults in evaluating appropriate uses of technology;
(3) Appropriate Computer activities
(4) The concerns of different organizations and educators who are opposed to the academic incorporation of computers.
.
Literature Review:
Learning through computers and evidence of their benefits:
The National Association for the Education of Young Children (NAEYC), an organization that sets standards of excellence for programs for children from birth through age eight, recommends the use of computers with children ages three and older. In fact, the association claims that computers can have important benefits for even very young children, including language development, literacy development, social development, and the development of important problem-solving skills. Computers are intrinsically compelling for young children. The sounds and graphics gain children's attention. Increasingly, young children observe adults and older children working on computers, and they want to do it, too. Children get interested because they can make things happen with computers. Developmentally appropriate software engages children in creative play, mastery learning, problem solving, and conversation. The children control the pacing and the action. They can repeat a process or activity as often as they like and experiment with variations. They can collaborate in making decisions and share their discoveries and creations (Haugland & Shade 1990). When used appropriately, technology can support and extend traditional materials in valuable ways. Research points to the positive effects of technology in children's learning and development, both cognitive ...Download file to see next pagesRead More
Share:
Tags
Cite this document
(“Use of omputer in academic development of children during their Essay”, n.d.)
Retrieved from https://studentshare.org/education/1521832-use-of-omputer-in-academic-development-of-children-during-their-primary-years

(Use of Omputer in Academic Development of Children During Their Essay)
https://studentshare.org/education/1521832-use-of-omputer-in-academic-development-of-children-during-their-primary-years.

“Use of Omputer in Academic Development of Children During Their Essay”, n.d. https://studentshare.org/education/1521832-use-of-omputer-in-academic-development-of-children-during-their-primary-years.
Comments (0)
Click to create a comment or rate a document

In particular, the impact of the digital revolution and the growth of numerous multimedia streams on cultural norms has challenged classical theory propounding the fu...

Although walking is frequently dismissed as too easy or not difficult enough by fitness experts, the exercise itself bestows just as much benefit to the exerciser as jogging or running, with less of the jarring effects of more intense locomotion. This leads to a dramatically lower dropout rate of participants, meaning staying motivated is simpler on a walking regimen. Jogging, in contrast, requires additional effort without statistically significant improvements in time used in the workout, which leads to questions of whether walking or jogging is the more beneficial activity given the same resources. Based on the evidence that negates claims of an advantage for jogging, and evidence that jogging can lead to damage of body structu...
7 Pages(1750 words)Assignment

Grown-ups habitually recognize, directly after meeting someone, what form of communication is about to take place, and what the limitations restricting the communication will be (Sutton-Smith & Ariel, 2002). Because role-play conversation takes place in a fantasy, staged world, it is less hampered by physical and social reality.
Between the ages of 5 and 7, children gain a broad array of social and cognitive abilities (Amsel & Byrnes, 2002). Psychologists have discovered that these are formative years for the growth of mind theories, the growth of the ability to construct and represent stories, the growth of social cognition, the growth of the personality, the growth of advanced fantasy play, and the growth of intersu...
9 Pages(2250 words)Case Study
sponsored ads
Save Your Time for More Important Things
Let us write or edit the essay on your topic "Use of omputer in academic development of children during their primary years" with a personal 20% discount.
GRAB THE BEST PAPER

Let us find you another Essay on topic Use of omputer in academic development of children during their primary years for FREE!