Comments (0)
Add to wishlistDelete from wishlist
Cite this document
Summary
This essay presents pastoral care, as decisive to academic achievement as its successful implementation may be, which is patently an elusive subject to configure and bring together. Clarifying the concept may shed light on a better implementation of pastoral initiatives and pin down its imperatives…
Download full paperFile format: .doc, available for editing
HIDE THIS PAPERGRAB THE BEST PAPER95% of users find it useful 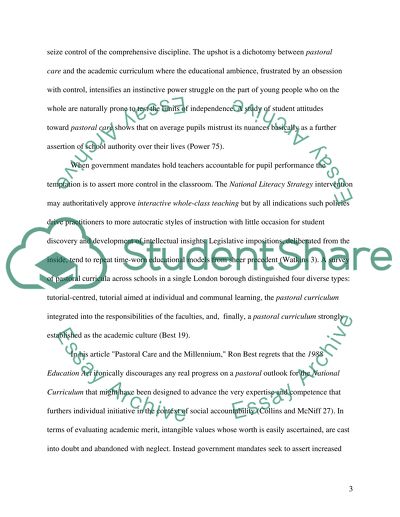 Download file to see previous pages According to the report findings Pastoral Care, rather than the aggregate of actions or exercises that employ its practitioners over time, in essence is the underlying impetus for the care in its implementation. Effective Pastoral Care facilitates optimal education by cultivating open communication between students and practitioners as well as carers and parents. Through discrete consultation and positive attention to the student's personal learning style, pastoral care serves to augment the greatest prospects for quality realisation of each pupil's best. When a pastoral curriculum  succeeds in promoting good relations and feedback in the academic process among all participants, it is an operative element of successful education of the whole person.

From this discussion it is clear that significant research currently indicates that academic structures operating under the auspices of pastoral care can quite easily relapse into an academic exercise less focused on aspects of student welfare than issues of social management and organizational expediency, carving a considerable gap between lip-service and actuality. Distortions of pastoral care transpire when perfunctory notions of education seize control of the comprehensive discipline. The upshot is a dichotomy between pastoral care and the academic curriculum where the educational ambience, frustrated by an obsession with control, intensifies an instinctive power struggle on the part of young people who on the whole are naturally prone to test the limits of independence.  A study of student attitudes toward pastoral care shows that on average pupils mistrust its nuances basically as a further assertion of school authority over their lives (Power 75).
When government mandates hold teachers accountable for pupil performance the temptation is to assert more control in the classroom. The National Literacy Strategy intervention may authoritatively approve interactive whole-class teaching but by all indications such policies drive practitioners to more autocratic styles of instruction with little occasion for student discovery and development of intellectual insights. Legislative impositions, deliberated from the inside, tend to repeat time-worn educational models from sheer precedent (Watkins 3). A survey of pastoral curricula across schools in a single London borough distinguished four diverse types: tutorial-centred, tutorial aimed at individual and communal learning, the pastoral curriculum integrated into the responsibilities of the faculties, and, finally, a pastoral curriculum strongly established as the academic culture (Best 19).
In his article "Pastoral Care and the Millennium," Ron Best regrets that the 1988 Education Act ironically discourages any real progress on a pastoral outlook for the National Curriculum that might have been designed to advance the very expertise and competence that furthers individual initiative in the context of social accountability (Collins and McNiff 27). In terms of evaluating academic merit, intangible values whose worth is easily ascertained, are cast into doubt and abandoned with neglect. Instead ...Download file to see next pagesRead More
Share:
Tags
Cite this document
(“School's Pastoral Structure and Pupil Achievement Essay”, n.d.)
Retrieved from https://studentshare.org/education/1508789-schools-pastoral-structure-and-pupil-achievement

CHECK THESE SAMPLES OF School's Pastoral Structure and Pupil Achievement

The best possible outcome for SA is when it plays L while SS plays U and the best possible outcome for SS is when it plays L, and the other plays U. These outcomes (L, U) and (U, L) are difficult to achieve. This is because these strategies are not dominant for both. There is an incentive for one player to deviate.
If the prices are decided every week then the strategy would change in terms of the components. For the repeated games, the Nash equilibriums of all the sub-games are the same as the equilibrium of each one-shot game. The number of components in the strategy would increase because of the repetition of the game (both would still play L, L) however the pay off associated with the game would be increase by times of th...
6 Pages(1500 words)Essay
sponsored ads
Save Your Time for More Important Things
Let us write or edit the essay on your topic "School's Pastoral Structure and Pupil Achievement" with a personal 20% discount.
GRAB THE BEST PAPER

Let us find you another Essay on topic School's Pastoral Structure and Pupil Achievement for FREE!