Comments (0)
Add to wishlistDelete from wishlist
Cite this document
Summary
Characteristics & Support of Effective Coaching & Mentoring Grade Course (29th, April. 2013) The expectations on characteristics and types of support offered by an effective coach or mentor The fundamental concept that an effective coaches need to cultivate in their members is the concept of trust (Knight, 2008)…
Download full paperFile format: .doc, available for editing
HIDE THIS PAPERGRAB THE BEST PAPER92.7% of users find it useful 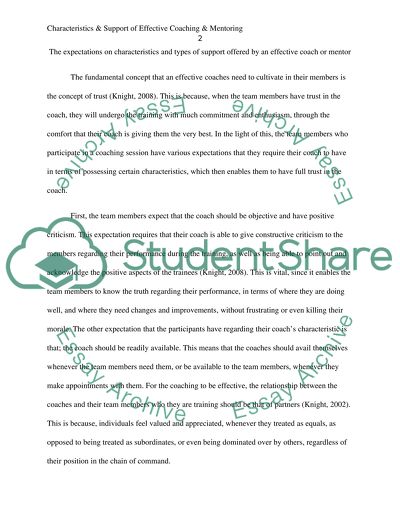 Download file to see previous pages First, the team members expect that the coach should be objective and have positive criticism. This expectation requires that their coach is able to give constructive criticism to the members regarding their performance during the training, as well as being able to point out and acknowledge the positive aspects of the trainees (Knight, 2008). This is vital, since it enables the team members to know the truth regarding their performance, in terms of where they are doing well, and where they need changes and improvements, without frustrating or even killing their morale. The other expectation that the participants have regarding their coach’s characteristic is that; the coach should be readily available. This means that the coaches should avail themselves whenever the team members need them, or be available to the team members, whenever they make appointments with them. For the coaching to be effective, the relationship between the coaches and their team members who they are training should be that of partners (Knight, 2002). This is because, individuals feel valued and appreciated, whenever they treated as equals, as opposed to being treated as subordinates, or even being dominated over by others, regardless of their position in the chain of command. Thus, to make the coaching more effective, the trainees require to have the freedom to make choices regarding certain aspects of the coaching, and requires the coach to honor their choices, being a partner to the coaching exercise (Knight, 2008). This way, the members of the team being coached requires the coach to be available when they need him, or whenever they make an appointment with the coach. This is also aligned with the principle of punctuality as one of the expectations that the participants would expect their coach to have. The participants in the coaching sessions expect that the coach will be available in good time, when they set such time. The availability and the punctuality of the coach are the two characteristics that are fundamental for effective coaching, since they go a long way in enhancing the trust that the team members will have on their coach (Knight, 2008). The other important expectation that the participants have regarding the characteristics of the coach is that; the coach should be knowledgeable in the subject matter. There is nothing that commands respect and trust more, than an individuals’ competency and demonstrated knowledge and ability in the field of specialization of the individuals. Thus it is through being highly knowledgeable in the subject matter, that a coach is able to win the trust of the participants, since they have the comfort that they are gaining the best (Lipton & Wellman, n.d.). This motivates the individuals to be even more enthusiastic and committed to learning, considering that they have the belief that they are achieving the best. However, the most significant expectation of the participants regarding the characteristics of the coach is that the coach will have good listening skills, and thus be able to give them positive emotional support. Listening skills are vital for coaching, considering that they enable the coach to learn the team members, including their strengths and weaknesses, and thus enable the coach ...Download file to see next pagesRead More
Share:
Tags
Cite this document
(“Reflection paper - Characteristics & Support of Effective Coaching & Essay”, n.d.)
Retrieved from https://studentshare.org/education/1476360-reflection-paper-characteristics-support-of
(Reflection Paper - Characteristics & Support of Effective Coaching & Essay)
https://studentshare.org/education/1476360-reflection-paper-characteristics-support-of.
“Reflection Paper - Characteristics & Support of Effective Coaching & Essay”, n.d. https://studentshare.org/education/1476360-reflection-paper-characteristics-support-of.
Comments (0)
Click to create a comment or rate a document

Emily's immediate supervisor deems her ‘over-enthusiasm’ as an impediment to her efficiency at work. Thus, she is recommended to lessen the time she spends for every patient.
Although she understands her supervisor’s recommendation from a business operation’s point-of-view, she is still adamant in her belief that gaining customer insights is crucial in aiding the pharmacy in better developing its line-up of medicinal offers. Carrying this burden, Emily consults her mentor in The Medical Nation, Dr Hussa Al Husine.
The mentoring session with Dr Husine happens twice a week for three weeks after Emily’s daily working period. Even without having a firm background in professional coaching, Emily thin...
10 Pages(2500 words)Coursework
sponsored ads
Save Your Time for More Important Things
Let us write or edit the essay on your topic "Reflection paper - Characteristics & Support of Effective Coaching & Mentoring" with a personal 20% discount.
GRAB THE BEST PAPER

Let us find you another Essay on topic Reflection paper - Characteristics & Support of Effective Coaching & Mentoring for FREE!