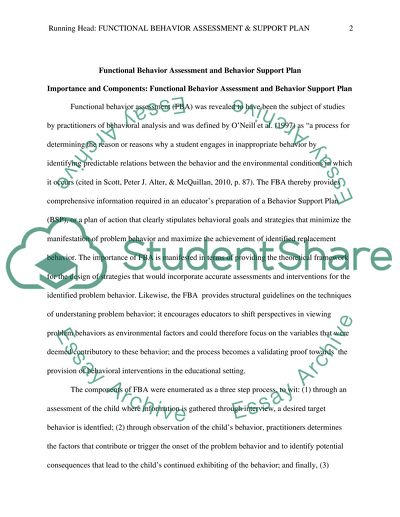 Download file to see previous pages 87). The FBA thereby provides comprehensive information required in an educator’s preparation of a Behavior Support Plan (BSP), or a plan of action that clearly stipulates behavioral goals and strategies that minimize the manifestation of problem behavior and maximize the achievement of identified replacement behavior. The importance of FBA is manifested in terms of providing the theoretical framework for the design of strategies that would incorporate accurate assessments and interventions for the identified problem behavior. Likewise, the FBA provides structural guidelines on the techniques of understaning problem behavior; it encourages educators to shift perspectives in viewing problem behaviors as environmental factors and could therefore focus on the variables that were deemed contributory to these behavior; and the process becomes a validating proof towards the provision of behavioral interventions in the educational setting. The components of FBA were enumerated as a three step process, to wit: (1) through an assessment of the child where information is gathered through interview, a desired target behavior is identfied; (2) through observation of the child’s behavior, practitioners determines the factors that contribute or trigger the onset of the problem behavior and to identify potential consequences that lead to the child’s continued exhibiting of the behavior; and finally, (3) practitioners identify the function that the behavior serves and the specific variables that trigger and reinforce the exhibited behavior (Weber, Killu, Derby, & & Barretto, 2005). Situation Requiring a Functional Behavior Assessment (FBA) and Behavior Support Plan (BSP) 1. Description of Problem Behaviors: A 10-year old student, Lucy Chu, perceived that she has not been exhibiting good grades in English. When English class comes, she makes it a point to excuse herself using different reasons such as going to the wash room; needing to go to the clinic; not have slept well the previous night and therefore feels extremely sleepy. As a result, the more that her academic performance falls below par and her frequent excuses makes her miss most of the required modules. 2. Identification of Events, Times, and Situations that Predict the Occurrence and Nonoccurrence of the behavior: During English class, Lucy Chu, would quietly sit on her chair and listen to the lessons and instructions that would be discussed during the subject. When the teacher informs the class that there is a need for students to verbally relay their experiences, read out their written essays, or participate in a class discussion, Lucy would approach the teacher to state that she needs to be excused from the class due to different reasons, identified above. Depending on the remaining time frame for the subject, she would see to it that she maximizes her time out from the classroom and only to return to class just before the next subject. In other class subject that does not require speaking in front of the class in English, the behavior is not manifested. 3. Identification of Antecedents, Consequences, and Reinforcers that Maintain the Behavior: An FBA would determine the factors that lead to Lucy’s behavior. Antecedents would be the influencing factors or events in the environment that spurred the problem behavior. The English teacher, in this situation, could conduct the FBA to determine ...Download file to see next pagesRead More
Share:
Tags
Cite this document
(“Functional Behavior Assessment and Behavior Support Plan Essay”, n.d.)
Functional Behavior Assessment and Behavior Support Plan Essay. Retrieved from https://studentshare.org/education/1448983-functional-behavior-assessment-and-behavior
(Functional Behavior Assessment and Behavior Support Plan Essay)
Functional Behavior Assessment and Behavior Support Plan Essay. https://studentshare.org/education/1448983-functional-behavior-assessment-and-behavior.
“Functional Behavior Assessment and Behavior Support Plan Essay”, n.d. https://studentshare.org/education/1448983-functional-behavior-assessment-and-behavior.
Comments (0)
Click to create a comment or rate a document

...Please indicate Self Assessment: Conflict Management Style The assessment on conflict management that I took suggests that I am the type of person who tends to cooperate and work with people to achieve a desirable outcome. It suggests that when I am faced with a conflicting situation, although I listen and consider other viewpoints included in the discussion, I carefully evaluate and analyse every detail in accordance to my own. It depicts that I welcome other ideas or arguments but not easily swayed by them for I tend to make my point be heard and accepted as well, creating a really interesting discussion that in turn promotes a win-win situation. Furthermore, the assessment also indicated that second to collaborating attitude, I also...
7 Pages(1750 words)Essay
sponsored ads
Save Your Time for More Important Things
Let us write or edit the essay on your topic "Functional Behavior Assessment and Behavior Support Plan" with a personal 20% discount.
GRAB THE BEST PAPER

Let us find you another Essay on topic Functional Behavior Assessment and Behavior Support Plan for FREE!