Comments (0)
Add to wishlistDelete from wishlist
Cite this document
Summary
The article aims at providing growing evidence that PBS is a growing distinct discipline that needs to be separated from the applied behavior analysis. There is a fundamental need to evaluate the origin and features of PBS to the development and behavior correction in students…
Download full paperFile format: .doc, available for editing
HIDE THIS PAPERGRAB THE BEST PAPER96.3% of users find it useful 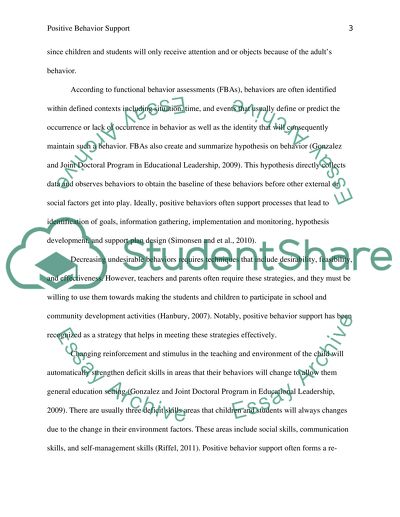 Download file to see previous pages The positive behavior support is an essential form of applied behavior analysis. The PBS often uses system towards understanding the principles that often maintains the changing human behaviors. The inappropriate behaviors of humanity are often difficult to change since they form the functional purpose of humanity. Human behaviors are often supported and reinforced by the environment upon which they exist (Klein, Cook, and Richardson-Gibbs, 2001). Therefore, in case of children and students, adults’ form the environment about which the child grows. Thus, the behaviors of the adult that will shape and reinforce the child or student’s desirable behaviors since children and students will only receive attention and or objects because of the adult’s behavior.
According to functional behavior assessments, behaviors are often identified within defined contexts including situation, time, and events that usually define or predict the occurrence or lack of occurrence of behavior as well as the identity that will consequently maintain such a behavior. FBAs also create and summarize hypothesis on behavior (Gonzalez and Joint Doctoral Program in Educational Leadership, 2009). This hypothesis directly collects data and observes behaviors to obtain the baseline of these behaviors before other external or social factors get into play. Ideally, positive behaviors often support processes that lead to identification of goals, information gathering, implementation and monitoring, hypothesis development, and support plan design. (Simonsen and et al., 2010).
Decreasing undesirable behaviors requires techniques that include desirability, feasibility, and effectiveness. However, teachers and parents often require these strategies, and they must be willing to use them towards making the students and children to participate in school and community development activities (Hanbury, 2007). Notably, positive behavior support has been recognized as a strategy that helps in meeting these strategies effectively.
Changing reinforcement and stimulus in the teaching and environment of the child will automatically strengthen deficit skills in areas that their behaviors will change to allow them general education setting (Gonzalez and Joint Doctoral Program in Educational Leadership, 2009). There are usually three deficit skills areas that children and students will always changes due to the change in their environment factors. These areas include social skills, communication skills, and self-management skills (Riffel, 2011). Positive behavior support often forms a re-directive therapy especially in line with parent child relationship. In most cases, when other treatments plans fail, the re-directive therapy is often allowed for positive interaction between children and parents as well as between teachers and teachers.
Origin and Development of Positive Behavior Support
The positive behavior support or the positive behavioral intervention and or support originated from quite controversial circumstances that were overseen as related to the individuals’ ...Download file to see next pagesRead More
Share:
Tags
Cite this document
(“Positive Behavior Support Research Paper Example | Topics and Well Written Essays - 2250 words”, n.d.)
Retrieved from https://studentshare.org/education/1462825-positive-behaviour-support

Under the balance of payment approach, the domestic cost of foreign currency is established like the cost of any other article of trade. In other words, the market demand and supply curvatures are intersected in the exchange market for that particular foreign currency. The modeling of the abovementioned approach related to the demand and supply for foreign exchange is quite...
13 Pages(3250 words)Term Paper

It is quite common in society to find a child abusive family, sibling abuse, dating abuse, parent abuse and even spouse abuse. Therefore, the question about violent behavior in the family can be difficult to answer. First, it would be quite important to identify what constitutes family violence. In as much as the definitional consensus might be achieved, the fact remains that acts of family violence mostly happen behind closed doors which means that the activities remain hidden sometimes, ignored or hidden. Violent behaviors among most families will mean poor upbringing of its members and in this case, the children in the family. The family remains an important source for the growth of the children in society therefore; whatever h...
7 Pages(1750 words)Assignment

... if they do not do anything about it. This is supported by Hooyman and Kiyak, who argue that most people who are broke and retired are unable to work even in menial jobs because of illness or a disability (497). Meaning of work Productivity in later years According to Hooyman and Kiyak, employers always look for ways to avoid giving administrative work or higher health insurance costs particularly when it comes to hiring older employees working on part-time basis (505). There is an improvement in the American educational credentials particularly those who are older. This improves their job market positions since the older employees tend to receive better compensation as compared to those who are younger. In organizations, most people...
8 Pages(2000 words)Assignment
sponsored ads
Save Your Time for More Important Things
Let us write or edit the research paper on your topic "Positive Behavior Support" with a personal 20% discount.
GRAB THE BEST PAPER

Let us find you another Research Paper on topic Positive Behavior Support for FREE!