Comments (0)
Add to wishlistDelete from wishlist
Cite this document
Summary
Blackberry limited Company, which was formerly known as Research in Motion (RIM), is a successful Canadian telecommunication and wireless equipment company. It is widely known worldwide as the developer of the blackberry brand of Smartphone and tablets. It is also greatly…
Download full paperFile format: .doc, available for editing
HIDE THIS PAPERGRAB THE BEST PAPER95.5% of users find it useful 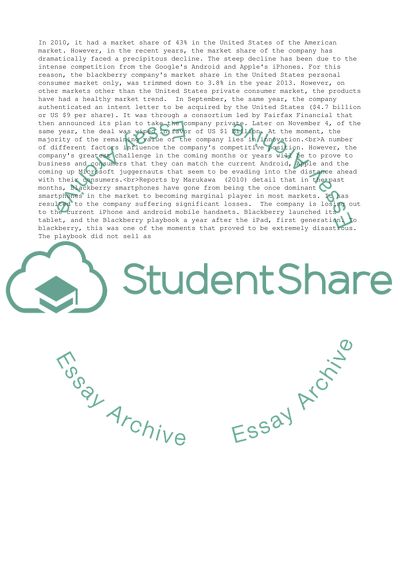 Download file to see previous pages In 2010, it had a market share of 43% in the United States of the American market. However, in the recent years, the market share of the company has dramatically faced a precipitous decline. The steep decline has been due to the intense competition from the Google’s Android and Apple’s iPhones. For this reason, the blackberry company’s market share in the United States personal consumer market only, was trimmed down to 3.8% in the year 2013. However, on other markets other than the United States private consumer market, the products have had a healthy market trend. In September, the same year, the company authenticated an intent letter to be acquired by the United States ($4.7 billion or US $9 per share). It was through a consortium led by Fairfax Financial that then announced its plan to take the company private. Later on November 4, of the same year, the deal was wiped in favor of US $1 billion. At the moment, the majority of the remaining value of the company lies in innovation.
A number of different factors influence the company’s competitive position. However, the company’s greatest challenge in the coming months or years will be to prove to business and consumers that they can match the current Android, Apple and the coming up Microsoft juggernauts that seem to be evading into the distance ahead with their consumers.
Reports by Marukawa (2010) detail that in the past months, Blackberry smartphones have gone from being the once dominant smartphones in the market to becoming marginal player in most markets. It has resulted to the company suffering significant losses. The company is losing out to the current iPhone and android mobile handsets. Blackberry launched its tablet, and the Blackberry playbook a year after the iPad, first generation. To blackberry, this was one of the moments that proved to be extremely disastrous. The playbook did not sell as ...Download file to see next pagesRead More
Share:
Tags
Cite this document
(“BlackBerry - Report Essay Example | Topics and Well Written Essays - 3500 words”, n.d.)
BlackBerry - Report Essay Example | Topics and Well Written Essays - 3500 words. Retrieved from https://studentshare.org/business/1670332-blackberry-report

CHECK THESE SAMPLES OF BlackBerry - Report

The European Renaissance: A Movement to Modernization

Compare Theories of Piaget,Vgotsky and Erikson

Theories of Motivation in Organization

The Dynamics of Teaching English as a Foreign Language

9 Pages(2250 words)Case Study
sponsored ads
Save Your Time for More Important Things
Let us write or edit the essay on your topic "BlackBerry - Report" with a personal 20% discount.
GRAB THE BEST PAPER

Let us find you another Essay on topic BlackBerry - Report for FREE!