Comments (0)
Add to wishlist Delete from wishlist
Cite this document
Summary
Introduction “The way South Africans communicate changed significantly in 1994” (Oxford Business Group, 2008 p115). This is attributed to the country's Apartheid system which kept the Black majority of the nation under strictly restricted conditions was abolished…
Download full paper File format: .doc, available for editing
HIDE THIS PAPERGRAB THE BEST PAPER91% of users find it useful 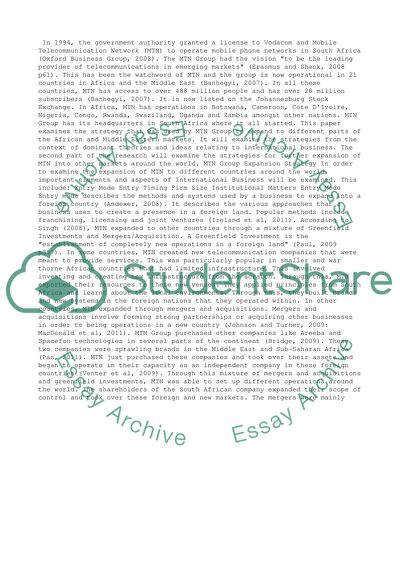 Download file to see previous pages In 1994, the government authority granted a license to Vodacom and Mobile Telecommunication Network (MTN) to operate mobile phone networks in South Africa (Oxford Business Group, 2008). The MTN Group had the vision “to be the leading provider of telecommunications in emerging markets” (Erasmus and Shenk, 2008 p61). This has been the watchword of MTN and the group is now operational in 21 countries in Africa and the Middle East (Banhegyi, 2007). In all these countries, MTN has access to over 488 million people and has over 28 million subscribers (Banhegyi, 2007). It is now listed on the Johannesburg Stock Exchange. In Africa, MTN has operations in Botswana, Cameroon, Cote D'Ivoire, Nigeria, Congo, Rwanda, Swaziland, Uganda and Zambia amongst other nations. MTN Group has its headquarters in South Africa where it all started. This paper examines the strategy that was used by MTN Group to expand to different parts of the African and Middle Eastern markets. It will examine the strategies from the context of dominant theories and ideas relating to international business. The second part of the research will examine the strategies for further expansion of MTN into other markets around the world. MTN Group Expansion Strategy In order to examine the expansion of MTN to different countries around the world, important elements and aspects of International Business will be examined. This include: Entry Mode Entry Timing Firm Size Institutional Matters Entry Mode Entry mode describes the methods and systems used by a business to expand into a foreign country (Andexer, 2008). It describes the various approaches that a business uses to create a presence in a foreign land. Popular methods include franchising, licensing and joint ventures (Ireland et al, 2011). According to Singh (2008), MTN expanded to other countries through a mixture of Greenfield Investments and Mergers/Acquisition. A Greenfield Investment is the “establishment of completely new operations in a foreign land” (Paul, 2009 p357). In some countries, MTN created new telecommunication companies that were meant to provide services. This was particularly popular in smaller and war thorne African countries that had limited infrastructure. This involved investing and creating new infrastructure from the scratch. Through this, MTN exported their resources to these new venues. They applied principles from South Africa and learnt about the local environments. Through this, they built brands and new systems in the foreign nations that they operated within. In other countries, MTN expanded through mergers and acquisitions. Mergers and acquisitions involve forming strong partnerships or acquiring other businesses in order to being operations in a new country (Johnson and Turner, 2009: MacDonald et al, 2011). MTN Group purchased other companies like Areeba and Spacefon technologies in several parts of the continent (Bridge, 2009). These two companies were sprawling brands in the Middle East and Sub-Saharan Africa (Pan, 2011). MTN just purchased these companies and took over their assets and began to operate in their capacity as an independent company in these foreign countries (Venter et al, 2009). Through this mixture of mergers and acquisitions and greenfield investments, MTN was able to set up different operations around the world. The shareholders of the South African company expanded their scope of control and took over these foreign and new markets. The mergers were mainly ...Download file to see next pages Read More
Share:
Tags
Cite this document
(“The strategy that was used by MTN Group to expand to different parts Essay”, n.d.)
Retrieved from https://studentshare.org/business/1402350-international-business

(The Strategy That Was Used by MTN Group to Expand to Different Parts Essay)
https://studentshare.org/business/1402350-international-business.

“The Strategy That Was Used by MTN Group to Expand to Different Parts Essay”, n.d. https://studentshare.org/business/1402350-international-business.
Comments (0)
Click to create a comment or rate a document

Born in 1945, August Wilson was raised in Pittsburg, Pennsylvania. He lived in a two-room apartment behind a grocery store on Bedford Avenue. At fifteen he quit high school, choosing to educate himself at the Carnegie Library. After working a bunch of assorted jobs, he began writing poems at twenty. Being raised in a time of segregation, then coming of age in the era of the Civil Rights Movements must have affected him deeply. Just from reading Ma Rainey’s Black Bottom, the reader can see the racial oppression Mr Wilson must have felt throughout his life being an African American male.
Ma Rainey’s Black Bottom opened on April 6, 1984, at the Yale Repertory Theater in New Haven, Connecticut. The cast included Richa...
9 Pages (2250 words) Coursework

Angelica (2004), on the contrary, says that nonprofit organizations are financially dependent on government grants and contributions from individuals and corporations. Through collaboration, nonprofit organizations are now becoming more business-like. Although they have the status of nonprofit that provides the most services at the least possible price (Shim & Siegel, 1997), they operate in a business-like manner as said by Nadder. But they still have some distinction from the for-profit ente...
13 Pages (3250 words) Literature review

In 1950, nearly eight percent of the total military force standing in Korea was comprised of African-American servicemen, equally approximately one hundred thousand individuals willing to fight and possibly die for their country. The country which finally gave these men this opportunity, at this time, was undergoing radical change at home and abroad in wartime. As African-Americans sought and acquired more social and economic freedom, and the consequent political power, military officials realized the underutilization of Black soldiers. As a result, the Korean War marks for the first time a major role granted to African-Americans to contribute in a significant fashion to the military endeavors of the United States.
That which...
7 Pages (1750 words) Essay

CAR is known to be one of the poorest nations in the African continent, apart from its frequent dependence on international donations in terms of food, clothing and medicinal supplies, CAR has also been a war zone for decades. The essay will relay more information on the various plights that children born in the Central African Republic go through while growing up.
Apart from most of the children being orphaned at a tender age due to maternal related problems or diseases such as HIV/AIDS, which is rampant in the nation, most of these children are victims of child trafficking, which is big business in the CAR (Lindborg). Lots of children from as little as 4 years normally go missing without a trace and the fact that the govern...
7 Pages (1750 words) Term Paper
sponsored ads
Save Your Time for More Important Things
Let us write or edit the essay on your topic "The strategy that was used by MTN Group to expand to different parts of the African and Middle Eastern markets" with a personal 20% discount.
GRAB THE BEST PAPER

Let us find you another Essay on topic The strategy that was used by MTN Group to expand to different parts of the African and Middle Eastern markets for FREE!