Comments (1)
Add to wishlist Delete from wishlist
Cite this document
Summary
An essay " Microsoft Corporation: Corporate Business and Strategy" shows whether their strategies will have any impact on the entire economy of U.S.A. along with the world. Microsoft has lots of strong competitions in the software market they have to be more conscious about their offerings…
Download full paper File format: .doc, available for editing
HIDE THIS PAPERGRAB THE BEST PAPER98.7% of users find it useful 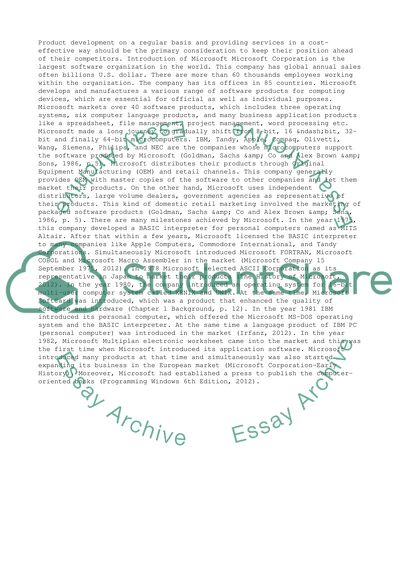 Download file to see previous pages Product development on a regular basis and providing services in a cost-effective way should be the primary consideration to keep their position ahead of their competitors. Introduction of Microsoft Microsoft Corporation is the largest software organization in the world. This company has global annual sales often billions U.S. dollar. There are more than 60 thousands employees working within the organization. The company has its offices in 85 countries. Microsoft develops and manufactures a various range of software products for computing devices, which are essential for official as well as individual purposes. Microsoft markets over 40 software products, which includes three operating systems, six computer language products, and many business application products like a spreadsheet, file management, project management, word processing etc. Microsoft made a long journey to gradually shift from 8-bit, 16 –bit, 32-bit and finally 64-bit microcomputers. IBM, Tandy, Apple, Compaq, Olivetti, Wang, Siemens, Philips, and NEC are the companies whose microcomputers support the software produced by Microsoft (Goldman, Sachs & Co and Alex Brown & Sons, 1986, p.5). Microsoft distributes their products through Original Equipment Manufacturing (OEM) and retail channels. This company generally provides OEM with master copies of the software to other companies and let them market their products. On the other hand, Microsoft uses independent distributors, large volume dealers, government agencies as representative of their products. This kind of domestic retail marketing involved the marketing of packaged software products (Goldman, Sachs & Co and Alex Brown & Sons, 1986, p. 5). There are many milestones achieved by Microsoft. In the year 1975, this company developed a BASIC interpreter for personal computers named as MITS Altair. After that within a few years, Microsoft licensed the BASIC interpreter to many companies like Apple Computers, Commodore International, and Tandy Corporations. Simultaneously Microsoft introduced Microsoft FORTRAN, Microsoft COBOL and Microsoft Macro Assembler in the market (Microsoft Company 15 September 1975, 2012). In 1978 Microsoft selected ASCII Corporation as its representative in Japan to market their products (The History of Microsoft, 2012). In the year 1980, the company introduced an operating system for 16-bit multi-user computer system called XENIX and UNIX. At the same time, Microsoft SoftCard was introduced, which was a product that enhanced the quality of software and hardware (Chapter 1 Background, p. 12). In the year 1981 IBM introduced its personal computer, which offered the Microsoft MS-DOS operating system and the BASIC interpreter. At the same time a language product of IBM PC (personal computer) was introduced in the market (Irfanz, 2012). In the year 1982, Microsoft Multiplan electronic worksheet came into the market and this was the first time when Microsoft introduced its application software. Microsoft introduced many products at that time and simultaneously was also started expanding its business in the European market (Microsoft Corporation-Early History). Moreover, Microsoft had established a press to publish the computer-oriented books (Programming Windows 6th Edition, 2012). ...Download file to see next pages Read More
Share:
Tags
Cite this document
(“Microsoft Corporation: Corporate Business and Strategy Essay”, n.d.)
Retrieved from https://studentshare.org/business/1399905-corporate-business-and-strategy

wi
wilson57 added comment 1 year ago
Student rated this paper as
At first, I thought 17 of pages is too much for such a subject. But now I see it could not be done smarter. As the author starts you see the depth of the question. I’ve read all at once. Wonderful document

CHECK THESE SAMPLES OF Microsoft Corporation: Corporate Business and Strategy

On the other hand, these globalization standards are opposed by some critics and argue that globalization does not have to be a requirement for putting up a business in other countries, thus it is just a choice for entering a foreign market. Accordingly, standardization is applicable specifically to high-end markets and with accord to the market segmentation such as the trends that the young people patronize (Mullman, 2006) Regardless of the idea that globalization is mostly based on how the company standardizes the products, the home country still holds the profitability of the business as the economy affects how the foreign investors and other national sources back up the business (Stiglitz, 2006).
Making the world flat mak...
9 Pages (2250 words) Assignment
sponsored ads
Save Your Time for More Important Things
Let us write or edit the essay on your topic "Microsoft Corporation: Corporate Business and Strategy" with a personal 20% discount.
GRAB THE BEST PAPER

Let us find you another Essay on topic Microsoft Corporation: Corporate Business and Strategy for FREE!