Comments (0)
Add to wishlistDelete from wishlist
Cite this document
Summary
During an emergency response, it is important that all available resources are utilized in the response to save lives and property. The department of defense has resources important for utilization in support for prevention, protection against as well as recovery from…
Download full paperFile format: .doc, available for editing
HIDE THIS PAPERGRAB THE BEST PAPER96.2% of users find it useful 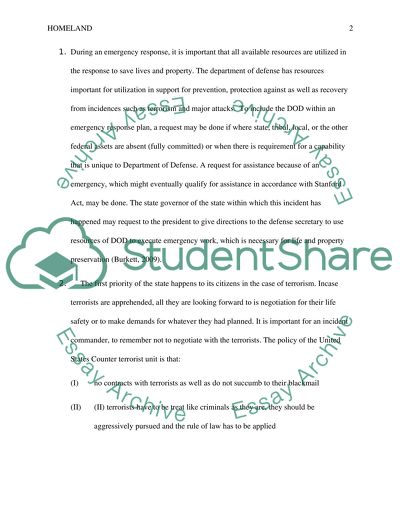 Homeland Affiliation During an emergency response, it is important that all available resources are utilized in the response to save lives and property. The department of defense has resources important for utilization in support for prevention, protection against as well as recovery from incidences such as terrorism and major attacks. To include the DOD within an emergency response plan, a request may be done if where state, tribal, local, or the other federal assets are absent (fully committed) or when there is requirement for a capability that is unique to Department of Defense. A request for assistance because of an emergency, which might eventually qualify for assistance in accordance with Stanford Act, may be done. The state governor of the state within which this incident has happened may request to the president to give directions to the defense secretary to use resources of DOD to execute emergency work, which is necessary for life and property preservation (Burkett, 2009).
2. The first priority of the state happens to its citizens in the case of terrorism. Incase terrorists are apprehended, all they are looking forward to is negotiation for their life safety or to make demands for whatever they had planned. It is important for an incident commander, to remember not to negotiate with the terrorists. The policy of the United States Counter terrorist unit is that:
(I) no contracts with terrorists as well as do not succumb to their blackmail
(II) (II) terrorists have to be treat like criminals as they are, they should be aggressively pursued and the rule of law has to be applied
(III) Maximum pressure has to be applied on sponsors of terrorism (Global Focus, 2015).
The government of United States makes no concessions with persons trying to kill or holding American citizens hostage. As an incident commander, one is the United States’ government representative and should do everything and utilize every appropriate resource available to secure the American citizens held hostage. It is the policy of the United States government to refuse hostage takers and terrorists benefits of ransom, policy changes, pioneer releases, as well as any other concession acts (Global Focus, 2015).
3. The department of defense happens to be within federal response to local occurrences while the response of the Department of Defense is coordinated totally through mechanisms that are listed within the National Response Framework. Within its provision for support during emergency responses, the command for Department of defense remains with the secretary of defense. However, the National Guard forces are under the governor’s control and command. Within NRF, nothing exists that hinders the statutory authority of the defense secretary as far as the resources as well as DOD personnel are concerned. Unity of command and command concepts has distinct meanings for military operations and military forces. For military forces who are deployed, command will run all the way from president to the defense secretary to combatant commander to DOD on-scene commander. This means that the incident commander is not in charge for deployment of DOD personnel to strategic positions (FEMA, 2008).
References
Burkett, J. (2009). Command and Control. Centre for Army Lessons Learnt, 6.
FEMA. ( 2008). Department of Defense Support to Domestic Incidents . Retrieved from fema.gov: https://www.fema.gov/pdf/emergency/nrf/DOD_SupportToDomesticIncidents.pdf
Global Focus. (2015). Counter-Terrorism. Retrieved from globalfocus.org: http://globalfocus.org/GF-Counterterrorism.htm Read More
Share:
Tags
Cite this document
(“Homeland Coursework Example | Topics and Well Written Essays - 500 words - 1”, n.d.)
Homeland Coursework Example | Topics and Well Written Essays - 500 words - 1. Retrieved from https://studentshare.org/social-science/1694230-homeland

CHECK THESE SAMPLES OF Homeland

... be created to develop a “comprehensive national strategy” to protect the country from any future terrorist attacks (Bullock, et al, 2009, pp.1-2). This paper focuses on the major components of homeland security and their functions since the September 11 attack. Homeland Security When George Bush became the president of America in January 2001, terrorism was not a matter of priority in his administrative agenda. His administration was busy coping with many other problems like scarcity of staff in programs of foreign translation, poor and inefficient information systems and cultural differences between various agencies resulting in disruption of sharing of information. In 2011, the FBI requested the government to increase funding...
8 Pages(2000 words)Research Paper

...and avoided so that no harm reaches the human population or property is not destroyed. This approach also requires that for hazards to be effectively managed, they should be assessed holistically so that resources can be allocated relative to the magnitude of the risk. Such is the approach the Department of Homeland Security has taken in its efforts to curb the terrorism threat so that the facilities that are most vulnerable, such as airports, receive the largest portion of resources to fight terrorism. Recognizing and Mitigating Disasters and Crises Despite the vast technology that enables experts to identify initial disasters and crises even before they occur, it is still not easy for authorities and organizations to...
10 Pages(2500 words)Assignment

... posed by terrorists" (Callahan, Dubnick, and Olshfski 555). The US had made few, if any, plans to deal with a terrorist arrack on US soil, and the discussion of terrorism was largely restricted to the law enforcement, investigators, and prosecutors that had confronted domestic terrorism such as the Unabomber and the attack on the Murrah Federal Building (Callahan, Dubnick, and Olshfski 555). The Congress took aggressive action and on October 4, 2001 introduced HR 3026 "To establish an Office of Homeland Security within the Executive Office of the President to lead, oversee, and coordinate a comprehensive national homeland security strategy to safeguard the Nation" (HR 3026). On November 25, 2002 George Bush signed into law PL 107-296...
6 Pages(1500 words)Essay

...nstitutes of various facts such as: the security services cannot stop all the terrorist attacks from taking place, the services have to create a strategy for both the longer run and the shorter run and the services should counter terrorist activities while balancing citizens interests, minimizing financial cost and making sure that citizens freedom is never at stake. Body Security services should devise plans that are fool proof and can prevent most of the attacks from taking place, this does not means that their plans can stop hundred percent of the attacks that are being planned and implemented. Even if the Homeland Security department cannot stop all the attacks, their measures are not necessarily ineffective. If at any particular...
2 Pages(500 words)Essay

... relates to the general framework which QHSR operates in general1. The second course, The Unconventional Threat to Homeland Security, how terrorism operate and how there organized in terms of the extremists behind them and the groups. How they are formed and the transnational nature of the people within the United States operating as individuals and groups. This people raise money and raise money to use and all motivators behind terrorism with all the political organizations who fund these terrorists. The QHSR examines terrorists who act alone in home soil and how Al-Qaeda, Hezbollah, and Al-Shabaab were formed. The funders of these organizations have been governments sympathizing with these terrorist organizations and the vision of QHSR...
4 Pages(1000 words)Essay

...of this formation is to deal with issues of the domestic population, building the necessary infrastructure to deal with both internal and the external aggressions and threats, sovereignty and the protection of the U.S territory. Inside the United States of America, the “Homeland Security” concept recombines and extends to the state agencies’ entities and responsibilities. The Homeland security research lays down the composition and formation of the Homeland Defense and the Homeland Security. These include the Transportation Security Administration, the Secret Service of the United States, United States Citizenship and Immigration Services, Americas Immigration and...
5 Pages(1250 words)Case Study

...HOME LAND SECURITY: AN ANALYSIS ON OSAMA BIN LADEN AND HOME MADE JIHADISTS of unit Osama bin Laden’s intended strategies in response to the “Arab Spring When the Arab spring sprout Osama bin Laden viewed the events as an opportunity to spread his ideology to the Muslim world. From his letter, several facts arise in relation to his intentions and strategies to the Muslim world. Osama viewed himself as a person with the role of guiding the Muslims not to settle for less solution that he referred to as half solutions1. Osama wanted to use the media to incite parts of the Muslim world so as to rise and rebel against their rulers whom he viewed as being oppressive and with western ideologies towards the people. Osama encouraged... LAND SECURITY: ...
2 Pages(500 words)Essay

...ngs, it is the best hope for protecting Americans from terrorists. Consequently, it is necessary to enhance its effectiveness and address the challenges that limit organizational efficiency. The Patriot Act The Patriot Act was passed in the aftermath of the September 11 attacks on the World Trade Center (The Department of Justice, 2015). The widespread support for this tool was demonstrated by the huge bipartisan support. The Senate passed it 98-1 while the House voted 357-66 to approve its passage (The Department of Justice, 2015). The Act gave the Department of Homeland Security new tools to detect and neutralize terrorism threats facing the country. The tool allowed the Department of Homeland security to enhance the effectiveness of...
7 Pages(1750 words)Essay
sponsored ads
Save Your Time for More Important Things
Let us write or edit the coursework on your topic "Homeland" with a personal 20% discount.
GRAB THE BEST PAPER

Let us find you another Coursework on topic Homeland for FREE!