Comments (0)
Add to wishlist Delete from wishlist
Cite this document
Summary
The Act passed through various objections in the two houses. The Senate was in favor of an individual mandate coupled with private insurance to provide a cover for…
Download full paper File format: .doc, available for editing
HIDE THIS PAPERGRAB THE BEST PAPER97.1% of users find it useful 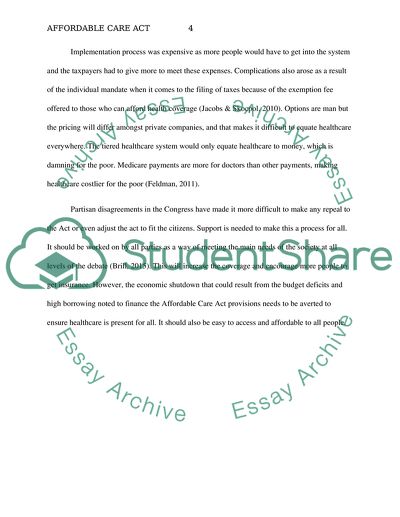 Extract of sample "Analysis of the Affordable Care Act"

Affordable Care Act PowerPoint Links http prezi.com/otq1sdl_oovr/?utm_campaign=share&utm_medium=copy https www.sendspace.com/file/997e86
Affordable Care Act
Affordable Care Act consists of different measures to provide an overview of the healthcare costs for all citizens. The Act passed through various objections in the two houses. The Senate was in favor of an individual mandate coupled with private insurance to provide a cover for the universal healthcare provisions. Concepts of universal healthcare dated back to 1989 (Barr, 2011). Republican and Conservative economists supported it then. Bill Clinton came up with a new way of dealing with the healthcare crisis in 1993 where employers would buy insurance on behalf of employees. Republicans, on the other hand, provided an alternative where employees would buy instead of employers. A stalemate arose and the bill did not pass. Obama introduced the bill again in 2009 and it stipulated a plan that would achieve the needed healthcare plan for the sake of meeting the main ideals of the organization. Universal care was one of the stated goals to assist in pushing the bill into an Act through the two houses (Barr, 2011).
Opposition to the bill was overwhelming from Republicans and protests were initiated to fight against its discussion. Voting, however, made the Democrats win by 60-39 vote thereby ending the debate on the bill in December 2009 (McDonough, 2011). Nonetheless, President Obama signed it into an Act on March 2010. Many termed it as the best overhaul of the healthcare system after Medicaid and Medicare (Jacobs & Skocpol, 2010). More people were insured and subsidies lowered costs by 76% for citizens who qualified for subsidies. Insurance companies now had more clients to cater for, but the law was on guard to protect them. More were eligible to Medicaid. The Act reduced the number of uninsured by 32 million, and only 23 million would be uninsured after 2019 (McDonough, 2011).
Implementation process was expensive as more people would have to get into the system and the taxpayers had to give more to meet these expenses. Complications also arose as a result of the individual mandate when it comes to the filing of taxes because of the exemption fee offered to those who can afford health coverage (Jacobs & Skocpol, 2010). Options are man but the pricing will differ amongst private companies, and that makes it difficult to equate healthcare everywhere. The tiered healthcare system would only equate healthcare to money, which is damning for the poor. Medicare payments are more for doctors than other payments, making healthcare costlier for the poor (Feldman, 2011).
Partisan disagreements in the Congress have made it more difficult to make any repeal to the Act or even adjust the act to fit the citizens. Support is needed to make this a process for all. It should be worked on by all parties as a way of meeting the main needs of the society at all levels of the debate (Brill, 2015). This will increase the coverage and encourage more people to get insurance. However, the economic shutdown that could result from the budget deficits and high borrowing noted to finance the Affordable Care Act provisions needs to be averted to ensure healthcare is present for all. It should also be easy to access and affordable to all people.
References
Barr, D. A. (2011). Introduction to U.S. health policy: the organization, financing, and delivery of health care in America. JHU Press.
Brill, S. (2015). Americas bitter pill: money, politics, back-room deals, and the fight to fix our broken healthcare system. Random House
Feldman, A. M. (2011). Understanding health care reform: bridging the gap between myth and reality. CRC Press.
Jacobs, L. R., & Skocpol, T. (2010). Health care reform and American politics. Oxford U.P.
McDonough , J.E. (2011). Inside national health reform. University of California Press. Read More
Share:
Tags
Cite this document
(“Analysis of the Affordable Care Act Essay Example | Topics and Well Written Essays - 500 words”, n.d.)
Retrieved from https://studentshare.org/social-science/1690430-analysis-of-the-affordable-care-act

CHECK THESE SAMPLES OF Analysis of the Affordable Care Act

Policy Analysis of the Patient Protection and Affordable Care Act

...?Running head: PATIENT PROTECTION AND AFFORDABLE CARE ACT Patient Protection and Affordable Care Act: Policy Analysis [Class] 20 August 2011 Abstract Problems in the health care system have long been a matter of public concern in the U.S. Overspending, low efficiency and low insurance coverage have become the main policy priorities in the U.S. The provisions of the Patient Protection and Affordable Care Act hold a promise to improve the health care situation in the United States. In this paper the new policy and its implications for health care provision are analyzed. The main purpose of the given work is to analyze the benefits and drawbacks of the new policy and provide recommendations for improvement. The Patient Protection...
5 Pages (1250 words) Essay

...?Policy Analysis: The Patient Protection and Affordable Care Act Health insurance is a major health issue in the US, as the nation’s fragmented health care system depends largely on voluntary health insurance, obtained primarily through employers and government funded programs (Medicare, Medicaid, and the State Children’s Health Insurance Program) that act as medical safety net for the poor, elderly, disabled and some of those uninsured (Mills & Ranson, 2005, p. 548). As such, the Patient Protection and Affordable Care Act or Obamacare, had gone through the hole of the needle before it had been passed into law on March 23, 2010. But despite its enactment, Obamacare has remained controversial and continued to be criticized and opposed (York...
5 Pages (1250 words) Research Paper

...? Policy Analysis of the Patient Protection and Affordable Care Act (ACA) The Patient Protection and Affordable Care Act (ACA), is argued to be the most comprehensive reform of the medical system that US have had since the last 45 years. The Act has transformed non-group insurance market in US by making it mandatory for residents of US to have health insurance. The Act also requires that families and individuals who fail to obtain health insurance coverage be subjected to penalties by the US government at the start of 2014 (Maggied & Schenker, 2010). Due to these restrictions, it is expected that more than 32 million US citizens who are not currently insured would have the opportunity to be covered under ACA. In addition, under ACA, 24...
8 Pages (2000 words) Essay

... College: Affordable Care Act Attempts to restructure the health care system to necessitate accessibility and affordability of health care services through enactment of all inclusive policies in the United States date back to the early 20th century1. During president Theodore Rosevelt’s term, the progressive party tried to initiate a national health insurance program unsuccessfully. The Medicare and Medicaid programs were enacted under, president Johnsons administration, in 1965. Medicare provides health care services for people above the age of 65 years, those with disabilities and those suffering from terminal illness2. On the other hand, Medicaid is funded by the state government to necessitate the provision of medical services to low...
8 Pages (2000 words) Essay

... of different healthcare professionals; public health practitioners, community health workers, doctors, nurses, allied workers and those practicing medicine in the provision of health care to the economy (Gronvall, p12). The Affordable Care for America Act bill of the United States, was passed in November, 2009.The bill was meant to improve the health standards of the United States citizen through provision of advanced health incentives to harmoniously favor all the citizens. It was meant to incorporate new measures to inclusively involve each and every stakeholder in the provision of advanced, well mitigated, planned and output/ result oriented healthcare system unlike the one that existed. Despite its aims and target, the bill was faced...
4 Pages (1000 words) Essay

... Task The Quantitative Analysis of Affordable Care Act Review of the Literature The debate on affordable care act in the United States rages on even after the president passed into law the ObamaCare Health Policy. Most supporters of this policy commend it for considering the low-income earners within the society as the policy enables them to access the essential insurance necessary to safeguard their health. On the other hand, the critics of this health care policy argue that it will be too costly for the government to bear, and May lead to a bloated federal debt, as well as, to a higher taxation system against the rich and affluent in America, which in turn may jeopardize the economic status of the country. The policy denies the rich...
5 Pages (1250 words) Essay

In the past decades, many Americans remained uninsured due to the expensive nature of insurance, and largely due to the poor and unfair code of conduct of many insurance companies. For example, the insurance companies could withdraw or rescind a person’s coverage just because they are suffering from heart diseases, diabetes or other long term chronic illnesses (Fernandez-Kelly and Portes 54). The companies also discriminated against the children, denying a majority of them the coverage they were warranted. Young unemployed adults also had a rough time as the companies sidelined them and denied them insurance. However, the Affordable Care Act has made things better and more affordable for people (Dolgin and Dieterich 46).
It is...
10 Pages (2500 words) Research Paper

...﻿Affordable care act Introduction Affordable care act was passed in the year 2010. The act put in place an inclusive health insurance reforms which were to be rolled out within four years. The affordable care had a number of provisions that were geared towards improving the healthcare of the people. Some of the issues it addressed includes high cost of health insurance. In short, affordable Care Act is an extremely complex section of the legislation that was rushed to Congress and became a law. This act was faced with many challenges that made it difficult to live up to the expectations. However, its roll out from October 1st 2013 has been so far successful. Below are the major problems that made it unsuccessful, solutions that were...
2 Pages (500 words) Assignment
sponsored ads
Save Your Time for More Important Things
Let us write or edit the essay on your topic "Analysis of the Affordable Care Act" with a personal 20% discount.
GRAB THE BEST PAPER

Let us find you another Essay on topic Analysis of the Affordable Care Act for FREE!