Comments (0)
Add to wishlistDelete from wishlist
Cite this document
Summary
This is because the split is between two organized Islam groups who differ in several elements of their ethno-religious elements1. The Sunni Arabs were considered to reap better benefits during the Sadam regime as…
Download full paperFile format: .doc, available for editing
HIDE THIS PAPERGRAB THE BEST PAPER95.6% of users find it useful 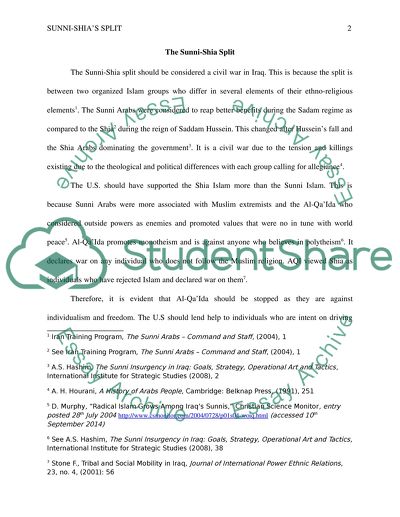 The Sunni-Shia Split The Sunni-Shia Split The Sunni-Shia split should be considered a civil war in Iraq. This is because the split is between two organized Islam groups who differ in several elements of their ethno-religious elements1. The Sunni Arabs were considered to reap better benefits during the Sadam regime as compared to the Shia2 during the reign of Saddam Hussein. This changed after Hussein’s fall and the Shia Arabs dominating the government3. It is a civil war due to the tension and killings existing due to the theological and political differences with each group calling for allegiance4.
The U.S. should have supported the Shia Islam more than the Sunni Islam. This is because Sunni Arabs were more associated with Muslim extremists and the Al-Qa’Ida who considered outside powers as enemies and promoted values that were no in tune with world peace5. Al-Qa’Ida promotes monotheism and is against anyone who believes in polytheism6. It declares war on any individual who does not follow the Muslim religion. AQI viewed Shia as individuals who have rejected Islam and declared war on them7.
Therefore, it is evident that Al-Qa’Ida should be stopped as they are against individualism and freedom. The U.S should lend help to individuals who are intent on driving AQI out as seen in the case of Amariyah whose new boss rebelled against AQI8. The Baath party was favored the Sunnis and ensured they took up positions of wealth and power9. The Shia Arabs are seen to be oppressed from several angles and would be the ones who would call for help as they do not promote values going against human right and freedom. The reign of Baath party saw that that the Shia did not enjoy higher living standards, prestigious education and jobs as the Sunni10.
References
Iran Training Program. The Sunni Arabs- Command and Staff. 2004.
Hashim, A. (2008). The Sunni Insurgency in Iraq: Goals, Strategy, Operational Art and Tactics. Available Online
https://www.iiss.org//media/Adelphi%20TOCs/2008/TOC%20Iraqs%20Sunni%20Insurgency.pdf
Hourani, A. H. (1991). A History of the Arab Peoples, Cambridge: Belknap Press, 1991, p.251.
Murphy, D. (2004). Radical Islam Grows Among Iraq’s Sunnis. Christian Science Monitor, 28th July 2004, Pp. 1. Retrieved Online http://www.csmonitor.com/2004/0728/p01s04-woiq.html
Stone, F. (2001). Tribe and Social Mobility in Iraq. Journal of International Ethnic Power Relations. Vol. 23, No. 4, Pp. 55-60
Sly, L. (2007). New Boss Turns the Tables on Al Qaeda Ex-Sunni Insurgent becomes U.S. Ally. Chicago Tribune, 22nd November 2007. Retrived Online www.chicagotribune.com/news/nationworld/chi-abulnov22,0,7873684.story?coll=c
Sadaqt, A. (1999). Tribal Conflict and Consensus in Saddam’s Iraq. The Havard MENA Report, Spring 1999. Vol. 3, Mo. 17, Pp. 63-79.
Baram, A. (1997). Neo-Tribalism in Iraq: Saddam Husayn’s Tribal Policies, 1991-1995. International Journal of Middle East Studies, 29th February, P.131. Read More
Share:
Tags
Cite this document
(“Sunni-Shia Split Essay Example | Topics and Well Written Essays - 250 words”, n.d.)
Sunni-Shia Split Essay Example | Topics and Well Written Essays - 250 words. Retrieved from https://studentshare.org/social-science/1656850-sunni-shia-split

CHECK THESE SAMPLES OF Sunni-Shia Split

... in that specific parts of the brain are responsible for different tasks in ability and processing. Even though all of these different parts of the brain operate differently in processing and storage of a particular stimulus, they still communicate with one another in effort to process and integrate sensations more efficiently and more fully. One of the biggest divisions in the brain’s structure is the right and left hemisphere. Each is responsible for its own processing of data and they have to communicate with each other in order to understand the whole picture. As a result of this, a great deal of research has been devoted into split-brain studies in trying to figure out how the two hemispheres work in tandem as well as how they work...
5 Pages(1250 words)Research Paper

...? Split Brain xxxxx School: xxxxx xxxxx xxxxx Introduction: The brain is divided into two parts, the right and left hemispheres. Both of these hemispheres look like a mirror image of one and other. However, it has been validated that the left one is always bigger than the right one. This anatomical difference is because of the different functions these two spheres perform. The left hemisphere is used for language; where as the right side is specifically used for mental imagery as well as understanding the spatial relationships. Use of sound and speech are mostly located in the left hemisphere. However, in some of the left-handed people, the speech centres location is the right hemisphere or they are divided between the two (Hochman, 2002...
4 Pages(1000 words)Term Paper

..., and Iraq, where Shiites form a less prominent majority (Esposito 1998, ch.5). Let us concentrate on the exploration of the differences between Shia and Sunni denominations, including the initial divide between them, with the aim to obtain a better understanding of the less numerous Shia group. In order to comprehend the roots of the differences between Shia and Sunni denominations of Islam, it is necessary to go back in history up to the time immediately following the death of Prophet Mohammed, after which tensions arouse as to who would inherit the right of authority (Armstrong 2002, pp.45-49). The main figure in the imminent split between Sunni and Shia was Ali, a cousin of Mohammed, his daughters Fatima husband, and the father...
8 Pages(2000 words)Essay

...Over the past two years, both the media and politicians have highlighted the differences between Sunni Islam and Shia Islam and conflicts between Shia and Sunni Muslims. As a Shi'ite Muslim, I had never given the question much thought and, indeed, in my gatherings with other Muslims, some of whom are Sunni, never really noticed a difference. However, given that there are differences and conflicts, I decided to visit a Sunni Mosque in Los Angeles and see for myself whether there was, indeed, a difference in worship rituals. On Friday 8th December, I visited Masjid Omar ibn Al-Khattab, located on Exposition Boulevard in Los Angeles. I had been told by my Sunni acquaintances that this was the oldest and the grandest Muslim Sunni Mosque...
2 Pages(500 words)Essay

... Section a. What do you think this article got right about the topic? This article covers the theory of half-brain and how effective it is to use only a part of the brain (Nigel). One of the things that the article got right about the topic was that people use one half of their brains more than they use the other. This is true since research has shown that most people only develop the use of one part of their brains while the other half is left unexploited. The article is also right in stating that split brain surgery is normally done to control violent seizures. Only the part of the brain where the seizure is coming from is normally removed during surgery, making it possible for people who had suffered from seizures to get healed. After...
2 Pages(500 words)Essay

...Running Head: SHIITE AND SUNNI MUSLIMS Inserts His/Her Inserts Grade Inserts Shiite and Sunni Muslims Before the arrival of Islam, many religions dominated the human world, and people followed them according to their own opinions and beliefs. However, with the advent of Islam, one religion for the entire humanity was developed, and followed. Later, Islam too, started being divided into various sects. Amongst many of the factions of Islam, the Sunnis and Shiite are two major and most prominent sects to be dominating the Muslim world these days. This paper shall discuss the origin, development, concepts, similarities and differences between both the sects. Islam Islam is articulated by the divine book, Holy Quran, and is a monotheistic...
4 Pages(1000 words)Research Paper

... and Sur and Sur Number the paper Differences between Shia political Islam and its Sunni counterpart intheoretical and practical dimensions Traditionally, Muslim communities are divided on several groups, with Sunni and Shia as the prominent minorities among them. Even though it is a religious difference, it also has a key role for social relations. By being different branches within theoretic Islam, political features of Shia and Sunni turn to be practically important for the existence of Islamic states. In fact, different rulers of Muslim countries clearly articulate their religious views and use certain kind of understanding the Quran while governing the country. In other words, each new leader is clearly sympathetic to either Shia...
4 Pages(1000 words)Essay

Let us find you another Essay on topic Sunni-Shia Split for FREE!