Comments (0)
Add to wishlistDelete from wishlist
Cite this document
Summary
The successful Arab revolt that occurred in African countries such as Egypt, Tunisia and Libya contributed to the 2011 uprising that has turned into a civil war in Syria. Citizens in different parts of the country took to the street to demonstrate against the government of Al…
Download full paperFile format: .doc, available for editing
HIDE THIS PAPERGRAB THE BEST PAPER92.8% of users find it useful 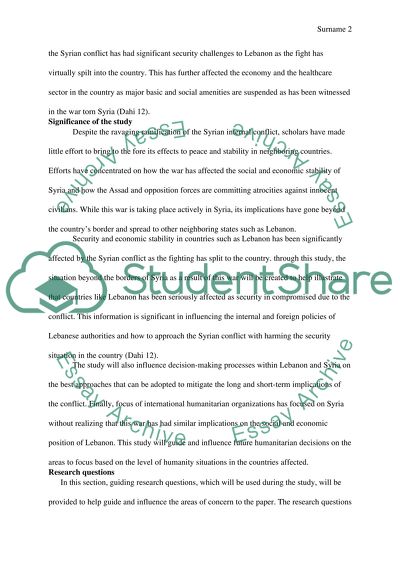 Download file to see previous pages The armed opposition is an alliance of various groups, which were formed during the conflict to protect the civilian protestors and face off the government forces. This civil conflict has however progressed to become a regional problem, affecting other countries that have remained neutral to the domestic issues that are facing the country. As opposed to being an effort to eliminate Assad leadership in Syria, the conflict has graduated into a sectarian conflict, leading to emergence of Alawite government forces and pro-government militias made up of members of the Shia tribe (White 16).
The opposition is dominated by members of the Sunni tribe, a situation that has led to an increase in foreign interference in the course of the war. For example, in 2013, the Hezbollah terrorist group joined the civil war to fight alongside government forces and defeat the Sunni dominated opposition forces. As the war progresses, its impacts have been felt beyond the borders of Syria, spilling to neighboring countries, which are currently, faced with major insecurity challenges.
Lebanon, a country with the longest borderline with Syria is considered as one of the few neighboring countries that have significantly been affected by the civil war. As a result, the Syrian conflict has had significant security challenges to Lebanon as the fight has virtually spilt into the country. This has further affected the economy and the healthcare sector in the country as major basic and social amenities are suspended as has been witnessed in the war torn Syria (Dahi 12).
Despite the ravaging ramification of the Syrian internal conflict, scholars have made little effort to bring to the fore its effects to peace and stability in neighboring countries. Efforts have concentrated on how the war has affected the social and economic stability of Syria and how the Assad and opposition ...Download file to see next pagesRead More
Share:
Tags
Cite this document
(“The war in syria and its consequences on lebanon Research Paper - 1”, n.d.)
The war in syria and its consequences on lebanon Research Paper - 1. Retrieved from https://studentshare.org/social-science/1679341-the-war-in-syria-and-its-consequences-on-lebanon

“The War in Syria and Its Consequences on Lebanon Research Paper - 1”, n.d. https://studentshare.org/social-science/1679341-the-war-in-syria-and-its-consequences-on-lebanon.
Comments (0)
Click to create a comment or rate a document

...Annotated Bibliography Barakat, H. (1988) Toward a viable Lebanon. Washington, DC: Center for Contemporary Arab Studies, Georgetown Barakat adopts a sociological analysis of Lebanon's ethnic and religious composition for the purposes of investigating whether or not unification is possible. While he highlights the fact that Lebanon is comprised of multiple religious sects, he does not believe that religion divides Lebanon. Instead, divisions are a consequence of blood ties and loyalties. The Lebanese give their allegiance to their blood ties and define themselves in terms of familial affiliation. As such, there is, for example, no unity among the Druze or the Maronites but divisions within these religious sects dependant upon blood...
4 Pages(1000 words)Annotated Bibliography

...﻿The Second Lebanon War During the Second Lebanon War between Hezbollah military and Israel forces, there was widespread damage to civilian infrastructure, including to the main airport of Beirut. War causalities also included killing of innocent civilians. The war was started by Hezbollah militants, who had fired rockets at Israel border as a diversionary technique to attack patrolling Israel soldiers. The media had lapped up the war that had generated mass reaction all through the world. A freelance Lebanese photo-journalist had taken photos of the war torn civilian outputs. The photos had generated mass hysteria against the Israel attacks which had damaged civilian places and displaced millions of the people from their home. Reuter...
2 Pages(500 words)Assignment

Nihilism And Its Consequences

... August 11, Nihilism: No Consequences, Meaning, and Openness Nihilism can kill people “inside” or “completely,” according to two short stories. In Hurstons “Spunk,” Spunk is a giant and armed African-American, who takes what he wants, because he knows he can. Braverman describes the vast emptiness in a white, alcoholic, upper-class, middle-age womans life in the “Tall Tales from the Mekong Delta.” This paper compares and contrasts how Hurston and Braverman use imagery, symbols, writing style, and characterization to explore the nature and outcomes of nihilism. Spunk and the alcoholic woman are nihilistic, because they do not think about the consequences of their actions, they live in closed societies, and they find life meaningless, though...
6 Pages(1500 words)Essay

The Civil War in Syria

... The Civil War in Syria Syria is currently embroiled in its worst civil war yet. The Syrian civil war has rebels who enjoy the backing of the greater Syrian population and the international community on one hand, against the President Bashar al-Asad regime that enjoys the backing of the military and allies such as Iran. Syria’s current status has been blamed on the fight for control of the state, characterized by the awakening of the Syrian population who became tired of President Assad’s autocratic rule. It all started after the Arab spring, a term used to express the recent widespread defiance against Middle East dictatorships, which included Egypt, Libya, Tunisia, Lebanon and Jordan. Syria later on caught up with their Middle East...
2 Pages(500 words)Assignment

The reasons of civil war in Lebanon The causes of civil war in Lebanon have traditional character as the war was caused by different attitude of different groups of population towards the events, which happened in the country, as well as different interests of the groups and religious conflict.
Arab and Israeli conflict caused the problem of Palestine refugees, the armed forces of which tried to conquer their lands. Having suffered the failure from the army of Israel, the groups of Palestinian opposition entered the territory of Jordan. Palestinians tried to occupy the power in Jordan, but also failed and had to leave Jordan for Lebanon.
The aggravation of Arab-Israeli conflict after Six-day war (1967) and the proscription o...
2 Pages(500 words)PowerPoint Presentation

..., 2). Syrian war is a prolonged conflict that is currently taking place in Syria between the military and those opposed to the regime of Baa’thist government led by Bashar al-Assad. It started during the Arab spring. Syrian Arab republic was established in 1920 as a French colony in Western Asia. It has its headquarters in Damascus. The country borders Israel, Turkey, Lebanon, Iraq and the Mediterranean Sea. At the time of the Arab spring Syrian president Bashar al Assad enjoyed a relatively good support from the citizens. Bashar al Assad took the reign of power from his father, Hafez al- Assad in 2000 when the father died. Hafez became president in 1970 through a coup de tat. After taking power, Hafez set up an authoritarian regime...
6 Pages(1500 words)Essay

The war in syria and its consequences on lebanon

... in the year 2012 all over Lebanon. Lebanon has experienced increased rates of political polarization owing to the fact that Syria has the same ethnic composition like that of Lebanon. Aspect 3: economic pressure on the already constrained Lebanon economy from 2012 in the northern part of Lebanon. Economic pressure has mounted on the Lebanon government following the large number of refuges form Syria who now make up of ten percent of the countrys population. Outline of the research paper The war in Syria and its consequences on Lebanon 1.0 Introduction a) Background information The part will involve a brief information on the war in Syria siting its effects and causes. At the same time, the section will shade light on the role of Lebanon...
5 Pages(1250 words)Research Paper

Lebanon Culture Lebanon culture is a composition of various civilizations culture. Lebanese culture has evolved over years and borrowed cultural practices and belief from different communities like Assyrians, Greek, Persians, Arabs, Romans, French, Crusaders and Ottoman Turks. The diverse population of Lebanon is composed of different religious and ethnic groups that have contributed to the music styles, literature, cuisine and festivals in the country. Lebanese have different ethnic, religious and linguistic practices but they share common culture. The official’s language spoken is French and Lebanese is spoken in public (Harris 45).
Lebanon History
Early settlement in Lebanon evidence was found in Byblos. In 5000 BC the...
1 Pages(250 words)Essay

The Civil War in Syria

RHETORICAL PLAN FOR PROJECT NUMBER FOUR By The current issue or trend to write about is on revolution in Syria that would help bring peace and reduces the mass casualties of innocent citizens due to increased civil war.
The audience for my commentary includes but not limited to the course instructor, the students, peer counselors, the institution management team and other nations involved in civil war at large.
The persona as a commentator
1. Open minded
2. Concise
3. Eloquent
Thesis
Civil War is the most aggressive and biggest military conflict of today’s world. Great efforts have been made to completely burry it into forgettable history. However, this has been like mission impossible worldwide with...
1 Pages(250 words)Coursework

Deviance and Its Consequences

Let us find you another Research Paper on topic The war in syria and its consequences on lebanon for FREE!