Comments (0)
Add to wishlistDelete from wishlist
Cite this document
Summary
The antagonist that exist between civil liberty and intelligence community has had devastating consequences in the terror attack on World Trade Centre in September 2001. The intelligence community failed to protect the people against the terror attack because it faced so many…
Download full paperFile format: .doc, available for editing
HIDE THIS PAPERGRAB THE BEST PAPER91.3% of users find it useful 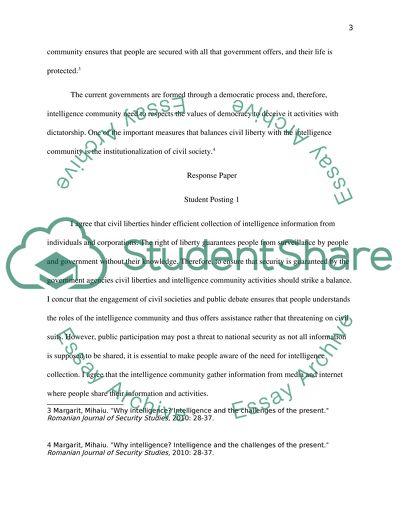 CHECK THESE SAMPLES OF Intelligence Challenges in Homeland Security

...and manuals on guidance for homeland security with extra focus on bioterrorism (Gottron & Shea, 2010, p.4). The department of homeland security embodies multiple government departments and effectively manages its challenges. National Cybersecurity Initiative One of the most important concerns for the Bush administration was the nationwide cyber security. Cyber networks became a primary area of attack for the terrorists which resulted in unlawful access to the secret information and strategies of the Federal agencies. Electronic system of storing information had become the major support for securing a wide variety of...
8 Pages(2000 words)Research Paper

...?Running head: homeland security 30th December Introduction Based on the increased security challenges in the world, there is need for countries to put in place effective security measures to curb terrorism and other forms of incidents that jeopardize the world economy. The US government through Homeland Security has adopted a number of security measures an aspect that has made the country to effectively protect its investment and people. Apart from using skilled and experienced security personnel, the US government heavily relies on modern technology and effective communication system to...
5 Pages(1250 words)Essay

...the terrorist attacks on America. President George Bush established the agency so that there would be no more terrorist attacks on America. It can be said that The US Department of Homeland Security came into being in the wake of the 9/11 terrorists to keep America safe from natural and man-made disasters. The aim of this department was to undertake counter-terrorism measures, and in the event of an attack coordinate rescue and recovery actions. The mission statement of this agency is to prevent terrorist attacks and to keep the damages to a minimum and recover from attacks when they do occur. To address these challenges states have to do two things: 1) secure their...
4 Pages(1000 words)Research Paper

.... Others are several breaches that have resulted to critical data such as financial information, sharing of information across different sectors and coordination, infrastructure protection that is critical, Federal Information Security Management Act reformation (FISMA and the government’s role together with the national strategy. Stakeholders have fronted various changes in a number of areas. Despite the fact that there are many bills regarding cyber security that have gotten floor or committee action, none of these has been enacted into law. There has been a view that their enactment will be attempted again in the 113th Congress. References Berman, J., & Flint, L. (2003). Guiding lights:...
5 Pages(1250 words)Case Study

The Capabilities And Limitations Of Intelligence In Supporting Homeland Security

...broadened to include all-hazard focus. If DHS continues to become an all-hazard organization, the nation may face challenges in prioritizing information sharing and gathering intelligence to prevent terrorism. In 2009, Secretary Napolitano announces the realignment of I&A to strengthen information sharing and the delivery of useful and actionable intelligence products. Specifically, the Secretary outlines before Congress a strategy to create Joint Fusion Center Program Management Office with I&A to enhance coordination across all DHS components toward strengthening DHS intelligence products. Paper 2: Review the capability of the homeland...
3 Pages(750 words)Essay

...shortcomings, it is the best hope for protecting Americans from terrorists. Consequently, it is necessary to enhance its effectiveness and address the challenges that limit organizational efficiency. The Patriot Act The Patriot Act was passed in the aftermath of the September 11 attacks on the World Trade Center (The Department of Justice, 2015). The widespread support for this tool was demonstrated by the huge bipartisan support. The Senate passed it 98-1 while the House voted 357-66 to approve its passage (The Department of Justice, 2015). The Act gave the Department of Homeland Security new tools to detect and neutralize terrorism threats facing the country. The tool allowed the...
7 Pages(1750 words)Essay
sponsored ads
Save Your Time for More Important Things
Let us write or edit the essay on your topic "Intelligence Challenges in Homeland Security" with a personal 20% discount.
GRAB THE BEST PAPER

Let us find you another Essay on topic Intelligence Challenges in Homeland Security for FREE!