Comments (0)
Add to wishlistDelete from wishlist
Cite this document
Summary
In the paper “Child Abuse with Adopted Children” the author analyzes the extent of child abuse, as a social issue. He shows that child abuse exists in at least a small percentage of adopted families. In this backdrop, he proposes some remedial mechanisms…
Download full paperFile format: .doc, available for editing
HIDE THIS PAPERGRAB THE BEST PAPER96.3% of users find it useful 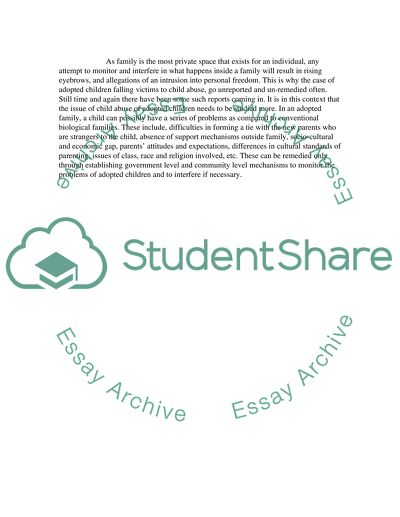 Child Abuse with Adopted Children Educational Outline I Intro Though the extent of child abuse suffered byadopted children has not yet been quantified as a social issue, many studies and personal narratives have shown that child abuse exists in at least a small percentage of adopted families. In this backdrop, further studies need to be done and remedial mechanisms be strengthened.
II School Effects
Miller et al. 2007 There is an increase in the number of
transnational adoptions. 67 percent of the dead
(adopted) children were below the age of seven
and hence their death could not be attributed to
some behavioral problems of their own.
Curtis and Denby 2004 Child Abuse and Prevention Treatment Act
(1974) has brought in, a qualitative difference.
Reading 2011 possibility of child sexual abuse is double in the
case of children who are “not brought up with
both biological parents.
III Emotional Effects
Vostanis 2010 Adopted children are included in the ‘vulnerable
Children’ category
Golding 2011 Adopted children have special mental needs but
have no mental health support mechanism
Purvis, Cross and Pennings 2011 behavioral problems are more found in adopted
children than in children living with biological parents
Cahn 2002 adoption fulfils some adult needs also like finding
laborers for the family, and finding the perfect family.
There are class, race and religious feelings involved.
IV History Effects
Weir 2011 2009 controversy on a Tennessee mother sending back
her adopted child rudely.
Bonnet 2011 Adoptive father sexually abusing girl child.
Miller et al. 2007 Death of 18 adopted children in the US.
V Summary

As family is the most private space that exists for an individual, any attempt to monitor and interfere in what happens inside a family will result in rising eyebrows, and allegations of an intrusion into personal freedom. This is why the case of adopted children falling victims to child abuse, go unreported and un-remedied often. Still time and again there have been some such reports coming in. It is in this context that the issue of child abuse of adopted children needs to be studied more. In an adopted family, a child can possibly have a series of problems as compared to conventional biological families. These include, difficulties in forming a tie with the new parents who are strangers to the child, absence of support mechanisms outside family, socio-cultural and economic gap, parents’ attitudes and expectations, differences in cultural standards of parenting, issues of class, race and religion involved, etc. These can be remedied only through establishing government level and community level mechanisms to monitor the problems of adopted children and to interfere if necessary. Read More
Share:
Tags
Cite this document
(“Child Abuse with Adopted children Essay Example | Topics and Well Written Essays - 250 words”, n.d.)
Retrieved from https://studentshare.org/social-science/1417367-child-abuse-with-adopted-children

CHECK THESE SAMPLES OF Child Abuse with Adopted children

...? Child Abuse Fatemah Al Khalifah Research paper Dean Michael Lynn 11 12/ 11 The purpose of this research is to know what the definition of child abuse is and what are the kinds of abuse. Some parents use abuse at home with their children and home must be a safe place for children to live. Some of factors that make parents use violent with their children are alcohol, drugs, smoke, and other problems at home. In addition, there are violent from teachers at school, and they use different methods of abuse with students such as a spanking, shaking, pulling a...
8 Pages(2000 words)Essay

...? A Case Presentation on Physical Child Abuse and Related Nursing Management First Last Touro Nevada School Of Nursing Children, as part of the vulnerable group, are repeatedly subjected to physical cruelty, resulting to a variety of physiopsychologic damages that are oftentimes irreversible. Surprisingly, the act of physical abuse to helpless young children is allegedly traced to incriminating circumstances surrounding the socioeconomic and personal coping capabilities of most parents. In the case study, the paper aims at exploring the various nursing mechanisms employed in detecting and managing cases of physical abuse in...
6 Pages(1500 words)Essay

.... (Larry, 64) Child abuse has proved to have very long term effects on the society, children who are subjected to this blight tend to maintain the same attitude on their future generations especially their own kids. This way a cycle is developed which takes conscious and intended efforts to break in the years to come. (Mary, 250) Secondly individuals who once get into the habit of abusing do not hesitate from extending this practice towards other members of the family thus further strengthening this trend in the society. (Cindy, 312) Children who are abused are driven to extreme attitudes; either they become too indifferent towards love...
1 Pages(250 words)Research Paper

...?Child Abuse Child abuse and its severe consequences have adversely affected the growth of young generation. In the United s, the rate of child abuse has witnessed a gradual increase in recent years. Maltreatments towards children are many and varied and these have social, personal, educational, physical and mental impacts among the children. Physical abuse, emotional neglect, sexual abuse, and other maltreatments contribute problems in child’s physical, mental and social development. The proposed research is indented to analyze child...
9 Pages(2250 words)Research Paper

...? Child Abuse: Solutions from Empirical Research of of This paper examines the concept of child abuse in modern societies. It examines the empirical research of four major authorities of this branch of the social sciences. The paper looks at Kobin's analysis of the relationship between child abuse and anthropology. It goes on to identify the various techniques and tools used by parents and the social services to prevent child abuse. The next writer argues that child abuse by parents and guardians are prompted by substance abuse, mental illness, domestic...
9 Pages(2250 words)Essay

...? THE LASTING EFFECTS AND REPETITIVE NATURE OF CHILD ABUSE Child abuse has been a recorded as an increasing health issue among families in recent decades. Most of the reported abuses were received by various organizations which come in contact directly with the victims, whether through medical, mental, or legal assistance. The collected data from these groups were able to establish the steady rise in the number of abuse cases in families, as well as the socio-demographic characteristics of the families where abuse is most-likely to happen. Reviewing these risk factors, child psychologists designed...
7 Pages(1750 words)Research Paper

...on the child's future, including emotional, physical, social, financial and other impacts Sexually abused children, when not well counseled, suffer from the loss of self esteem and confidence, the feeling of safety, and can develop regressive behaviours such as bed-wetting. In future, they may also exhibit aggressive behavior towards others and may even become abusers themselves (Corby, 2005). They tend to be preoccupied with sexual subjects and have very real difficulties in trusting other people when they become adults. Adults who were sexually abused as children may also suffer from pains that seem to have no physical cause, and...
3 Pages(750 words)Essay

...Child Abuse Topic Child abuse Tentative Research Questions In what ways is child abuse related to drug abuse by parent/guardian? 2. Do parents/guardian who was abused as children abuse their own children? 3. Is there a relationship between marital problems between couples and their propensity to abuse their child? The Main Problem Child abuse leads to negative outcomes in children (Finkelman, 1995). Child abuse is an important problem...
1 Pages(250 words)Essay

...Child abuse Child abuse Children are a blessing from God and deserve love just like anyone else. However, in the recent past many researches have indicated that several children are being abused. This should come as a bad news especially in this 21st Century where the youth form a large percentage of the population. According to some researchers like Besharov et al (2001), there are many cases which go unreported, uninterrupted or misreported. According to stop it now (www.stopitnow.org) a world organization that prevents child abuse, reports that a third of girls and nearly 1 in seven...
4 Pages(1000 words)Research Paper
sponsored ads
Save Your Time for More Important Things
Let us write or edit the essay on your topic "Child Abuse with Adopted children" with a personal 20% discount.
GRAB THE BEST PAPER

Let us find you another Essay on topic Child Abuse with Adopted children for FREE!