I'M NOT SURE - Essay Example

Comments (0)
Add to wishlistDelete from wishlist
Cite this document
Summary
However, it has been restricted, at least by outsiders, to the study of only well-known works by famous philosophers, most notably Confucius. It is not foreigners only who seem to pay the most attention to…
Download full paperFile format: .doc, available for editing
HIDE THIS PAPERGRAB THE BEST PAPER92.4% of users find it useful 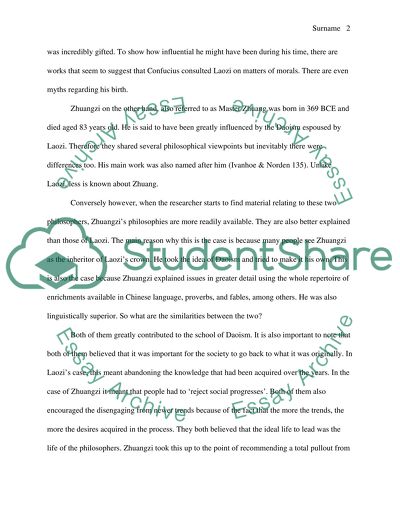 Extract of sample "I'M NOT SURE"

Download file to see previous pages One of the things outsiders are most interested in is the philosophies. Thus, names like Laozi and Zhuangzi are now better known than before. This paper shall focus on the philosophies of these two, hitherto, less known philosophers. In the paper I shall explain their philosophies, draw comparisons and contrasts, and then endeavor to point out the superior philosophy among the two.
Laozi was born and died during the reign of the Zhou dynasty. He was a firm believer in Taoism. He was a philosopher in then ancient China. His best work was the Tao Te Ching. This has led to him variously to be anointed as the founder of Taoism (pronounced as Daoism). There are many controversies regarding his main work referred to above. There are those who believe that the Tao Te Ching was a compilation of several Tao sayings by several other people over time (Ivanhoe & Norden 113).
There is also a side that believes that this was entirely the work of Laozi. This is a situation very much like what Shakespeare faces today. However, there is no contention that he was incredibly gifted. To show how influential he might have been during his time, there are works that seem to suggest that Confucius consulted Laozi on matters of morals. There are even myths regarding his birth.
Zhuangzi on the other hand, also referred to as Master Zhuang was born in 369 BCE and died aged 83 years old. He is said to have been greatly influenced by the Daoism espoused by Laozi. Therefore they shared several philosophical viewpoints but inevitably there were differences too. His main work was also named after him (Ivanhoe & Norden 135). Unlike Laozi, less is known about Zhuang.
Conversely however, when the researcher starts to find material relating to these two philosophers, Zhuangzi’s philosophies are more readily available. They are also better explained than those of Laozi. The main reason why this is the case is because many people see Zhuangzi as the inheritor of Laozi’s crown. ...Download file to see next pagesRead More
Share:
Tags
Cite this document
(“I'M NOT SURE Essay Example | Topics and Well Written Essays - 1250 words - 1”, n.d.)
I'M NOT SURE Essay Example | Topics and Well Written Essays - 1250 words - 1. Retrieved from https://studentshare.org/religion-and-theology/1618728-im-not-sure

CHECK THESE SAMPLES OF I'M NOT SURE

...1. What elements of the internal environment is the organization aiming to change?What is the organisation hoping to achieve by this, what are the problems under investigation? Evaluate the steps that have been taken to resolve these matters. I-core Soft Ltd. company is located in London, and it is a vendor for software development projects. Starting in 1995 with just two people, Rob Natan and Paul Coleman, who were the co-founders of I-core Soft Ltd., it has now moved on to employ a team of 85, including over 10 senior Engineers, a pool of 45 junior Engineers, 10 creative visualizers and several administrative staff members. I-core Soft Ltd. has had a very humble beginning, starting as a co-operative project development with Rob...
8 Pages(2000 words)Case Study

...THE LEGACY OF QUEEN ELIZABETH – I Proud and haughty, as although she knows she was born of such a mother, she nevertheless does not consider herself of inferior degree to the Queen, whom she equals in self-esteem; nor does she believe herself less legitimate than her Majesty, alleging in her own favor that her mother would never cohabit with the King unless by way of marriage, with the authority of the Church.... She prides herself on her father and glories in him; everybody saying that she also resembles him more than the Queen does and he therefore always liked her and had her brought up in the same way as the Queen. – Giovanni Michiel, Venetian Ambassador, spring 15571. Born on the 7th of September, 1533, and daughter of King Henry...
11 Pages(2750 words)Assignment

President Clinton addressed an audience comprising clergymen and ministers. The buildup to this event was much hyped as the earlier statement made by the President before the independent Ken Starr counsel on August 17, 1998, was charged with perjury and deliberate obfuscation of truth. Moreover, the earlier speech did not mention Monica Lewinsky and her family – a form of non-renouncing apology, which is a rhetorical ploy to generalize one’s actions, in a bid to justify one’s wrongdoing in a noncommittal manner. Such an approach diminishes the graveness of the action for which an entire nation was ashamed of, not to mention the tremendous social and psychological damage it did to Monica Lewinsky and her family.

... that I enjoy for example I play tennis, and I participate in friendly swimming competitions. I never envisioned that marriage was for me, the concept of being tied down by a wife and children did not appeal to me at all. Seeing my parents raise five children – and I know for sure that we were not an easy bunch- made me doubt if I had that capability. However, volunteering has completely changed my mind. Seeing firsthand the suffering of those children whose parents did not make better choices in life made me want to show change. I look forward to meeting a beautiful young lady and get married. I now hope that I will get to be a father someday and be a good father just like my father was to me and my siblings. My mother is a very strong...
7 Pages(1750 words)Personal Statement

... Career Research Paper (Mechanical Engineering at BMW M model) In both developing and developed economies, careers form an important path to sustainable economic growth, and it is the concern of the government to ensure it is sustainable to all its citizens. There are various professions around the world ranging from probation officer, accountant, dietician, intellectual, property, attorney, App UI designer, nurse mechanical engineer, high school, PE instructor among other. All these professions contribute to the betterment of a country and the well-being of the human race. However, mechanical engineer as a profession still stands out as the best amongst them all (Murthy, 63). Most companies depend on a given form of mechanical systems...
12 Pages(3000 words)Case Study
sponsored ads
Save Your Time for More Important Things
Let us write or edit the essay on your topic "I'M NOT SURE" with a personal 20% discount.
GRAB THE BEST PAPER

Let us find you another Essay on topic I'M NOT SURE for FREE!