Comments (0)
Add to wishlist Delete from wishlist
Cite this document
Summary
Studies to examine the long term recidivism rates of child molesters released from prison cannot be expected to show encouraging results. This fact is amply demonstrated by the statement that of the 197 child molesters released from prison between 1958 and 1974, 42% were reconvicted for sexual crimes, violent crimes or both…
Download full paper File format: .doc, available for editing
HIDE THIS PAPERGRAB THE BEST PAPER94.8% of users find it useful 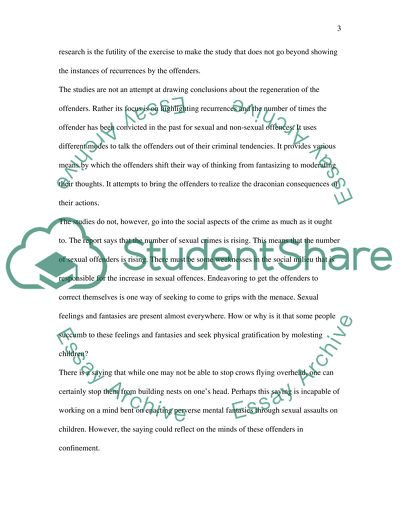 Download file to see previous pages These methods have their limitations and are not entirely dependable to forecast the behavioral patterns of the offenders. However, they are useful because they reveal the tendencies of the offenders and play a role within their own parameters in highlighting measures such as pedophilia, hostility, neuroticism, physical object anxieties, social object anxieties, muscle tension, feelings of inferiority, and how much the offenders feel responsible for their fate.
The study points out that there has been little research that has linked changeable risk indicators to the recidivism of child molesters. Perhaps one of the reasons for this lack of research is the futility of the exercise to make the study that does not go beyond showing the instances of recurrences by the offenders.
The studies are not an attempt at drawing conclusions about the regeneration of the offenders. Rather its focus is on highlighting recurrences and the number of times the offender has been convicted in the past for sexual and non-sexual offences. It uses different modes to talk the offenders out of their criminal tendencies. It provides various means by which the offenders shift their way of thinking from fantasizing to moderating their thoughts. It attempts to bring the offenders to realize the draconian consequences of their actions.
The studies do not, however, go into the social aspects of the crime as much as it ought to. The report says that the number of sexual crimes is rising. This means that the number of sexual offenders is rising. There must be some weaknesses in the social milieu that is responsible for the increase in sexual offences. Endeavoring to get the offenders to correct themselves is one way of seeking to come to grips with the menace. Sexual feelings and fantasies are present almost everywhere. How or why is it that some people succumb to these feelings and fantasies and seek physical gratification by molesting children
There is a saying that while one may not be able to stop crows flying overhead, one can certainly stop them from building nests on one's head. Perhaps this saying is incapable of working on a mind bent on enacting perverse mental fantasies through sexual assaults on children. However, the saying could reflect on the minds of these offenders in confinement.
The studies attempt to categorize the offenders' mental faculties. It tries to use treatment and control, and find out how the offenders' behavior changes over a period of time. The severity of each offender's case is also taken into consideration before slotting him into the treatment or controls group. In other words, due care is taken so that offenders are slotted into groups where there is the likelihood that they benefit from the program. The idea is to pattern their way of thinking to conform to those of the mainstream public.
The exercise of attempting to draw child molesters into mainstream population is fraught with dangers and risks. The aim must be to reform the offender to a level where they perform better than the average person.
The studies ...Download file to see next pages Read More
Share:
Tags
Cite this document
(“Critical review of two empirical papers Book Report/”, n.d.)
Critical review of two empirical papers Book Report/. Retrieved from https://studentshare.org/religion-and-theology/1503334-critical-review-of-two-empirical-papers

CHECK THESE SAMPLES OF Critical review of two empirical papers

Research ethics was maintained as the identity of the individuals participating was kept secret. As far as the validity of the study was concerned, the researchers attempted to use content validity in order to get an accurate response. The content validity focused on measuring off the ethnicities and gender percentages within the area and attempting to get a random sample of individuals via the phone. Their approach to random calling allowed for a significant random sample in the study. There were a few issues, however, with this type of approach. Those answering the phone sometimes were not always the desired individual, and not all of the desired people were surveyed. Different replacements did have to be used, and the attempt w...
6 Pages (1500 words) Literature review

In order to compare the welfare system of the three proposed countries, it is important to first develop a comparative method that would guide in comparing the three states. For the purpose of this paper, a binary comparison would be conducted. The implicit comparison would deal with Britain while the explicit comparison would explore the USA and Canada. Thereby a small N’ study would be used, that is, of three countries.
The three countries selected to share a similarity in the form that these countries are a welfare state. This is when welfare is mainly funded by the state. While the USA and Canada focus on the liberal welfare state, the welfare state of the UK is not quite defined.
The comparison of the welfare...
8 Pages (2000 words) Term Paper
sponsored ads
Save Your Time for More Important Things
Let us write or edit the book report/review on your topic "Critical review of two empirical papers" with a personal 20% discount.
GRAB THE BEST PAPER

Let us find you another Book Report/Review on topic Critical review of two empirical papers for FREE!