Comments (0)
Add to wishlistDelete from wishlist
Cite this document
Summary
Dale, an Irish-American, aged fifty-five years old is a male client whose condition (which his brother refers to as ‘sadness’) compels him to seek for clinical intervention. They traced the center through a referral system they found on the internet. He was escorted by his…
Download full paperFile format: .doc, available for editing
HIDE THIS PAPERGRAB THE BEST PAPER98.5% of users find it useful 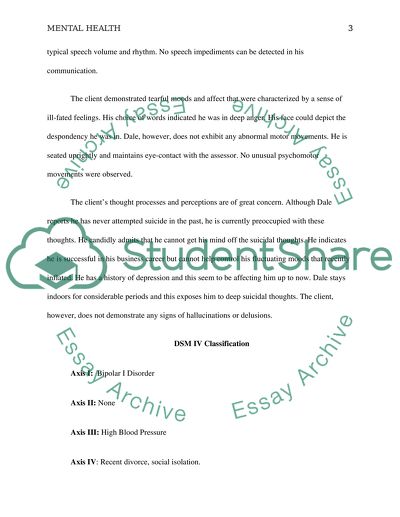 Mental Health Status Exam Client’s Clinician’s Name:
Client’s Date of Birth: Date of Evaluation:
Client’s Age
Dale, an Irish-American, aged fifty-five years old is a male client whose condition (which his brother refers to as ‘sadness’) compels him to seek for clinical intervention. They traced the center through a referral system they found on the internet. He was escorted by his brother Todd, who identified some unusual psychological tendencies prompting them to seek for help. They made enquiries and booked for an appointment via telephone. The interview sessions were conducted at the clinic.
Physically, Dale is a relatively tall, immaculately dressed man. The client indicated based on the observation of his dressing that he has not had any problems with self-care. The assessor and the client (Dale) managed to build a rapport that enabled an effective interaction. The client was willfully opened up and cooperated with the assessor in providing sufficient information about his condition.
Throughout the assessment, Dale is confident while he narrates the story of his life. It is clear to see that he is oriented to time, place and self. He accurately recounts detailed information about his past. Both his long term and short term memories are functional. He can integrate information and connect the past with the present. His speech is articulate and lucid. He has a typical speech volume and rhythm. No speech impediments can be detected in his communication.
The client demonstrated tearful moods and affect that were characterized by a sense of ill-fated feelings. His choice of words indicated he was in deep anger. His face could depict the despondency he was in. Dale, however, does not exhibit any abnormal motor movements. He is seated uprightly and maintains eye-contact with the assessor. No unusual psychomotor movements were observed.
The client’s thought processes and perceptions are of great concern. Although Dale reports he has never attempted suicide in the past, he is currently preoccupied with these thoughts. He candidly admits that he cannot get his mind off the suicidal thoughts. He indicates he is successful in his business career but cannot help control his fluctuating moods that recently inflated. He has a history of depression and this seem to be affecting him up to now. Dale stays indoors for considerable periods and this exposes him to deep suicidal thoughts. The client, however, does not demonstrate any signs of hallucinations or delusions.
DSM IV Classification
Axis I: Bipolar I Disorder
Axis II: None
Axis III: High Blood Pressure
Axis IV: Recent divorce, social isolation.
Axis V: 40
Recommendations
Recommendations
Rationale
i.) It is recommended that Dale be referred to a psychiatric/ clinical-psychological therapy.
ii.) It is recommended that Dale be taken through Cognitive Behavioral Therapy (CBT).
iii.) It is recommended that the client seek proper examination and medication for high blood pressure.
i.) The assessment conducted indicates Dale has fluctuating moods that have existed for mildly several years (shifting from depressive to hypomanic moods) hence the need for treatment.
ii.) The client has shown suicidal tendencies and CBT would help him restructure his thoughts as well as behavior.
iii) The client has medications for HBP which indicates the existence of a serious medical condition.
Assessing for Competence
Client is enthusiastic about his business.
He recognizes he has a problem.
The client is cooperative and willing to adjust. Read More
Share:
Tags
Cite this document
(“Mental Health Status Exam Case Study Example | Topics and Well Written Essays - 500 words”, n.d.)
Mental Health Status Exam Case Study Example | Topics and Well Written Essays - 500 words. Retrieved from https://studentshare.org/psychology/1697170-mental-health-status-exam

I have attended to patients' needs; this in turn has rewarded me with a deep sense of satisfaction. My joy is renewed whenever they smile and tell me how comfortable they are. During my experiences I have had the opportunity to observe medical and dentistry checks along with participating in discussions and was able to consult doctors regarding a career in health. This has provided me with an enhanced understanding of the working environment, as well as demonstrating the importance of teamwork between healthcare professionals, ensuring that patients received the best treatments and care. Having the opportunity to speak to patients on a one to one basis, I was able to hone my communication skills towards the patient and their situ...
3 Pages(750 words)Personal Statement

...? Altered Health Status and Promotion in Mental Health Counseling Word Count: 2,516 (10 pages Select a service user with a physical health statusproblems/needs. (500 words) The profile is of a 23-year-old Angolan male named Kwame Abouja (not his real name). He is on a forensic ward. Mr. Abouja has exhibited some very strange behaviours, which have landed him on the forensic ward. It is a psychiatric unit. Mr. Abouja has been diagnosed as a paranoid schizophrenic. As such, he has schizoaffective tendencies, and exhibits all the classical symptoms of the schizoid spectrum disorder family. His unusual behaviours included the following. He entered without a licence and pointed a gun at a shop assistant. He stabbed a friend during an unprovoked...
8 Pages(2000 words)Essay

... Lecturer: Case study of Linda When working on this assignment the following is an easy essay outline that I have come up with as an input in data and assessment and plan as regards the response to the Mental Status of the client. Mental Status Exam The mental status exam that was carried out is distinctively illustrated below and the following elements of the MSE have been put into consideration: Appearance, Attitude, Mood, Speech, Thought Processes, Thought Content, Perception, Orientation, Cognitive Function, Judgment, and Insight. After carefully reading and going through the case of Linda, I can precisely draw up some cognitive solutions and come to the understanding that Linda has a very big and major problem that she must be helped...
3 Pages(750 words)Assignment

...Mental Health and Mental Disorders There are various approaches in modern psychotherapy that are regarded as useful and effective. Some specialists prefer one of available methodologies; the others combine strategies and methods from several theories. Cognitive theory is one of the most popular theories that are used in the field of psychotherapy at present. Cognitive theory did much for understanding the mechanisms and nature of mental disorders in general and anxiety in particular. The essence idea of cognitive therapy is to make a persons change their attitude to the things. One of the specialists that base their practice on the concepts of cognitive theory was Albert Ellis. He worked out Rational Emotive Behavior Therapy. This author...
5 Pages(1250 words)Essay

... Mental Status Exam (Culture) 25 November Components of a Mental Status Examination The mental status examination(MSE) is a basic tool used by psychiatrists to help them determine the current mental state of a patient. The results of the MSE are then combined with the biographical and historical information about the patient to form a broader picture that can help the clinician make an accurate diagnosis, make a psychiatric formulation and a treatment plan. The key approach of an MSE is seeing the world from a patients perspective known as a descriptive psycho-pathology which is opposed to the earlier method of the psychoanalytic or interpretive approach made by the psychiatrist. The MSE is a systematic collection of data gathered...
2 Pages(500 words)Essay

...﻿ The Mental Status Examination My interviewee is called Joni. He is 27 years old as at now. Joni always uses cocaine and this has taken place for the last nine years. Initially, Joni was smoking the drug, but with time in the last five years, he gradually started injecting himself with it. He currently does this two to four times a day. Personal Status The middle aged man, Joni is the first among the four siblings. He has a sister who is his immediate follower, and two other brothers. He has been constantly having problems with his widowed mother since his father’s death, almost ten years ago. His family is rich and as the first born, after the death of his father, the mother trusted him and was given a lot of money. He was finally...
4 Pages(1000 words)Essay

...The Diagnosis of Altered Mental Status Affiliation with more information about affiliation, research grants, conflict of interest and how to contact The Diagnosis of Altered Mental Status Introduction: Altered Mental Status can be perceived as a mental health problem in which the patient demonstrates mental disorders such as “impaired cognition, diminished attention and reduced awareness” and, besides, his or her level of consciousness may keep altering (Kanich et al, 2002, p.613). Evidence suggests that it is one of the major and common problems found in emergency departments and that “4% to 10%” of patients manifest its symptoms (p.613). It can occur in patients of all age groups but in younger adult it is caused by “traumatic...
2 Pages(500 words)Assignment

... the children behave in school, while with their age mates or at home, not overlooking the relevance of age as a determinant in diagnosis of mental problems. In this case, such an evaluation and determination process should be vast and exclusive in that it should encompass and incorporate the various aspects of a child’s life that influence their attitudes. The study by Christophersen (2013) noted that the low social status children in the society face an increased exposure and risk of encountering mental problems, including street children, school dropouts, crime and criminals apprehended by the authority. However, the study argued that if the symptoms of mental problems are identified early enough, they are curable ensuring...
4 Pages(1000 words)Essay
sponsored ads
Save Your Time for More Important Things
Let us write or edit the case study on your topic "Mental Health Status Exam" with a personal 20% discount.
GRAB THE BEST PAPER

Let us find you another Case Study on topic Mental Health Status Exam for FREE!