How to Be a Professional Prison Psychologist - Coursework Example

Comments (0)
Add to wishlist Delete from wishlist
Cite this document
Summary
From the paper "How to Be a Professional Prison Psychologist" it is clear that people should adhere to the duties when analyzing an ethical dilemma. This means that a person will follow his or her obligations to another individual because upholding one's duty is what is considered ethically correct…
Download full paper File format: .doc, available for editing
HIDE THIS PAPERGRAB THE BEST PAPER92.6% of users find it useful 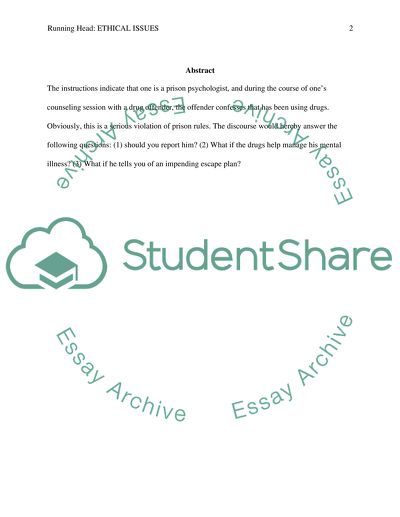 Extract of sample "How to Be a Professional Prison Psychologist"

The instructions indicate that one is a prison psychologist, and during the of one’s counseling session with a drug offender, the offender confesses that has been using drugs. Obviously, this is a serious violation of prison rules. The discourse would hereby answer the following questions: (1) should you report him? (2) What if the drugs help manage his mental illness? (3) What if he tells you of an impending escape plan?

Ethical Issues
Given the case scenario, as a professional prison psychologist, it is within one’s scope of responsibilities to adhere to expected ethical and moral codes of conduct as stipulated in one’s profession. If a prisoner who is a drug offender confessed that he still has been using drugs, there are different violations that must be noted and reported, as required: (1) the kind of drugs being used and the frequency by which they are used; (2) the manner by which the drug offender accessed the drugs; (3) if the drugs are used to manage his mental illness, as presumed; this must be validated with other medical practitioners within the prison setting; and (4) an impending escape plan must at all cost be duly reported to increase vigilance on his case; but with appropriate interventions to be provided in the form of intensified counseling with other collaborative rehabilitation techniques, as needed.
As a prison psychologist, one’s duty is to assist the drug offender to be rehabilitated and to be reintegrated in society in the future. One would, therefore, report his noted violations for the purpose of imposition of corrective interventions, as needed. The drug offender must be comprehensively assessed in his mental capacity to perform tasks that are consistent with a rehabilitated individual to prepare him for reintegration to society in the future. Read More
Share:
Tags
Cite this document
(How to Be a Professional Prison Psychologist Coursework, n.d.)
How to Be a Professional Prison Psychologist Coursework. Retrieved from https://studentshare.org/psychology/1592319-ethical-issues-drop-box-12

“How to Be a Professional Prison Psychologist Coursework”, n.d. https://studentshare.org/psychology/1592319-ethical-issues-drop-box-12.
Comments (0)
Click to create a comment or rate a document

CHECK THESE SAMPLES OF How to Be a Professional Prison Psychologist

The chemically-impaired nurse is a nurse who has a substance-addiction problem. These substances include drugs and/or alcohol. These nurses usually have impaired functions because of their addiction to drugs or alcohol and their nursing practice is often compromised as a result of their addiction (Ellis & Hartley, 2004). A study conducted by Sullivan and colleagues in the 1980s revealed that substance addiction problems are about as great as the percentage for substance addiction in the general population (as cit...
7 Pages (1750 words) Coursework

Given the emergent nature of online commerce, it is a tough task for retailers to develop a website that meets all expectations from consumers. This view is supported by a survey conducted by the UK’s largest e-consultancy Cap Gemini. The survey identified several key disadvantages for online shoppers. Some of these include “’ Availability’, ‘Can’t be in to receive delivery’, ‘Premium charged for delivery’, ‘Can’t see or feel the merchandise’, etc.” (Quader & Quader, 2008) These are not trivial complaints by any means and despite the e-retailing industry setting foot into its third decade in existence, there are no satisfactory solutions found for th...
6 Pages (1500 words) Literature review

One of the major policies undertaken by the British Government in the last two years was fiscal decentralization. The government has taken steps to ensure that improvement is made in the country’s...
7 Pages (1750 words) Coursework
sponsored ads
Save Your Time for More Important Things
Let us write or edit the coursework on your topic "How to Be a Professional Prison Psychologist" with a personal 20% discount.
GRAB THE BEST PAPER

Let us find you another Coursework on topic How to Be a Professional Prison Psychologist for FREE!