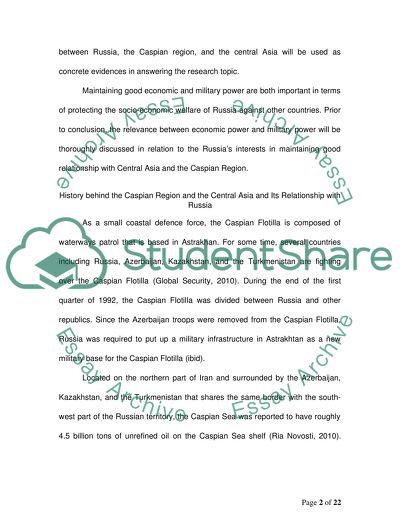 Download file to see previous pages This essay discusses the relevance between economic power and military power of Russia in relation to the its interests in maintaining good relationship with Central Asia and the Caspian Region. To secure Russia’s economic and political influence over the Caspian region, the Russian government is preparing and maintaining its military power in the Caspian region
Considering the economic and military power of Russia, this study discusses the history behind the Caspian Flotilla. As part of going through the main discussion, some real-life current events that are taking place between Russia, the Caspian region, and the central Asia are used as concrete evidences in proving the point of the research.
Located on the northern part of Iran and surrounded by the Azerbaijan, Kazakhstan, and the Turkmenistan, the Caspian Sea is a point of political argument and fight between the Azerbaijan, Britain, and Russia because of its 20 to 40 billion barrels of proven oil reserves
Similar to case of the Caspian region, one of the main reasons why Russia is maintaining a good relationship with the Central Asia is because of the oil business. Since most of the Russian oil pipelines are controlled by Moscow, the Russian government has to maintain its political partnership with Central Asia to keep the flow of oil business transaction between Russia and other nearby countries in Asia normal.
Since a lot of countries in Central Asia have weak political power in the world market, Russia is also enjoying a lot of economic and political advantages there.
...Download file to see next pages Read More
Share:
Tags
Cite this document
(“Russia`s Motives in Relations with Central Asia and the Caspian Region Essay”, n.d.)
Russia`s Motives in Relations with Central Asia and the Caspian Region Essay. Retrieved from https://studentshare.org/politics/1572032-russias-motives-in-relations-with-central-asia-and-the-caspian-region

“Russia`s Motives in Relations With Central Asia and the Caspian Region Essay”, n.d. https://studentshare.org/politics/1572032-russias-motives-in-relations-with-central-asia-and-the-caspian-region.
Comments (0)
Click to create a comment or rate a document

By virtue of the Health and Safety At Work Act 1974 the employer is under a statutory duty to maintain the water and sewage plant if it is reasonable and practical to do so. The duty is contained in Section 2 which mandates that the employer ensure the safety and welfare of all empl...
15 Pages (3750 words) Case Study

The book by Frantz Fanon title ‘Black Skin, White Masks’ deals with the social revolution that brews in the minds of the oppressed. (Markmann, 1967). In this regard, films are a medium and an art form rolled into one. They have the capacity to transport viewers and put across messages that can transform the lives of entire audiences. The power of cinema is one that has been hailed as the hardest hitting of art forms, even from the days of silent movies. The term or phrase, ‘Motion Pictures’ is literally the most accurate definition of the most powerful element of cinema. Moving pictures are the most powerful form of expression in art. This art form called cinema relies on the use of pictures that move in or...
8 Pages (2000 words) Term Paper

It now directs and supervises banking activities through a complex set of tools and instruments that embody the country’s monetary policies.
Central banking can be traced to the 17th century Swedish Riksbank. The bank was created in 1668 as a joint-stock bank and helped the Swedish government with its monetary needs as well as serve as a clearinghouse for commerce. Just a few decades after, or in 1694, England established its own joint-stock bank called Bank of England. It was established primarily to buy the country’s debts. Other European countries soon followed and established their own national banks not only to serve their debts but also to solve monetary disarray as in the case of France’s Banque de Fr...
7 Pages (1750 words) Case Study

President Andrew Jackson led an example of an administration that set the stage for the way in which James Polk would lead. In 1817, as a still yet military leader, Jackson led the United States into the first of three conflicts with the Seminole Indians from which the acquisition of Florida from Spain would be negotiated and finalized. The situation with Spain was tenuous and should have been dealt with in a diplomatic and cautious manner, but in 1817 President Monroe wrote a letter to General Jackson stating that “Great interests...
8 Pages (2000 words) Article
sponsored ads
Save Your Time for More Important Things
Let us write or edit the essay on your topic "Russia`s Motives in Relations with Central Asia and the Caspian Region" with a personal 20% discount.
GRAB THE BEST PAPER

Let us find you another Essay on topic Russia`s Motives in Relations with Central Asia and the Caspian Region for FREE!