Comments (0)
Add to wishlistDelete from wishlist
Cite this document
Summary
The following essay casts light upon the Lance Armstrong's philosophy of life. It is common knowledge, Lance Armstrong is a famous cyclist who won the Tour de France title seven consecutive times. However, he was recently stripped of all his titles because of doping charges. …
Download full paperFile format: .doc, available for editing
HIDE THIS PAPERGRAB THE BEST PAPER95.7% of users find it useful 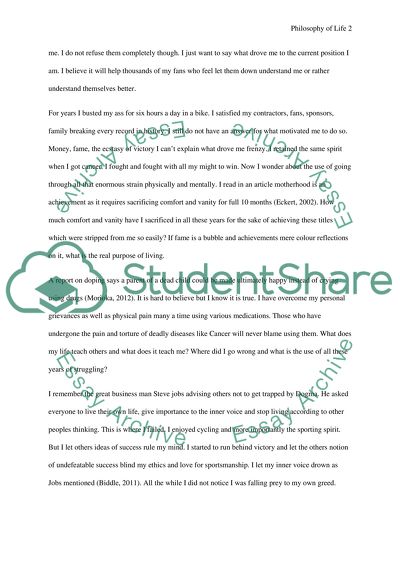 Extract of sample "Lance Armstrong Talks about Philosophy of Life"

Download file to see previous pages My fellow world citizens, I am Lance Armstrong, the famous cyclist. The recent headlines do not allow me to claim the fame. But, I think I have all the right to introduce myself as a famous cyclist whether I have my titles or not. Even my negative publicity is linked to cycling without which I am nothing. I am not here to claim I am innocent or confess. I just want to share a few of my realizations with you. I had great plans after retirement. I wanted to do so many things after I survived cancer, after I retired after I was free from my busy schedules. But, the after came so suddenly and unexpectedly, stripping me of all my dignity. I have all the time in the world now to do whatever I want and what I do with all of it - I ride my cycle.
I started to ride my cycle when I was two and continue it till now. I started to ride professionally at the age of 13. I was a swimmer before that. I got fascinated by the bike when I was 12. At that time my mother used to say "if you’re going to get anywhere, you’re going to have to do it yourself because no one is going to do it for you". I had no idea where I should go but believed winning was the only thing necessary in life. I became a bully. I started to dope. My life was driven by an unquenchable thirst to win, to win like nobody else. I do not know who put that idea into me, my coach, my victories, my fans or my family. I saw everybody around me running for something elusive. I was happy when I won. But was I satisfied? No. I was ready to do anything to establish what others cannot. ...Download file to see next pagesRead More
Share:
Tags
Cite this document
(“Lance Armstrong Talks about Philosophy of Life Essay”, n.d.)
Retrieved from https://studentshare.org/people/1608056-lance-armstrong-talks-about-philosophy-of-life

CHECK THESE SAMPLES OF Lance Armstrong Talks about Philosophy of Life

Jean Jacques Rousseau (1712 to 1778) was a Genevois philosopher. Besides that, he was a writer and a composer of romanticism. His philosophies were very influential so much so that they were considered to have triggered the French...
7 Pages(1750 words)Coursework

Religion clearly plays a dramatic role in the Middle East. The truth is that nationalism also plays a huge role. The conflict has a long and bloody history and many people have tried and failed to solve it before. Nothing new has happened in the last few years to make it any easier to solve. In fact, some things have gotten quite a bit worse. There is little visionary leadership available on either side. As things stand now, it is unlikely this conflict will be resolved. The two sides are intractably opposed to one other. Furthermore, the Arab world is poorly developed...
6 Pages(1500 words)Assignment
sponsored ads
Save Your Time for More Important Things
Let us write or edit the essay on your topic "Lance Armstrong Talks about Philosophy of Life" with a personal 20% discount.
GRAB THE BEST PAPER

Let us find you another Essay on topic Lance Armstrong Talks about Philosophy of Life for FREE!