Comments (0)
Add to wishlist Delete from wishlist
Cite this document
Summary
This paper is going to be a critical analysis of a research study that was quantitative in nature and will focus on protection of the respondents, the data collection, data analysis and management, and the finding of the study and their interpretation…
Download full paper File format: .doc, available for editing
HIDE THIS PAPERGRAB THE BEST PAPER91.9% of users find it useful 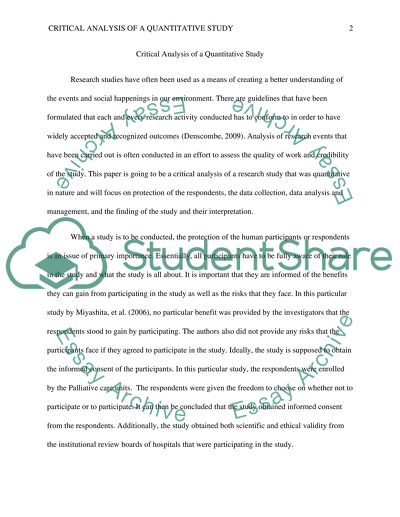 Extract of sample "Critical Analysis of a Quantative Study"

Download file to see previous pages When a study is to be conducted, the protection of the human participants or respondents is an issue of primary importance. Essentially, all participants have to be fully aware of their role in the study and what the study is all about. It is important that they are informed of the benefits they can gain from participating in the study as well as the risks that they face. In this particular study by Miyashita, et al. (2006), no particular benefit was provided by the investigators that the respondents stood to gain by participating. The authors also did not provide any risks that the participants face if they agreed to participate in the study. Ideally, the study is supposed to obtain the informed consent of the participants. In this particular study, the respondents were enrolled by the Palliative care units. The respondents were given the freedom to choose on whether not to participate or to participate. It can then be concluded that the study obtained informed consent from the respondents. Additionally, the study obtained both scientific and ethical validity from the institutional review boards of hospitals that were participating in the study.
With reference to data collection, there are independent and dependent variables. The author identified the variables as follows; the general population and the bereaved family were the dependent variables. The independent variables were the age and sex of the respondents. It is worth noting that the authors failed to overtly demonstrate the significance of obtaining the sex of the respondents as its value to the study was not clearly demonstrated. The authors chose to use questionnaire as the sole means of data collection. The authors did not provide a rationale for choosing to use this method of data collection. It would have beneficial for the authors to state for example why questionnaires were chosen over interviews for data collection. Again, using this method solely as the main method of data collection cast some doubt on the reliability of the data obtained. This is because respondents may give information without understanding the purpose of the study and thereby compromise the accuracy of the data (Creswell, 2008). But, by allowing the respondents to choose whether to respond or not to; they prevented any ethical issues from arising. The questionnaires did not request for any form of information that may be directly associated with any particular individual thereby assuring the respondents their privacy. The authors posted the questionnaires on August 2004 and then October 2004 for those who had failed to reply. The participant was expected to receive the questionnaire sent by mail and fill the information if he is willing to participate in the study. He would then post it back to the investigators. The primary objective of the study was to conceptualise the good death dimensions within the Japanese care center. The study also intended to clarify on the significance of each of the components of good death and explore the factors that influence an individual’s perception of good death. The authors used Cronbach’s alpha coefficients and explanatory factor analysis to be able to conceptualize a good death. The factor analysis enabled ...Download file to see next pages Read More
Share:
Tags
Cite this document
(“Critical Analysis of a Quantative Study Research Paper”, n.d.)
Retrieved from https://studentshare.org/nursing/1397930-research

“Critical Analysis of a Quantative Study Research Paper”, n.d. https://studentshare.org/nursing/1397930-research.
Comments (0)
Click to create a comment or rate a document

CHECK THESE SAMPLES OF Critical Analysis of a Quantative Study

As is well-known, we have had a turbulent past. We were a French colony for 80 years until we achieved independence. Now we are a multi-party democracy with Presidential form of Government. While the executive power rests with the...
6 Pages (1500 words) Case Study

In th...
8 Pages (2000 words) Case Study
sponsored ads
Save Your Time for More Important Things
Let us write or edit the research paper on your topic "Critical Analysis of a Quantative Study" with a personal 20% discount.
GRAB THE BEST PAPER

Let us find you another Research Paper on topic Critical Analysis of a Quantative Study for FREE!