Comments (1)
Add to wishlistDelete from wishlist
Cite this document
Summary
The researcher of this paper tends to maintain that human beings can be treated as means provided that the experimentations par with the ethical perceptions and medical research law and practice although there are arguments for and against. …
Download full paperFile format: .doc, available for editing
HIDE THIS PAPERGRAB THE BEST PAPER92.6% of users find it useful 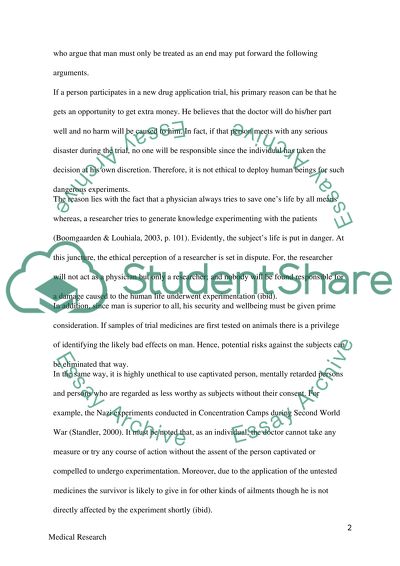 Download file to see previous pages This paper begins with the purpose of medical researches that is to invent new medicines for addressing ailments. If such medicines are tested in animals, we may fail to accurately predict the exact repercussions of such medicines on human beings. It is not sure that all medicines that work on animals should work on human beings. Moreover, a positive dimension of this is that it reduces the unethical treatment of animals in the name of medical research. For, human beings and other animals have equal importance in this world. Therefore, an experiment for the betterment of his race must be done on himself. One may say that all experimentations carried on in medical field intend the common good of the mankind and hence there is no problem in taking a few as the means to reach the end. However, humanitarians are always against treating man as means. The exponents who argue that man must only be treated as an end may put forward the following arguments. If a person participates in a new drug application trial, his primary reason can be that he gets an opportunity to get extra money. He believes that the doctor will do his/her part well and no harm will be caused to him. In fact, if that person meets with any serious disaster during the trial, no one will be responsible since the individual has taken the decision at his own discretion. Therefore, it is not ethical to deploy human beings for such dangerous experiments. The reason lies with the fact that a physician always tries to save one’s life by all means whereas, a researcher tries to generate knowledge experimenting with the patients. (Boomgaarden & Louhiala, 2003, p. 101). Evidently, the subject’s life is put in danger. At this juncture, the ethical perception of a researcher is set in dispute. For, the researcher will not act as a physician but only a researcher; and nobody will be found responsible for a damage caused to the human life underwent experimentation (ibid). In addition, since man is superior to all, his security and wellbeing must be given prime consideration. If samples of trial medicines are first tested on animals there is a privilege of identifying the likely bad effects on man. Hence, potential risks against the subjects can be eliminated that way. In the same way, it is highly unethical to use captivated person, mentally retarded persons and persons who are regarded as less worthy as subjects without their consent. For example, the Nazi experiments conducted in Concentration Camps during Second World War (Standler, 2000). It must be noted that, as an individual, the doctor cannot take any measure or try any course of action without the assent of the person captivated or compelled to undergo experimentation. Moreover, due to the application of the untested medicines the survivor is likely to give in for other kinds of ailments though he is not directly affected by the experiment shortly (ibid). On the other hand, it is not always possible to use man as end due to a number of constraints. Therefore, according to this opinion, man must be used as means as well. Such trials are usually conducted on relatively small number of healthy volunteers. ...Download file to see next pagesRead More
Share:
Tags
Cite this document
(“Ideological conflicts in medical research Essay”, n.d.)
Retrieved from https://studentshare.org/nursing/1395127-medical-law
(Ideological Conflicts in Medical Research Essay)
https://studentshare.org/nursing/1395127-medical-law.
“Ideological Conflicts in Medical Research Essay”, n.d. https://studentshare.org/nursing/1395127-medical-law.
Comments (1)
Click to create a comment or rate a document

we
westleyromaguer added comment 8 months ago
Student rated this paper as
This paper saved me today. I liked the style. It was very useful for my nursing course.

CHECK THESE SAMPLES OF Ideological conflicts in medical research

D. Smooth muscle cells: Though smooth muscle cells are recruited by day 3 or 4 of the wound along with fibroblasts, myofibroblasts, pericytes, and smooth muscle cells, their main role is fibroplasia, synthesis of connective tissue matrix, tissue remodeling, wound contraction, and wound strength. They do not produce cytokines and chemoattractants (Sephel, 72). Hence this is not the correct answer.
A 68-year-old man with prostate cancer and bone metastases presents with shaking chills and fever. The peripheral WBC count is 1,000/uL (normal = 4,000-11,000/uL). Which of the following terms best describes this hematologic finding?
A. Leukocytosis: This is not the correct answer because leukocytosis means an increase in WBC co...
14 Pages(3500 words)Case Study

The federal government, through the 2009’s Controlled Substances Act, makes the use of marijuana a criminal offense. However, various states, such as Arizona, Colorado, and California, have legalized the use of cannabis for therapeutic purposes. This paper presents an argument that marijuana should be made legal for its therapeutic uses.
The legalization of medical cannabis is justified because of the positive therapeutic effects of the drug. Proponents of the legalization of medical cannabis argue that if marijuana is made illegal, patients will not be able to access and use it for the relief of their symptoms (Gwynne 29). Marijuana has been reported to be a safe drug for the treatment of various conditions. The drug a...
6 Pages(1500 words)Case Study
sponsored ads
Save Your Time for More Important Things
Let us write or edit the essay on your topic "Ideological conflicts in medical research" with a personal 20% discount.
GRAB THE BEST PAPER

Let us find you another Essay on topic Ideological conflicts in medical research for FREE!