Comments (0)
Add to wishlistDelete from wishlist
Cite this document
Summary
The Company is facing major problems at its Lima plant in that out of 50 positions the Company presented by the human resource manager, 23 of these positions had turned over for the plant implying that the…
Download full paperFile format: .doc, available for editing
HIDE THIS PAPERGRAB THE BEST PAPER96.8% of users find it useful 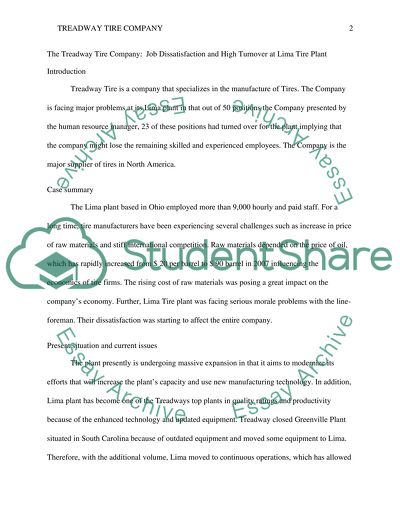 Extract of sample "Analysis on The Treadway Tire Company"

The Treadway Tire Company: Job Dissatisfaction and High Turnover at Lima Tire Plant The Treadway Tire Company: Job Dissatisfactionand High Turnover at Lima Tire Plant
Introduction
Treadway Tire is a company that specializes in the manufacture of Tires. The Company is facing major problems at its Lima plant in that out of 50 positions the Company presented by the human resource manager, 23 of these positions had turned over for the plant implying that the company might lose the remaining skilled and experienced employees. The Company is the major supplier of tires in North America.
Case summary
The Lima plant based in Ohio employed more than 9,000 hourly and paid staff. For a long time, tire manufacturers have been experiencing several challenges such as increase in price of raw materials and stiff international competition. Raw materials depended on the price of oil, which has rapidly increased from $ 20 per barrel to $ 90 barrel in 2007 influencing the economics of tire firms. The rising cost of raw materials was posing a great impact on the company’s economy. Further, Lima Tire plant was facing serious morale problems with the line-foreman. Their dissatisfaction was starting to affect the entire company.
Present situation and current issues
The plant presently is undergoing massive expansion in that it aims to modernize its efforts that will increase the plant’s capacity and use new manufacturing technology. In addition, Lima plant has become one of the Treadways top plants in quality ratings and productivity because of the enhanced technology and updated equipment. Treadway closed Greenville Plant situated in South Carolina because of outdated equipment and moved some equipment to Lima. Therefore, with the additional volume, Lima moved to continuous operations, which has allowed Treadways to amortize the substantial fixed costs of operating a tire plant over maximum production volume. Current issues within the plant is the rising cost of raw materials, high level of job dissatisfaction and tension that exist between hourly paid workers and foremen. Currently, there are no enough people qualified to be promoted to the ranks of foreman.
Desired state
The company desires to solve the turnover problem in order to make Lima Plant become Treadway’s top plant for productivity and its lowest cost producer in North America. The Company wants to have employees who are satisfied with their work. Due to this, the company conducted an employee satisfaction research, noticed that some supervisors were not happy with the job, and was concerned about the positions of line supervisors. There is need to increase intercompany transfers and the percentage of college graduates.
Usual problems
Usual problems at the plant are low morale among workers and recruitment of new workers, which is always a hard task.
Recommendation
In order to increase production, human resource manager at Lima plant should tackle the issue of employee morale by increasing their pay.
The human resource manager should also hire more college graduates to increase the number of people with knowledge and skills in tire production
The job of the foreman requires variety of resources, personnel, and administrative matters, which the company can handle by hiring more qualified people.
Conclusion
Summarily, the increase in costs of operation should allow the company to increase prices of its product to avoid making losses. Further, there is need to address the issue of employee dissatisfaction as this can halt the operation of the company. The company’s decision to update its equipment and adopt modern technology is a bold one since this will improve production and reduce production cost.
References
Daft, R. (2011). Management. Boston, MA: South-Western College Publisher.
Kandula, P. (2006). Performance management. New Delhi, India: PHI Learning Private Limited. Read More
Share:
Tags
Cite this document
(“Case analysis on The Treadway Tire Company Study”, n.d.)
Case analysis on The Treadway Tire Company Study. Retrieved from https://studentshare.org/miscellaneous/1614387-case-analysis-on-the-treadway-tire-company

“Case Analysis on The Treadway Tire Company Study”, n.d. https://studentshare.org/miscellaneous/1614387-case-analysis-on-the-treadway-tire-company.
Comments (0)
Click to create a comment or rate a document

CHECK THESE SAMPLES OF Case analysis on The Treadway Tire Company

...? Case Analysis: Jones Blair Company Case Analysis: Jones Blair Company Case Background and Problem Jones Blair Company is a privately held corporation reported to produce and market architectural paint under the Jones•Blair brand name. Given that the industry and architectural paint coating sector is in the maturity stage, coupled with a sluggish growth in sales, the need for continued research and development efforts and required compliance to governmental regulations regarding adherence to stipulated levels of volatile organic compounds (VOCs), Jones Blair is reflecting on the marketing strategy to...
4 Pages(1000 words)Essay

...? Zara Company Analysis Module Executive Summary Zara is one of the proficient players in the world of fashion and the leading brand of Inditex Group. The company’s financial prowess is so remarkable that it has been found to have a great effect the Spanish economy. This paper shall give an in depth analysis of the company’s internal and external environment. It further looks at the PR of the company and the major crises that have been facing the company over the years. A comprehensive analysis of the company’s strategy is done to establish the root of the company’s...
21 Pages(5250 words)Essay

...EXPERIAN PLC AND MARKET EFFICIENCY Introduction It is the purpose of this study to determine whether the market reacts to new information in a predictable fashion and to a significant degree by affecting the price of a given security. We have taken the case of Experian, Plc, a UK listed company, for the purpose of finding out whether the market is sensitive to new information. The period of January 25, 2010 to February 19, 2010 has been chosen for study. The efficient market concept The first aspect of the market to consider is market efficiency. Investors determine stock prices on the basis of the expected cash flow returns relative to the risk involved. They use all the information available or that can be reasonably obtained... through...
10 Pages(2500 words)Case Study

...What is the overarching problem facing Treadway tires (the focus of the case)? The overarching problem facing Treadway tires is the serious morale issues of staff at the line foreman level and that this dissatisfaction was beginning to spread to the other employee segments across the entire Lima plant (Skinner and Beckham 2). The intention of Ashley Wall is therefore to curb this growing dissatisfaction before it spreads to other employee-levels and gets out of hand. The line-foreman segment faced intense pressure from the general supervisor and area managers above them as well as from the hourly line-production employees below them. This high level of...
2 Pages(500 words)Case Study

...the expansion of the 1990s was the 2001 opening of most of the firm’s stores seen today (Data Monitor, 2007). However, Canadian Tire continues to grow even in current business environment, which is marred with numerous business issues and challenges. Challenges The company, as any other, has faced many challenges over the years in which it has remained in operation. For instance, it incurred a lot of losses during the formation of its many stores. These challenges are apparent even in contemporary times. For an illustration, in a 2007 SWOT analysis of the firm, Datamonitor showed that the company’s average returns and revenue per employee were rather low (Data Monitor,...
4 Pages(1000 words)Essay

...﻿ Company AnalysisTreadway Tire Company Question 1. What is the relationship between workers, foremen, supervisors and senior managers? There is obviously a divide in communication and concern between management and line foremen, with management and general supervisors only concerned with production numbers without taking in to account the inevitable technical and human lapses. Besides some insufficient measures nothing considerable has been done to resolve issues of the foremen while the relationship between unionized workers and foremen has further deteriorated. The analysis reveals that foremen has a lot on his plate without the...
3 Pages(750 words)Essay

1 Pages(250 words)Essay
sponsored ads
Save Your Time for More Important Things
Let us write or edit the case study on your topic "Case analysis on The Treadway Tire Company" with a personal 20% discount.
GRAB THE BEST PAPER

Let us find you another Case Study on topic Case analysis on The Treadway Tire Company for FREE!