Comments (0)
Add to wishlistDelete from wishlist
Cite this document
Summary
The second image described as St. Paul Outside the Walls, located in Rome manifest similar pillars with intricate designs on the ceiling and the semi-dome altar…
Download full paperFile format: .doc, available for editing
HIDE THIS PAPERGRAB THE BEST PAPER94.6% of users find it useful 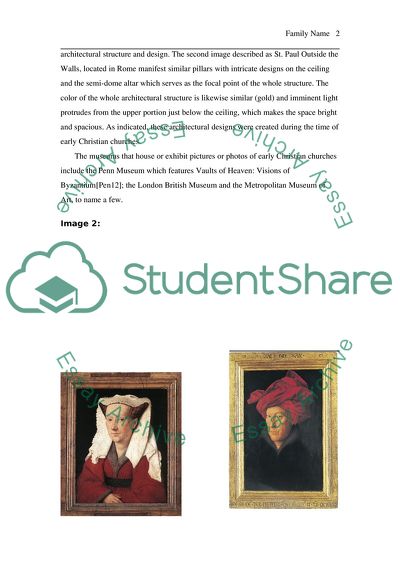 Extract of sample "Image read( a history of western art)"

Image Research Image The image found to be similar to the first image is that which is shown below: Photo 10.5St. Paul Outside the Walls, Rome, begun A.D. 385
Source: Adams 158
One strongly believes that the image is similar to the first one in terms of the architectural structure and design. The second image described as St. Paul Outside the Walls, located in Rome manifest similar pillars with intricate designs on the ceiling and the semi-dome altar which serves as the focal point of the whole structure. The color of the whole architectural structure is likewise similar (gold) and imminent light protrudes from the upper portion just below the ceiling, which makes the space bright and spacious. As indicated, these architectural designs were created during the time of early Christian churches.
The museums that house or exhibit pictures or photos of early Christian churches include the Penn Museum which features Vaults of Heaven: Visions of Byzantium (Penn Museum); the London British Museum and the Metropolitan Museum of Art, to name a few.
Image 2:

Early Renaissance
Photo 15.36 Jan van Eyck, Man in a Red Turban (Self-portrait?), 1433.Tempera and oil on wood, approx. 13  ⁄ 8 ×10 1 ⁄ 8
in. (33.3×25.8 cm).National Gallery, London, England.
Source: Adams 272
The second image is similar to the painting of Jan van Eyck, entitled Man in a Red Turban in terms of the image sharing the same serene and serious facial expression and the pose that shows the left side of the face as the prominent side. The hair is also covered by a white cloth (image 2) and with a red turban for the similar image. These images also share similarities in the style of the clothes worn, especially the V-type neckline, except in color. The eyes of the images seem to be glancing at the left portion due to the position of their head.
The early Renaissance paintings could be found in the following museums: National Gallery in London; Metropolitan Art Museum in New York; Museum of Fine Arts in Houston; to name a few (Encyclopedia of Art).

CHECK THESE SAMPLES OF Image read( a history of western art)

... HISTORY OF ART Part One: Jan Van Eyck, Arnolfini’s Wedding, 1434 vs. Diego Velasquez, Las Meninas, 1656 Jan van Eyckand Diego Velasquez are revered as baroque influential artists. They did several masterpieces which to date continue to give insight as to what Renaissance art entailed. Eyck in 1434 made a portrait of the wedding between Giovanni Arnolfini with his second bride, Jeanne de Cenami. This portrait is known as “the Arnolfini Marriage”. Diego Velasquez also made a portrait known as “Las Meninas” which doubles as an aesthetic as well as an intellectual piece. This piece was made in 1656, and exhibits some similarities to “The Arnolfini Marriage.” Velasquez uses refined technicalities, and combines them with profound... the sculpture...
4 Pages(1000 words)Essay

...and Section # of Non-western art history (Museum paper) I visited Asia Pacific museum, isone of the four museums in the country, who specialize in the arts and culture of Asia and Pacific region and the museum contains a lot of art work from various artists of Asia and Pacific region. The mission of the museum is to make people aware and to make them know about the culture and art of the region, which is not well known to them. I have seen many art pieces of the Asian origin and the ones who represent the culture of East and Pacific region. I chose the work of Elizabeth Keith, a painting named, "The Cock Fight", which...
6 Pages(1500 words)Essay

...Study Guide: History of Western Art Gothic Architecture & Development in European Countries Gothic architecture started in the 12th century to the 15th century in Europe and was a dominant architectural style for 400 years. It developed from the Romanesque and Byzantine influences of France. Structures of these styles use vertical tall pillars, spires, pointed arches, and flying buttresses. It is usually evident in Catholic cathedrals, monasteries and churches that have many bigger windows as compared to the structures in the Romanesque era. General characteristics of Gothic architecture are the soaring spaces and quality of light evident in cathedrals, the traditional basilican form...
5 Pages(1250 words)Essay

...is expressed in a pictorial form. The rapid line and delicate illusionism mark the whole work making each part of it, including the landscape and architectural details, seem to be “swept along in ecstatic movement” (,541). In this work of art, unlike Charlemagne’s Gospel, the roman tradition is substituted by a pure Carolingian style. Moissac last judgment Vs Daphne, Pantocrator The term “pantocrator” means ruler of the universe. The mosaic Pantrocrator image of the Christ is represented against a gold background in the center of the dome in the church of the Monastery of Daphne representing the Byzantine period. It was created in 1100. This Mosaic is one of the most complicated decorations in...
6 Pages(1500 words)Essay

...A. The Geneva Museum of Art and History is located at Rue Charles-Galland 2 and considered as the largest museum in Switzerland. The building was constructed sometime between 1903 and 1910 clearly reflecting the architecture during that time. This hundred-old museum houses as much as a million artworks. From time to time, certain artworks are placed on exhibit so visitors would learn more about art pieces. The museum is divided into three sectors, namely: Archeology, Applied Arts and Fine Arts. At that time I visited the museum, it showcased the 15th century altarpiece by Konrad Witz “ The Miraculous Draught of the Fish” which is the subject of this...
5 Pages(1250 words)Essay

...September 3, World Art I: Western Art Part One Throughout time different cultures use sculptures as symbols to communicate aspects of their religious beliefs and rituals. Two vastly different cultures from prehistoric times and times of the Ur and Babylonian Empires in the Middle East are being looked at in this analysis. Both cultures using the statues of the Venus of Willendorf and the Two Worshippers from the Square Temple of Eshnunna (now in modern day Tell Asmar in Iraq) show the human form to communicate their religious beliefs and rituals. The Venus of Willendorf, which has the reproductive and nursing parts of the female form exaggerated, allows us to believe that this statue...
2 Pages(500 words)Coursework

...Art Image The image for the advertisement of sanitary towel consisting of both male and female teen characters is pervasive. The reason main issue is on the product and its use rather than the figures used in the advert. Feminism and masculinity have been depicted in very many forms including in the image (Moore and Prain). The tendency to depict the female gender as the weaker sex is depicted in the image because male figures are added in the image. The issue of controversy is the inclusion of men in the advert and the connotations it adds to the image. To solve the problem, the male images added onto...
1 Pages(250 words)Essay

...festivals (Miller, 2004). The word nude brings pornography in mind. However, nude painting is a form of creativity in art while the nude photo has to do with pornography. The misconception brings confusion when artists display such creativity to the public. Nudity is an expression of art where the images (Lindquist, pp. 87) appear with or with little clothing that cover the private parts. Such images portray meanings that the public can relate to life events. This kind of art is very rampant in the Western art history. In the medieval art, the use of nude images was to...
5 Pages(1250 words)Essay

...proves his great art in painting by designing the real spaces in the drawing, the spaces in mirror, the spaces in picture and the artist style of picture within picture, give painting that is seen in the inclusion of the royal couple portrait behind the daughters picture, the pictures can be interpreted as one picture in one (Kleiner 401-403). This complexity in interpretation makes the painting get good score in masterpiece display. Conclusion The Diego Velazquez painting of the Maid of Honor is one of the greatest painting in the western art history, the artist uses the paint art to communicate several ideas in his painting. I agree and support the...
5 Pages(1250 words)Essay

...﻿Art History Questions One image that is considered Baroque is “Saint Peter’s Basilica” by Michaelangelo. Michaelangelo used exaggeration in the movement in order to create a painting that produced one of drama and splendor in the painting. Because it is located on the ceiling of the Sistine Chapel in the Vatican City, it is one that displays such grandeur. Also because if this, there is use of ornamentation that makes it another common piece that represents the Baroque art time frame in Europe. It also is one that is a grand vision and while it is brightly lit, the characters overlap and there is much going on in the painting that has an intense emotional appeal....
5 Pages(1250 words)Assignment
sponsored ads
Save Your Time for More Important Things
Let us write or edit the essay on your topic "Image read( a history of western art)" with a personal 20% discount.
GRAB THE BEST PAPER

Let us find you another Essay on topic Image read( a history of western art) for FREE!