Comments (0)
Add to wishlistDelete from wishlist
Cite this document
Summary
The nearby people perceived China as uncompromising and arrogant, and were not welcomed by these people. For example, in 2007 when concerns in many parts of the…
Download full paperFile format: .doc, available for editing
HIDE THIS PAPERGRAB THE BEST PAPER93% of users find it useful 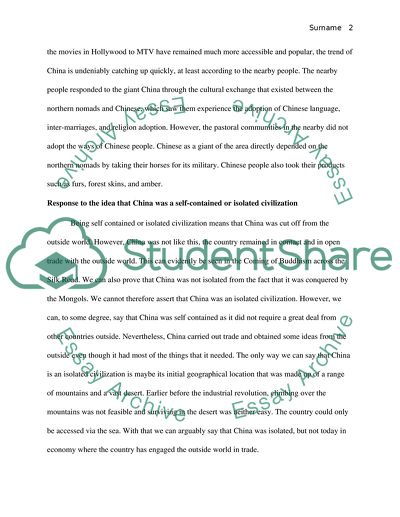 Extract of sample "History the world"

Sur Lecturer How nearby people experience the giant Chinese neighbor and respond to it The survival with the giant Chinese neighbor was very sensitive to the attitude of China towards the people nearby. The nearby people perceived China as uncompromising and arrogant, and were not welcomed by these people. For example, in 2007 when concerns in many parts of the world rose concerning the safety of products from China, officials from many South Asian nations were reportedly complained that the government of PRC was pressurizing them to avoid raising the issue, even after the imported products were found harmful. When these people made a ban decision for the sale of these Chinese unsafe items, the PRC government was reported to threaten and imposed retaliatory actions which resulted into consternation among the leaders of the area. These issues of controversy have remained as flashpoints between the Southeast Asia and China.
China made some relative gains to the United States in areas of political and cultural power. In a 2007 poll, only 27% of Malaysians and 27% of Indonesians had favorable view to the United States in contrary to the 65% of Indonesians and 83% of Malaysians who favored the views of China. Although the nearby people responded well in looking at China as the future leader of Asia, China has fared much worse than what the people expected in its soft power. China had its legal system, political system, normative appeal, and respect for human life score very low grades in the eyes of the Beijing nearby neighbors. Although the American culture form the movies in Hollywood to MTV have remained much more accessible and popular, the trend of China is undeniably catching up quickly, at least according to the nearby people. The nearby people responded to the giant China through the cultural exchange that existed between the northern nomads and Chinese, which saw them experience the adoption of Chinese language, inter-marriages, and religion adoption. However, the pastoral communities in the nearby did not adopt the ways of Chinese people. Chinese as a giant of the area directly depended on the northern nomads by taking their horses for its military. Chinese people also took their products such as furs, forest skins, and amber.
Response to the idea that China was a self-contained or isolated civilization
Being self contained or isolated civilization means that China was cut off from the outside world. However, China was not like this, the country remained in contact and in open trade with the outside world. This can evidently be seen in the Coming of Buddhism across the Silk Road. We can also prove that China was not isolated from the fact that it was conquered by the Mongols. We cannot therefore assert that China was an isolated civilization. However, we can, to some degree, say that China was self contained as it did not require a great deal from other countries outside. Nevertheless, China carried out trade and obtained some ideas from the outside even though it had most of the things that it needed. The only way we can say that China is an isolated civilization is maybe its initial geographical location that was made up of a range of mountains and a vast desert. Earlier before the industrial revolution, climbing over the mountains was not feasible and surviving in the desert was neither easy. The country could only be accessed via the sea. With that we can arguably say that China was isolated, but not today in economy where the country has engaged the outside world in trade.
However, according to Zhu (2010), China was isolated militarily and politically. This is due to the minimal military and political contacts with the nations in the middle east. Economically, China needed the foreign trade. The direct foreign investment shrinks in other Asian countries and broadly grows in China. This means that dollars are diverted to China from other Asian countries. The growth of China is presenting new economic opportunities to its neighbors. China is also seeking raw materials and minerals from its neighbors for the manufacturing sector; this is due to the proximity of the neighbors. We cannot therefore say that China is an isolated civilization due to these aspects of dependencies it has on the Asian region especially its neighbors.
Works Cited
Zhu, Zhiqun. Chinas New Diplomacy: Rationale, Strategies and Significance, Beijing: Ashgate
Publishing, Ltd., 2010 Read More
Share:
Tags
Cite this document
(“History the world Essay Example | Topics and Well Written Essays - 750 words - 4”, n.d.)
History the world Essay Example | Topics and Well Written Essays - 750 words - 4. Retrieved from https://studentshare.org/miscellaneous/1610494-history-the-world
(History the World Essay Example | Topics and Well Written Essays - 750 Words - 4)
History the World Essay Example | Topics and Well Written Essays - 750 Words - 4. https://studentshare.org/miscellaneous/1610494-history-the-world.
“History the World Essay Example | Topics and Well Written Essays - 750 Words - 4”, n.d. https://studentshare.org/miscellaneous/1610494-history-the-world.
Comments (0)
Click to create a comment or rate a document

CHECK THESE SAMPLES OF History the world

Code of Ethics for Engineers

Investment strategy for the Brighton office

1 Pages(250 words)Essay
sponsored ads
Save Your Time for More Important Things
Let us write or edit the essay on your topic "History the world" with a personal 20% discount.
GRAB THE BEST PAPER

Let us find you another Essay on topic History the world for FREE!