Comments (0)
Add to wishlistDelete from wishlist
Cite this document
Summary
Multitudes of innocents have perished due to Islamic extremists, who have exploited the conflict to establish their presence in Syria. The country is bordering on the abyss of…
Download full paperFile format: .doc, available for editing
HIDE THIS PAPERGRAB THE BEST PAPER91.5% of users find it useful 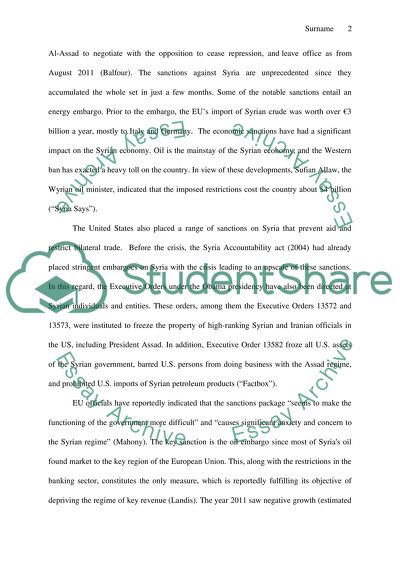 Syrian conflict The civil war in Syria has become a humanitarian and political catastrophe for the Middle East nation. Multitudes of innocents have perished due to Islamic extremists, who have exploited the conflict to establish their presence in Syria. The country is bordering on the abyss of disintegration into ethno-religious regions. The war also represents a brutal Sunni-Shiite regional power struggle between Saudi Arabia and Turkey, on one side and Iran on the other side. All of those aspects have received a fair amount of attention in the West. Syrias civil war continued late into 2012, renewed efforts by the international community to ease the suffering, notwithstanding. The Assad regime, as well as the rebel forces, violated an otherwise, failed UN - backed cease-fire, led by the former Secretary-General of the United Nations, Koffi Anan, in late October. The fighting has heightened in neighbouring Lebanon, home to Iran-backed Hezbollah, and prompted cross-border shelling between Syria and Turkey. The unrest also proved to be an attraction for global jihadists like the al-Qaeda-linked groups, fighting for the formation of an Islamist state (Landis 75).
Following the Syrian civil war, the Arab League acted swiftly and immediately suspended Syrian membership to the organization, In addition, the league imposed imposed stringent economic embargos in November 2011(Masters). Despite the lack of support from Syria’s friendly nations like Russia, the sanctions have had a noticeable economic impact. The European Union sanctions have also served to redefine partnerships with other powers, both globally and in the Middle East. The EU, supported by the US sanctions, initially asked Al-Assad to negotiate with the opposition to cease repression, and leave office as from August 2011 (Balfour). The sanctions against Syria are unprecedented since they accumulated the whole set in just a few months. Some of the notable sanctions entail an energy embargo. Prior to the embargo, the EU’s import of Syrian crude was worth over €3 billion a year, mostly to Italy and Germany. The economic sanctions have had a significant impact on the Syrian economy. Oil is the mainstay of the Syrian economy, and the Western ban has exacted a heavy toll on the country. In view of these developments, Sufian Allaw, the Wyrian oil minister, indicated that the imposed restrictions cost the country about $4 billion (“Syria Says”).
The United States also placed a range of sanctions on Syria that prevent aid and restrict bilateral trade. Before the crisis, the Syria Accountability act (2004) had already placed stringent embargoes on Syria with the crisis leading to an upscale of these sanctions. In this regard, the Executive Orders under the Obama presidency have also been directed at Syrian individuals and entities. These orders, among them the Executive Orders 13572 and 13573, were instituted to freeze the property of high-ranking Syrian and Iranian officials in the US, including President Assad. In addition, Executive Order 13582 froze all U.S. assets of the Syrian government, barred U.S. persons from doing business with the Assad regime, and prohibited U.S. imports of Syrian petroleum products (“Factbox”).
EU officials have reportedly indicated that the sanctions package “seems to make the functioning of the government more difficult” and “causes significant anxiety and concern to the Syrian regime” (Mahony). The key sanction is the oil embargo since most of Syrias oil found market to the key region of the European Union. This, along with the restrictions in the banking sector, constitutes the only measure, which is reportedly fulfilling its objective of depriving the regime of key revenue (Landis). The year 2011 saw negative growth (estimated at - 2%), and with the decrease in tax and tourism revenues, as well as oil, the fiscal deficit should increase to 11%, attributable to conflict and the international sanctions, according to the EIB. The GDP reportedly contracted by 3.4% during 2011, according to the Economist Intelligence Unit.
Based on the foregoing, the inability of the Syrian government to solve this conflict has led to sanctions on the country, the government, and individual leaders. Nonetheless, the Syrian economy has greatly suffered the effects of this crisis. In addition, the humanitarian crisis has made governments and various organizations in the world respond differently with an aim of seeing this crisis end.
Works Cited
Balfour, Rosa. EU Conditionality after the Arab Spring. EIMed: Barcelona. 2012. Print.
“FACTBOX-Sanctions imposed on Syria.” AlertNet. 2 Dec. 2011. Web. 19 Nov. 2012.
.
Landis, Joshua. The Syrian Uprising of 2011: Why the Assad Regime is likely to
survive to 2013. Middle East Policy 19.1 (2012): 72-84. Print.
Mahony, Honor. EU Ministers set to beef up Syria arms embargo. EU Observer. 20 July
2012. Web. 19 Nov. 2012. .
Masters, Johnson. What you need to Know about the Syrian Crisis. nbcnews. 25 Jul. 2012.
Web. 19 Nov. 2012. .
“Syria Says sanctions have cost country $4B.” CBS News. 23 May 2012. Web. 19 Nov.
2012. . Read More
Share:
Tags
Cite this document
(“Economic Essay Example | Topics and Well Written Essays - 500 words - 6”, n.d.)
Retrieved from https://studentshare.org/miscellaneous/1608916-economic

CHECK THESE SAMPLES OF Economic

...?Economics 513569 What is the main issue presented in the media report? Discuss what has actually happened Highlight the reason for the issue being raised Outline what possible impacts this change could have A classic supply and demand scenario is emerging as housing stocks increase while fewer buyers seem to be interested in actually closing on a home. With fewer buyers willing to actually purchase new or existing homes, the new homes being added to the market will certainly cause prices to go down over the aggregate. Much like the US market, the larger urban areas will see larger concentrations of stalled and long-term homes in the inventory and the trend will continue to increase the numbers in the inventory according...
4 Pages(1000 words)Essay

...?Economic Analysis of “Australia's jobless rate envy of world, Treasurer Wayne Swan says” (Brinsden Introduction Australia continues to havea low jobless rate and is quite happy to crow about it in the Western world. One can look at this and try to examine how Australia is getting it right while the rest of the Western world is wallowing through a recession and what some may term a depression. At the Australian Chamber of Commerce and Industry (ACCI), “Mr. Evans said higher interest rates, a stronger Australian dollar, subdued levels of household spending and high international oil prices were all affecting business confidence in the non-mining sectors.” This demonstrates quite ably that macroeconomic tinkering must always strike... a...
5 Pages(1250 words)Essay

...?Economic Table of Contents 0 Introduction 3 The next section talks about the economic rationale which drives firms comprising the banking sector to build an oligopolistic market framework; there are special references to empirical evidences from different nations in this regard as well. The third section is an illustration of the implication that an oligopolistic banking sector is likely to have over the residents of a nation. The fourth section depicts the situation in Australia where nationals have been immensely protesting against the oligopolistic banking sector and finally the last section summarises the contents of the entire paper. 3 2.0 Economic Rationale behind Oligopolistic Behaviour in Banking Sector 4 3.0 Implications... ...
10 Pages(2500 words)Essay

...?Economics Article: RBA raises inflation forecast as traders raise rate expectations Summary Monetary policy of any country plays a key role with regard to bringing about economic reforms. The key objectives the policy makers, is to ensure that the economy runs successfully and inflation is controlled at all costs. The basic underlying factor behind the formation and implementation of the policy is to ensure that money itself doesn't act as a tool of economic disturbance. This article highlights various key issues faced by Australia in recent times, and helps in understanding the manner in which the central bank's commitment to price stability helps in maintaining a desired a level of...
6 Pages(1500 words)Essay

...?Running Head: UNEMPLOYMENT IN THE UK Introduction Unemployment is a term used by economists to describe a situation in an economy where there is labour force that has not yet been absorbed in the work market. Unemployment rate therefore measures the percentage of individuals in the labour force who are not able to secure jobs. It is measured using the formula given below; Unemployment = number of people unemployed/ number of people in the labour force*100 This is an economics study set out to understand the issue of unemployment in detail. More particularly it will consider the case of the UK and to that it will answer the study questions, “What are the downsides of unemployment in the UK? How does unemployment affect...
2 Pages(500 words)Essay

...economy are to be found in the iron ore industry, while in excess of 80% of the whole number of supplementary jobs are anticipated to be created in other industries, in particular the service industries. This depicts that the economic consequences of the elaboration of iron ore exports and new iron ore projects are very wide (Gregory, 1976). Labour mobility In the long run will ensue in models of net interstate migration changing over to privilege the comparatively resource-dependent States, cutting down inequalities in unemployment rates and wage rates between the States. The supply States would also draw investment from the remainder of the country. Put differently, enduringly advanced commodity prices are probable to...
5 Pages(1250 words)Essay

...?Microeconomics_200_assignment a) Introduction During the past few years, Western Australia’s resources area particularly the mining sector proceededto relish particular considerations produced by tough international demand for commodities. This assignment aims to test the impact of this commodity boom particularly the iron ore resources explosion, on the economy of Western Australia.1 The iron ore industry is currently the major individual commodity division in Western Australia by measure and represents a key role in the State’s export-driven economic system. In 2005, the iron ore industry reported for 29% of overall value of minerals and petroleum sales, up from 22% in 2004. Repelled by Chinese demand, iron ore gross...
6 Pages(1500 words)Essay

... work If a price for an inferior good changes the substitution effect and the income effect work in the opposite directions. The resulted outcome cannot be defined in general case – the consumption may stay the same (in case of vertical demand curve), decrease or increase depending on the latitude of shift in consumption determined by each of the two effects. For instance an increase in price of certain inferior good X will lead to: Replacing good X by consumption of other goods (substitution effect); Decrease of income expressed in terms of quantity of good X which leads to consumption of more of X (income effect for inferior goods). The ultimate result may be as follows: If the change caused by the income effect is greater than...
2 Pages(500 words)Essay

...Underdeveloped Countries Introduction To be underdeveloped is to not reach the maximum maturity level. Usually, it is the ‘economic underdevelopment’that becomes a critical problem. It includes lack of health care, food, shelter, education, employment opportunities and even drinkable water. This means that underdeveloped countries do not have the basic crucial necessities of human life let alone resources for progress. The main sign of an underdeveloped country is that the resources available are not being exploited to their maximum socio-economic potential. There is a major disparity between the income levels in such countries – people are either too rich or just too poor. Some basic examples of...
4 Pages(1000 words)Essay
sponsored ads
Save Your Time for More Important Things
Let us write or edit the essay on your topic "Economic" with a personal 20% discount.
GRAB THE BEST PAPER

Let us find you another Essay on topic Economic for FREE!