Comments (0)
Add to wishlistDelete from wishlist
Cite this document
Summary
I think I would go on recommending the third option: building a mirror site from the current development files and try to run it as efficiently as possible before shutting down the original production systems. As disclosed, this option would not necessitate shutting down…
Download full paperFile format: .doc, available for editing
HIDE THIS PAPERGRAB THE BEST PAPER94.2% of users find it useful 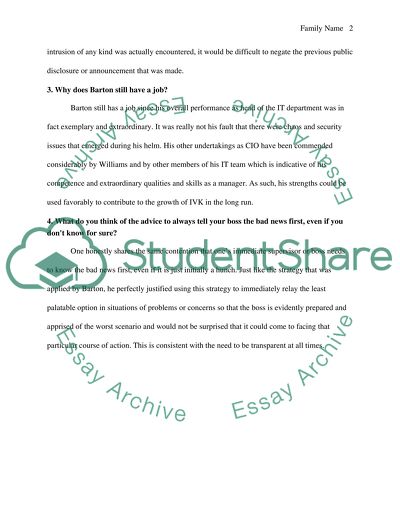 Chapter 11: Adventures of an IT Leader Which option to secure IVK would you recommend? I think I would go on recommending the third option: building a mirror site from the current development files and try to run it as efficiently as possible before shutting down the original production systems. As disclosed, this option would not necessitate shutting down critical operating systems of IVK; nor the need to explain why they are shutting down the system. Although this would take a longer time frame than shutting down IVK for about three or four days, at least it is a more subtle strategy and would not endanger the corporate image of IVK. The downside of this option is its cost. But at least, it would not jeopardize the whole credibility and viability of the business on a longer term framework. Besides, by shutting down the system, and trying to rush things into putting back normal operations within 3 or 4 days, the more that IT personnel might increase tendencies to commit mistakes and gravely endanger rushing the system back into full operations within a short time frame.
2. What would you disclose to the outside world? What are the implications of such disclosure?
One strongly believes that there is no need to disclose anything in the outside world given that IT personnel has not proven any form of intrusion, in the first place. The implications for making such a pre-emptive public announcement could cause chaos and undue stress to their customers which could actually compromise their corporate image. If eventually proven that no intrusion of any kind was actually encountered, it would be difficult to negate the previous public disclosure or announcement that was made.
3. Why does Barton still have a job?
Barton still has a job since his overall performance as head of the IT department was in fact exemplary and extraordinary. It was really not his fault that there were chaos and security issues that emerged during his helm. His other undertakings as CIO have been commended considerably by Williams and by other members of his IT team which is indicative of his competence and extraordinary qualities and skills as a manager. As such, his strengths could be used favorably to contribute to the growth of IVK in the long run.
4. What do you think of the advice to always tell your boss the bad news first, even if you dont know for sure?
One honestly shares the same contention that one’s immediate supervisor or boss needs to know the bad news first, even if it is just initially a hunch. Just like the strategy that was applied by Barton, he perfectly justified using this strategy to immediately relay the least palatable option in situations of problems or concerns so that the boss is evidently prepared and apprised of the worst scenario and would not be surprised that it could come to facing that particular course of action. This is consistent with the need to be transparent at all times.
Work Cited
Austin, Robert D., Richard L. Nolan and Shannon ODonnell. Adventures of an IT Leader. Harvard Business School Publishing Corporation, 2009. Print. Read More
Share:
Tags
Cite this document
(“CH 11 - ISMG 3000 Essay Example | Topics and Well Written Essays - 500 words”, n.d.)
CH 11 - ISMG 3000 Essay Example | Topics and Well Written Essays - 500 words. Retrieved from https://studentshare.org/miscellaneous/1607173-ch-11-ismg-3000

...Debbie was just an expert in making cookies when she had met Randy. She had loved baking and perfected her recipe for cookies which were hugely like by friends and relative. She had also served in a departmental store and gained experience of sales and importance of customer relationship management. Randy was a Stanford University graduate and a successful economist. He was well qualified and experienced to understand the complexities of running a business. He also had the expertise and necessary skills for starting a business and develop appropriate corporate structure to make it a viable venture. Debbi’s passionate zeal for baking and Randy’s business sense was complementary for starting a successful business. Hence, Debbi... was just an...
7 Pages(1750 words)Essay

... Information System Portfolio Application for MDCM The project case The project at Medical Device Contract Manufacturing (MDCM) Inc, relates to Application Portfolio Management. Business needs as determined by ongoing and planned organizational projects have constant demands for better and improved system functionalities in the business application and subsequent integration of the developed applications. Currently, organizational information business tools are missing in application details as well as application portfolio and defines strategies for a future business portfolio. Within this paradigm, the current business situation creates problems that are essential in analysis and design of specific tailored solutions to meet... Information...
3 Pages(750 words)Essay

...ISMG 11 Question Digital lock mechanisms can replace traditional keys or techniques with a digital combination, finger print, and retina scan or employee identification card (Austin, Nolan and ODonnell 180). Systems with passwords or keycards can be centrally monitored and controlled, and they are handier than traditional keys and locks. With more workers taking company equipment and tools home, there is a greater possibility that some tools can go missing. Therefore, IVK could install tracking software, which will help them locate and reclaim these devices when they get lost (Austin, Nolan and ODonnell 180). Laptops or PCs and other technology equipments are among some of the most frequently stolen...
2 Pages(500 words)Essay

...1. What does the consultant’s report tell us about Davies’ firing and Barton’s hiring? The first thing that must be d is that the consultant’s report targets Davies’ ability to lead due to his inability to delegate responsibility to the appropriate entities. This served as a type of micromanagement that had little if any foresight with regards to seeking to enable shareholder participation and/or buy in. As a function of this, the level to which the parts of the organization, inclusive of IT, cooperated, integrated, and communicated were greatly weakened; therefore reducing the overall effectiveness that Davies could have upon the overall direction of the organization. Conversely, Barton himself was hired as a function... What does the...
3 Pages(750 words)Essay

... 14th March The Adventure of an IT Leader An end-of-chapter question asks you to take sides in the debate between Huerta and Calder. Ill suggest that it may not be so simple. Is it possible that each can be "right" under certain circumstances? If so, under what circumstances? It is not easy to decide who between Huerta or Calder is right. Calder says that the system described by Huerta is a waste of time. They have been spending a lot of time on the system but the system does not work. However Huerta says that there is lack of discipline in the project management process which is causing failure. Both of them may be right from their own perspective. It may be that the system can work with proper management or there may be need... 14th March...
4 Pages(1000 words)Essay

With reference to Bourdieus theory of distinction and other relevant theorists on social class, give a detailed example of how a specific habitus shapes consumer behaviour

... E-business Strategies A is an important person in any business. As result efforts should be made to ensure thattheir need are well met. In response to the customer complaining about children, I will give him my personal email so that we engage into details. Such private and detailed conversation with him will enable me to understand the reason he hates children and how he or she feels we can handle that. I will tell him that the management will work to separate children from adults soon to cater for his grievances. Instead of banning children from the cafe, the management will set aside children lodge. In this way, both parents and children will be in the cafe but separate lodges. With customer ethics, the client is not ethical...
2 Pages(500 words)Assignment
sponsored ads
Save Your Time for More Important Things
Let us write or edit the essay on your topic "CH 11 - ISMG 3000" with a personal 20% discount.
GRAB THE BEST PAPER