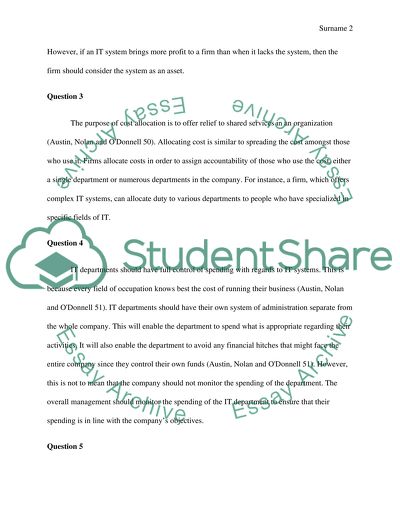 Ismg 4 Question It is costly to meet the expenses needed to run an IT business. Even though, a company can determine the cost of running an IT department, firms shy away from noting the actual price of running an IT department. This is because running an IT business is extremely expensive and requires a lot of effort (Austin, Nolan and ODonnell 49). Companies tend to look at the advantages that are brought about by IT departments forgetting its disadvantages. This is because the cost is so high that it can make them consider cutting their spending on IT.
Question 2
Running IT systems requires a lot of resources. The question whether IT systems is an expense or an asset depends on the business being operated (Austin, Nolan and ODonnell 49). Some businesses need IT systems to help them in running their operations. However, some businesses can do well without IT systems. If IT systems lead to the high cost of a business, then the business should consider the systems as expenses (Austin, Nolan and ODonnell 50). However, if an IT system brings more profit to a firm than when it lacks the system, then the firm should consider the system as an asset.
Question 3
The purpose of cost allocation is to offer relief to shared services in an organization (Austin, Nolan and ODonnell 50). Allocating cost is similar to spreading the cost amongst those who use it. Firms allocate costs in order to assign accountability of those who use the cost, either a single department or numerous departments in the company. For instance, a firm, which offers complex IT systems, can allocate duty to various departments to people who have specialized in specific fields of IT.
Question 4
IT departments should have full control of spending with regards to IT systems. This is because every field of occupation knows best the cost of running their business (Austin, Nolan and ODonnell 51). IT departments should have their own system of administration separate from the whole company. This will enable the department to spend what is appropriate regarding their activities. It will also enable the department to avoid any financial hitches that might face the entire company since they control their own funds (Austin, Nolan and ODonnell 51). However, this is not to mean that the company should not monitor the spending of the department. The overall management should monitor the spending of the IT department to ensure that their spending is in line with the company’s objectives.
Question 5
There should be a percentage cost that an IT department can spend on the maintenance of their IT systems, and this should also be in line with a department’s spending (Austin, Nolan and ODonnell 50). If the cost of maintenance is lesser than the original price of the system, and it does not eat much into the operations of the company, then it is essential to keep on with the maintenance of the systems. However, when the cost of maintenance exceeds the cost of operation and eats into the operations of the business, the firm should consider doing away with the system.
Question 6
Generalizing the cost of spending with regards to the type of company being considered is an excellent idea (Austin, Nolan and ODonnell 52). A company with complex operations should incorporate expensive systems, which will enable the company to do its operations well. However, a small firm can also spend little on IT systems due to its reduced processes.
Work Cited
Austin, Robert, Nolan, Richard and ODonnell, Shannon. The Adventures of an IT Leader. New York: Harvard Business Press, 2009. Print. Read More
Share:
Tags
Cite this document
(“Ismg 4 Essay Example | Topics and Well Written Essays - 500 words”, n.d.)
Ismg 4 Essay Example | Topics and Well Written Essays - 500 words. Retrieved from https://studentshare.org/miscellaneous/1603536-ismg-4

CHECK THESE SAMPLES OF Ismg 4

...implementation. 4. During the Christmas of 2010, a local events organizing company decided to organize a Christmas festival for the local people. It contracted local people to provide labor and logistics, comprising of teenagers and young adults. Being a festival, there were a number of events happening, from games to thrill rides, food, children and adult fun activities. The period was a holiday, and I decided to earn some form of income by offering labor services. Three others and I were required to decorate the entire area, seats and walkways. Constrained with time, we worked so hard. We were expected to report our progress to a supervisor. In some instances, especially when we felt overwhelmed by the amount of work,...
3 Pages(750 words)Essay

... Can Barton restore confidence in the IT department in the rest of the firm? How? Barton is the right person to fix the problem that is prevailing in his company after the attack that led to the loss of important files which might compromise the confidentiality of their clients. First of all, this gentleman is confident in himself and in what he contributes during the executive meeting with the CEO. He also has vast knowledge and experience as pertains to every aspect that revolves in the IT department and apparently, he is also aware of how other departments operate such as the loan department. His rapport with Williams is also outstanding and the kind of ideas he gives him during the meeting is a clear indication that he is one... Can...
3 Pages(750 words)Essay

...?ISMG How would you respond to Bernie Ruben's 3 questions about emerging technologies? In regards to what we should do about the blog entry, I would tell Bernie Ruben that we should not pay too much attention to the blog entry. The reason is that if we take drastic action then it may reflect badly on the company for overreacting. However, Juvvani's suggestion that we do nothing is also not ideal because the problem may perpetuate itself further. I would side with Barton in that we should place a restriction policy on blogging that makes it clear what content is not to be published. For the second question, I would tell Bernie Ruben that we should treat blogging about inside information like any other form of...
3 Pages(750 words)Essay

... Adventures of an IT Leader Chapter 15 With Ivan Korsky having a combination of unique talents, and being a better performer than most of the employees in the organization, particularly in the programming and designing assignments, he remains a very important element to IVK. Loosing such a resource to a start company would mean total loss to IVK. If the firm were to operate in the similar field as IVK, then it would mean he would leave with his skills, thus posing a threat to the organization. Gordon, with full knowledge of this, is extremely worried that Ivan Korsky would leave someday. Big organizations preying on him might decide to give him a deal that he cannot turn down, thus leaving the organization. Subsequently... Adventures of an IT ...
3 Pages(750 words)Essay

...ISMG Initial actions taken by Fields upon acquiring LPB According to the Investor Glossary , “an acquisition takes place when one corporation takes over controlling interest of another.” This means that with acquisition there is the absolute ownership of the company that is bought. It was not surprising therefore that Mrs. Field decided to manipulate several components of the new company, which was La Petite Boulangerie. The first significant action taken by Mrs. Field was the reduction of the number of staff on the acquired company from fifty three to just three. Mrs. Field therefore had to work with fewer employees and managers in the new ‘twin’ company than she was likely to work with if she kept all the staff of the...
6 Pages(1500 words)Essay

...Case Study for Alcan Desired IT Governance Model at Alcan The present most desired IT governance model at Alcan is the new capability enabler model.This model is selected based on the description that Accenture IT governance model gives to the various models in relation to the kind of business that exists at Alcan. It is known that Alcan is a huge company that deals primarily in metal works and minerals. These two areas of business are subject to factors that cause rapid changes to the way that business is run in the company. In the models also, it can be seen that there are only two models that fit companies with faster rates of change. These are the responsive solution providers and new capability enablers. At Alcan, the rapid... Study for...
4 Pages(1000 words)Essay

..., the making of the system involved the users greatly. What is more, there was the hope to evolve from the prototype to a working system in the long run. 4.Why did Hrad Technika, the firm that performed the requirements analysis, have scope and requirements problems once the project commenced? There were problems with the scope and requirements once the project commenced because there were no personnel at Tegan with the competency critically reviewing the low level design documents (LLD) that were sent to Tegan by the Hrad team for review. Due to the absence of such expertise, it was extremely difficult that the low level design document (LLD) would get back to the developers on time for them to proceed with the...
4 Pages(1000 words)Essay

...ISMG Table of Contents Table of Contents 2 Question 3 Question 2 3 Question 3 4 Question 4 5 Question 5 5 Question 6 6 Question 7 7 Question 8 7 Question 9 8 Question 10 8 Question 11 9 Question 12 9 Works Cited 11 Bibliography 12 Question 1 Debbi Sivyer Fields was a teenager, when she started her career with baking cookies. At the age of 19, she married Randy Fields, an economist and a graduate of Stanford University. At that time, they were at the starting point of their career with no specific notions. The event of marriage acted as the boon or inspiration for the couple and provided an opportunity to highlight the inherent talent. The talent of baking excellent and delicious cookies...
7 Pages(1750 words)Essay

... Sunsweet Growers Supply Chain Sunsweet Inc. is a company that deals with dried fruits and targets the global market and is a leading global seller. With the high number of customers the company must ensure that it maintains its supply chain accordingly to ensure customer satisfaction while also ensuring the right level of stock for the changing seasons. The product like many others has seasonal changes and shifts and sees high demand during Christmas and other holidays celebrated all over the world. Although most companies face either the problem of demand or supply Sunsweet Inc. faces both problems since both supply and demand are out of the company’s control. The supply is controlled by the weather while the demand... Sunsweet Growers...
2 Pages(500 words)Essay
sponsored ads
Save Your Time for More Important Things
Let us write or edit the essay on your topic "Ismg 4" with a personal 20% discount.
GRAB THE BEST PAPER

Let us find you another Essay on topic Ismg 4 for FREE!