Comments (0)
Add to wishlistDelete from wishlist
Cite this document
Summary
The earlobe never contains the cartilage and contains a great amount of blood which could play a significant role in maintaining body…
Download full paperFile format: .doc, available for editing
HIDE THIS PAPERGRAB THE BEST PAPER91.9% of users find it useful 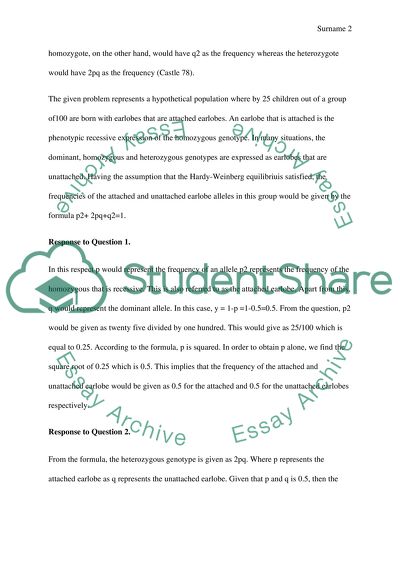 Anthropology1020 Human Origin Evol/Diver. A typical earlobe of humans consists of an adipose tissue that is connected, an areolar, pinna elasticity, and the firmness lack (Castle 34). The earlobe never contains the cartilage and contains a great amount of blood which could play a significant role in maintaining body balance and warming of the ears. In many instances, earlobes are normally considered as key biological functions. Additionally, an earlobe has some nerve endings and a zone that is erogenous in some other individuals (Castle 56). A Hardy-Weinberg equilibrium principle argues out that the genotype and allele frequencies within a population should always remain constant. This means that all these would always be in equilibrium. In many situations, this would occur from one generation to another until an influence that is disturbing is introduced. In this regard, the disturbing influences are mating that is not random, selection, genetic drift that is random, mutation, meiotic drive, and gene flow. It is always crucial to get to know that in actual populations, more than one of the influences that are disturbing is always in effect. This implies that this principle is a state that is ideal and gives out a baseline for analyzing change. In a population, a static allele would always assume no emigration or migration, no mutation, selected genotype pressure, and infinite size of population. For instance, a simple situation of a unit locus having two alleles (dominant and recessive), their frequencies would be denoted by p and q. In this regard, the frequency of the first would be represented as p+ q=1. Whenever mating is random the new outcome will have p2 as the frequency, the homozygote, on the other hand, would have q2 as the frequency whereas the heterozygote would have 2pq as the frequency (Castle 78).
The given problem represents a hypothetical population where by 25 children out of a group of100 are born with earlobes that are attached earlobes. An earlobe that is attached is the phenotypic recessive expression of the homozygous genotype. In many situations, the dominant, homozygous and heterozygous genotypes are expressed as earlobes that are unattached. Having the assumption that the Hardy-Weinberg equilibriuis satisfied, the frequencies of the attached and unattached earlobe alleles in this group would be given by the formula p2+ 2pq+q2=1.
Response to Question 1.
In this respect p would represent the frequency of an allele p2 represents the frequency of the homozygous that is recessive. This is also referred to as the attached earlobe. Apart from this, q would represent the dominant allele. In this case, y = 1-p =1-0.5=0.5. From the question, p2 would be given as twenty five divided by one hundred. This would give as 25/100 which is equal to 0.25. According to the formula, p is squared. In order to obtain p alone, we find the square root of 0.25 which is 0.5. This implies that the frequency of the attached and unattached earlobe would be given as 0.5 for the attached and 0.5 for the unattached earlobes respectively.
Response to Question 2.
From the formula, the heterozygous genotype is given as 2pq. Where p represents the attached earlobe as q represents the unattached earlobe. Given that p and q is 0.5, then the heterozygous genotype would be given as 2 x 0.5 x 0.5. This would give 0.5 as the heterozygous genotypes frequency.
In order to establish the dominant phenotype’s frequency, we calculate the square of q (q2). This would be o.5 x 0.5 = 0.25. Therefore, this frequency would be given as 0.25.
Response to Question 3.
In this population, the genotypic frequency would be obtained after a single mating generation within the given population. This is due to the increased homozygosis frequency for all the genes that may have come about due to inbreeding or an effect of a non random mating. In this case, this population would have the proportions of the Hardy-Weinberg in each generation but the frequency of the allele would keep on changing over time.
Work Cited
Castle, Eve. Laws governing race improvement. American. Academic. Journal of Science., 35: 233–242.2008. Read More
Share:
Tags
Cite this document
(“Anthropology1020 Human Origin Evol/Diver Essay Example | Topics and Well Written Essays - 500 words”, n.d.)
Retrieved from https://studentshare.org/miscellaneous/1603402-anthropology1020-human-origin-evoldiver

...to the famous horses of Arab but also playing a pun on the word calling him a barbarian and a savage. There is likelihood that he did not belong to any of the categories and was simply a black African. This paper will trace Othello’s origin to show that he was not a native of Venice. Bradley, in his book on Shakespeare’s Tragedies, states that the evidence about Othello’s origins is “indecisive” (Bradley 2007). Features in Shakespeare’s portrayal of Othello seem to have been strained from all of the blacks who may have been in England during his time (Braxton 1990). To the Elizabethan mind, black was the color of the skin which depicted the Otherness of a person who had satanic predisposition and sexual...
4 Pages(1000 words)Essay

...million, compared to €11.63 million for the first half ended January 31, 2011 (Origin enterprises, 2011, p.2). Different Issues of Origin Enterprise Plc (Ethical, Social and Environmental) The company believes in social responsibility and corporate governance and is directly involved in improving environmental business so as to make it environmental friendly. The company follows ethical working methods to safeguard and support their right. The company strictly maintains corporate governance practices as a part of business ethics i.e. the company follows certain process, customs, policies and laws which deals with the stakeholders’ interest. The quality has been maintained by the company on producing...
5 Pages(1250 words)Assignment

...Origin of Sin: A Comparison between Christian and Scientific Views Dr. Baldwin THESIS: This paper is going to look at the different views that surround the question of the origin of sin in the universe. The writer will compare and contrast two views; the scientific and Christian view on the origin of sin. OUTLINE I. Introduction II. Augustine/Christian Views on Origin of Evil III. Scientists' Views on Origin of Evil IV. Conclusion Introduction Origin is one issue that has preoccupied many people in the world. It is human nature to try and explain almost everything that surrounds him. One...
6 Pages(1500 words)Thesis

...Anthropology" Describe the Huntington’s disease (HD), its prevalence and its relation to the genetics we have been discussing in the and discuss why it is important to non-medical professionals such as anthropologists. Huntington’s disease (HD) is an insidious disorder caused by an autosomal dominant mutation, which has a prevalence rate of one in 10,000 individuals of European descents. Individuals with HD undergo progressive degeneration of central nervous system, usually beginning at an early age of 30 to 50 years and terminating in death in 10 to 15 years later. HD is untreatable. However, the identification of the gene and the mutational defect responsible for HD has kindled hope for an effective treatment in future... Describe the...
2 Pages(500 words)Essay

... Anthropology1020: Human Origin Evol/Diver Social mammals have some basic stages that are common to all. Man and his closest relatives have common features of post natal development; infant, juvenile and adult. The human life cycle can best be described through five stages; infant child, juvenile, adolescent and adult. The current human pattern is that of the Homo erectus. Expelling the life cycle stages of human beings has been a subject of concentration in recent times by anthropologists. This is down to the fact that the human lifecycle stands in contrast with other species including primates. Infancy in human beings is arranged of life that lasts between birth and one year of age. It is at this point that the baby has exited... turning...
2 Pages(500 words)Essay

...and computer services, largely deviating from its original business of producing personal computers. This shift to business technology accorded the company a very strong enterprise presence. However, the shift in technological innovation, with the onset of handheld devices, IBM will seek to use Apple’s strong technological innovation and background to provide its clients with specialized technological solutions (Preimesberger, 2014). The company seeks to provide the enterprise clientele with the best technological solutions, a facet that is guaranteed with the vast technological solutions that Apple has. This would ensure that the company will considerably mitigate and eventually eliminate the level of declining income...
4 Pages(1000 words)Essay
sponsored ads
Save Your Time for More Important Things
Let us write or edit the essay on your topic "Anthropology1020 Human Origin Evol/Diver" with a personal 20% discount.
GRAB THE BEST PAPER

Let us find you another Essay on topic Anthropology1020 Human Origin Evol/Diver for FREE!