Comments (0)
Add to wishlistDelete from wishlist
Cite this document
Summary
Due to his overweight John’s doctor advised him to do aerobic exercises daily in the morning and evening. Mary always went to the gym with John so as to give him moral…
Download full paperFile format: .doc, available for editing
HIDE THIS PAPERGRAB THE BEST PAPER95.1% of users find it useful 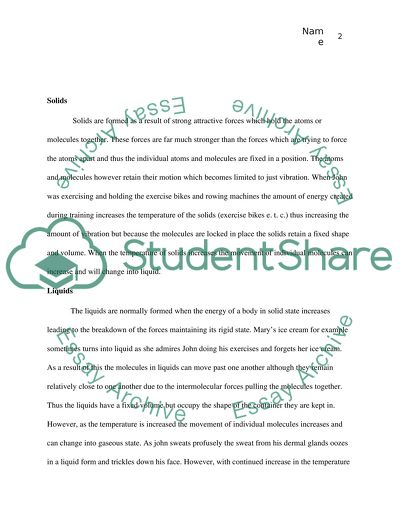 Supervisor s of matter and phase changes John was a hardworking pot bellied businessman with a very pretty wife called Mary who loved chocolate. Due to his overweight John’s doctor advised him to do aerobic exercises daily in the morning and evening. Mary always went to the gym with John so as to give him moral support during his exercises. She noticed that after approximately ten minutes of exercise John would pant and sweat profusely. As a lover of chocolate Mary used to enjoy her delicacy of chocolate during John’s exercises. At the end of the thirty minutes of training John would have a lot of salt accumulation on his skin.
From this simple story we can see the different states of matter obtained and the different phase changes which occur to matter. Matter is anything that occupies space and has a mass. Matter exists in different states which include: solids, liquids, gases, plasmas and Bose-Einstein condensates. According to the kinetic theory of matter, all matter is made of atoms or molecules which have a motion energy which we perceive as temperature. Atoms and molecules are constantly in motion and the more the energy the matter has the more the molecular movement and consequently a higher temperature. The amount of energy in atoms and molecules influences the intermolecular forces holding them such as hydrogen bonds and van der Waals forces and thus the state of matter of a substance.
Solids
Solids are formed as a result of strong attractive forces which hold the atoms or molecules together. These forces are far much stronger than the forces which are trying to force the atoms apart and thus the individual atoms and molecules are fixed in a position. The atoms and molecules however retain their motion which becomes limited to just vibration. When John was exercising and holding the exercise bikes and rowing machines the amount of energy created during training increases the temperature of the solids (exercise bikes e. t. c.) thus increasing the amount of vibration but because the molecules are locked in place the solids retain a fixed shape and volume. When the temperature of solids increases the movement of individual molecules can increase and will change into liquid.
Liquids
The liquids are normally formed when the energy of a body in solid state increases leading to the breakdown of the forces maintaining its rigid state. Mary’s ice cream for example sometimes turns into liquid as she admires John doing his exercises and forgets her ice cream.
As a result of this the molecules in liquids can move past one another although they remain relatively close to one another due to the intermolecular forces pulling the molecules together. Thus the liquids have a fixed volume but occupy the shape of the container they are kept in. However, as the temperature is increased the movement of individual molecules increases and can change into gaseous state. As john sweats profusely the sweat from his dermal glands oozes in a liquid form and trickles down his face. However, with continued increase in the temperature due to John’s exercises the sweat evaporates from his face and body surface leaving the salts excreted together with sweat remaining on his body surface.
Gases
They are formed when the energy in the liquids exceeds the attractive forces thus the gases move quickly and in any direction thus expand to fill the container they are held in but can be compressed easily. The water vapor from John’s sweat moves in any direction.
Other matter states
Plasmas are hot, ionized atoms of gases which form when molecules are broken down in extreme temperatures. Atoms in the sun for example exist in the plasma state. Bose-Einstein Condensates are gaseous superfluids which occur when the temperature of a substance approaches the absolute zero thus the atoms can flow past one another without friction.
.
Work Cited
Carp Anthony. “Matter: States of matter”. Vision learning. Vol. CHE-3.1(2004). n. pag. Web 28 Sept. 2012. Read More
Share:
Tags
Cite this document
(“Chemistry Essay Example | Topics and Well Written Essays - 500 words - 9”, n.d.)
Chemistry Essay Example | Topics and Well Written Essays - 500 words - 9. Retrieved from https://studentshare.org/miscellaneous/1603166-chemistry

CHECK THESE SAMPLES OF Chemistry

...CHEMISTRY QUESTIONS Presented Intramolecular forces operate within the molecules or fundamental units of a substance. This would include the attraction between positive and negative ions in a crystal of an ionic compound, the covalent bonds in a molecular substance as well as the covalent bonds linking atoms in a network structure, such as that of carbon (diamond).Metallic bonds are also classified as intramolecular forces (Frederick, 1979, P.63)Intermolecular forces operate between, rather than within, the molecules of a covalent substance. This would include the attractions exerted by one molecule of a molecular substance on another, such as the force of attraction between water molecules in ice ,the attractions between atoms... relative...
2 Pages(500 words)Essay

...x100 = 65.62%. 137x27 Question – 3 a. In 1870, Markonikov laid down a basic principle of chemistry that holds till today. The Markonikov Rule states that when a hydrogen halide (Hydrochloric acid, HCl being an example) reacts with an asymmetrically substituted alkene the hydrogen attaches itself to the carbon atom that has the larger number of its hydrogen atoms substituted. The halogen automatically attaches itself to the carbon atom having the least number of its hydrogens substituted. An example of such an addition reaction: Cl2HC=CH2Cl + HCl  Cl2H 2 C=CH2Cl2 Here the halide chlorine attached to the right hand side of the molecule that had fewer hydrogen atoms replaced. b. Enantiomers...
4 Pages(1000 words)Essay

...Isaac Mutinda Order: 127810 CHEMISTRY WEEK Q This is a good advice because it will help in achieving accuracy and hence uncertainties in measurement are avoided. Q.2. These data are in accordance with the multiple proportion which states that when two elements combines together to form more than one compound, there is a simple numerical ratio between the different masses of one element which will combine with a fixed mass of the other. R1 Q1 R2 Q2 14.00g 3.00g 7.00g 4.50g 7.00g 1.50g The mass of Q combining with the mass of R... ...
3 Pages(750 words)Essay

...Chemistry Question One A and B Properties of gold, cube Density of gold = 19.3g/ml A Mass 11.439g B Volume of water 5.1ml With gold cube = 5.7ml a) The graduated cylinder has an accuracy of 0.1 ml, the electronic balance has an accuracy of 0.0001 g. according to the measurements given on volume they are accurate according to the minimum readable measurement given by the cylinder. The measurement given on the mass seems not to be accurate because the minimum measure of mass according to the apparatus is 0.0001, therefore if the measure was exactly 11.439 g then this should have been written as 11.4390 g. b) Volume of the gold cube 5.7 – 5.1 = 0.6ml c) Density and mass find volume of gold cube Density = Mass/Volume Volume =...
6 Pages(1500 words)Essay

...Chemistry Describe the configuration of an atom. An atom is composed of a nucleus. The atom also possesses atomic orbitals and energy levels which are made up of electrons. 2.) Explain the process of radioactive decay which takes place on (^14)(^6)C or what is known as carbon 14. A radio carbon such as carbon 14 will undergo a process of electron mission, therefore losing energy and moving ultimately to a place of chaos or entropy. The following formula will illustrate the radioactive beta decay which will act on carbon 14: ^14_6C------> ^14_7N+e 3). Utilize the S P D orbital system to describe Potassium. An orbital is essentially a theory of something rather than an actual something. This orbital is said to contain...
2 Pages(500 words)Essay

...Hydrogen Introduction Hydrogen is one of the essential elements of life however very few individuals understand its complex series of uses. While itwas first detected as early as the 16th century, it wasn’t until nearly two-hundred years later that it was rediscovered and given its chemical name. Hydrogen combines to form a countless number of compounds that position it as a cornerstone to life in the universe. It is an essential element in things as essential as water, as small as healing cuts and bruises, and as large and industrial as oil refinement. This essay examines the historical background of hydrogen, its chemical formula and elements, as well as its use in compounds that make up the fabric of our very existence... Introduction...
7 Pages(1750 words)Research Paper

...→M charge transfer where the absorption coefficients are low as 15000 dm-3mol-1cm-1 and longer wave number of up to 49000cm-1. In a compound where X = Br that is bromide compound produce transmissions that produce bands of the values approximately to these. Q7. The bond distance between C and N atoms will increase. This is due to reduced opposite charge potential between them that increase attraction. In C-N, C is partially negative while N is partially positive in charge because one electron is unbounded in C. Fe cations bond on the C side forming negative C-center hence the force of attraction is now distributed for both Fe and N. Cyanide ion is a strong enzyme inhibitor as it competitively binds with active enzyme site for the...
2 Pages(500 words)Essay

... Introduction to Chemistry: Analysis of Oxygen (O2) Introduction Oxygen is a chemical element that largely forms part of the atmospheric and is widely recognized with the sustenance of life and survival of organisms. It has a formula of O­2. As a chemical element, this substance has an atomic number of 8 and belongs to the chalcogen group on the periodic table; thus, making it build and possess certain significant characteristics for its operations such as being a highly reactive non-metallic element. Subsequently, oxygen is widely used as an oxidizing agent through its readiness to form compounds (in most cases oxides), with most of the atmospheric elements (Bauer, Birk & Pamela 145-149). Identification by mass sets this element... in...
4 Pages(1000 words)Term Paper
sponsored ads
Save Your Time for More Important Things
Let us write or edit the essay on your topic "Chemistry" with a personal 20% discount.
GRAB THE BEST PAPER

Let us find you another Essay on topic Chemistry for FREE!