Comments (0)
Add to wishlistDelete from wishlist
Cite this document
Summary
As to these differences, the most prominent are those related to structure. Lactobacillus bulgaricus bacteria are usually straight but can be spiral or coccobacillary in…
Download full paperFile format: .doc, available for editing
HIDE THIS PAPERGRAB THE BEST PAPER92.5% of users find it useful 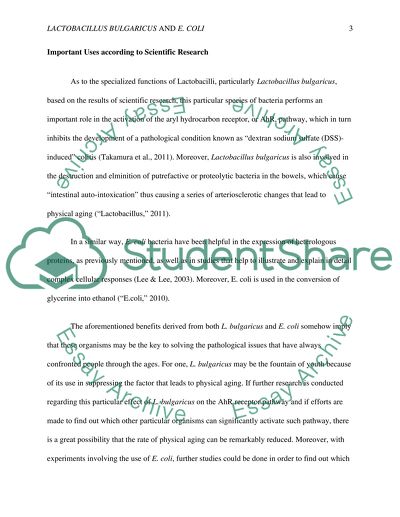 Lactobacillus bulgaricus, Escherichia coli, and Non-Pathogenic Microorganisms Teacher               Lactobacillus bulgaricus, Escherichia coli, and Non-Pathogenic Microorganisms
Differences
The Lactobacilli and the Escherichia bacteria differ as to structure, source, function, and pathogenicity. As to these differences, the most prominent are those related to structure. Lactobacillus bulgaricus bacteria are usually straight but can be spiral or coccobacillary in form and under particular conditions. Moreover, they exist in chains of varying lengths. On the other hand, Escherichia coli bacteria exist in colonies and have adhesive fimbriae, and unlike Lactobacillus, the Escherichia bacteria are nonmotile. Another difference between the two species of bacteria is where one can find them. While the Lactobacilli are found in plant herbage especially at temperatures between 30 and 40 degrees Celsius, the Escherichia bacteria are basically anaerobic and are found in the human colonic flora in the intestinal lumen. Thirdly, the Lactobacilli are involved in producing yoghurt and in maintaining healthy intestinal flora but the Escherichia bacteria are mainly used in industrial microbiology as an extremely versatile host of beneficial heterologous proteins, which can be mass produced through E. coli. Lastly, unlike Lactobacilli, E. coli can be pathological and may cause diarrhea, meningitis or urinary tract infection (“Lactobacillus,” 2010; “Escherichia,” 2010).
Similarities
When it comes to the similarities between Lactobacillus bulgaricus and Escherichia coli, only two things need to be noted: they are both rod-shaped and they both have benefits in the field of biotechnology.
Important Uses according to Scientific Research
As to the specialized functions of Lactobacilli, particularly Lactobacillus bulgaricus, based on the results of scientific research, this particular species of bacteria performs an important role in the activation of the aryl hydrocarbon receptor, or AhR, pathway, which in turn inhibits the development of a pathological condition known as “dextran sodium sulfate (DSS)-induced” colitis (Takamura et al., 2011). Moreover, Lactobacillus bulgaricus is also involved in the destruction and elminition of putrefactive or proteolytic bacteria in the bowels, which cause “intestinal auto-intoxication” thus causing a series of arteriosclerotic changes that lead to physical aging (“Lactobacillus,” 2011).
In a similar way, E. coli bacteria have been helpful in the expression of heterologous proteins, as previously mentioned, as well as in studies that help to illustrate and explain in detail complex cellular responses (Lee & Lee, 2003). Moreover, E. coli is used in the conversion of glycerine into ethanol (“E.coli,” 2010).
The aforementioned benefits derived from both L. bulgaricus and E. coli somehow imply that these organisms may be the key to solving the pathological issues that have always confronted people through the ages. For one, L. bulgaricus may be the fountain of youth because of its use in suppressing the factor that leads to physical aging. If further research is conducted regarding this particular effect of L. bulgaricus on the AhR receptor pathway and if efforts are made to find out which other particular organisms can significantly activate such pathway, there is a great possibility that the rate of physical aging can be remarkably reduced. Moreover, with experiments involving the use of E. coli, further studies could be done in order to find out which particular proteins are actually involved in the AhR receptor pathway in order to enhance this anti-aging process.
Benefits of Non-pathogenic Microorganisms
Non-pathogenic microorganisms have numerous benefits. Aside from the previously mentioned benefits of the featured bacterial organisms, some species of fungi are also beneficial. Fungi, particularly mushrooms, serve as food for plants, gnats, insects, arthropods, mollusks and humans (“The Fungus Kingdom,” 1997).
References
“E.coli Has Its Benefits – Rice University Scientist Honored for Research Converting Glycerine into High Value Products.” Retrieved June 13, 2012 from Enhanced Online News: http://eon.businesswire.com/news/eon/20100519006673/en.
“Escherichia.” (2010). Retrieved June 12, 2012 from Kenyon College: http://microbewiki.kenyon.edu/index.php/Escherichia.
“Lactobacillus bulgaricus.” (2011). Retrieved June 12, 2012 from BG Food: http://bacillusbulgaricus.com/lactobacillus-bulgaricus.htm.
“Lactobacillus.” (2010). Retrieved June 12, 2012 from Kenyon College: http://microbewiki.kenyon.edu/index.php/Lactobacillus.
Lee, P. S. & Lee, K. H. (2003). “Escherichia coli – a model system that benefits from and contributes to the evolution of proteomics.” Biotechnology and Bioengineering, 84(7), 801-814. Retrieved June 12, 2012 from the National Institutes of Health: http://www.ncbi.nlm.nih.gov/pubmed/14708121.
Takamura, T., Harama, D., Fukumoto, S., Nakamura, Y., Shimokawa, N., Ishimaru, K., Ikegami, S., Makino, S., Kitamura, M., & Nakao, A. (2011). “Lactobacillus bulgaricus OLL1181 activates the aryl hydrocarbon receptor pathway and inhibits colitis.” The Journal of Immunology and Cell Biology, 89(7), 817-822. Retrieved June 12, 2012 from the National Institutes of Health: http://www.ncbi.nlm.nih.gov/pmc/articles/PMC3257032/.
“The Fungus Kingdom: Who Likes Fungi?” (1997). Retrieved June 13, 2012 from Natural Perspective: http://www.perspective.com/nature/fungi/wholikes.html. Read More
Share:
Tags
Cite this document
(“Lactobacillus bulgaricus and E.coli. (Microbiology-SLP5) Essay”, n.d.)
Lactobacillus bulgaricus and E.coli. (Microbiology-SLP5) Essay. Retrieved from https://studentshare.org/miscellaneous/1598317-lactobacillus-bulgaricus-and-ecoli-microbiology-slp5

CHECK THESE SAMPLES OF Lactobacillus bulgaricus and E.coli. (Microbiology-SLP5)

...is a process where RNA and DNA are transferred from one bacterium to another (PBWorks, 2008). Lactobacillus bulgaricus can also be found in human intestines. Escherichia coli This bacterium occurs in the natural environment particularly fecal contaminated one but it carves its niche in the lower part of intestines of organisms that are warm blooded because there is a well balanced ecosystem. In the intestines there are specific nutrients that are provided and conditions are favorable for its growth and survival. Some strains of this bacterium especially O111, O145, O104:H21, O157:H7, O121, O104:H4, O26, and O103 are very pathogenic (Nicole et al., 2001). About 0.1% of the bacteria that...
3 Pages(750 words)Essay

...?Role of animals in E. coli infection Shiga toxin-producing E. coli (STEC) is the principal cause of hemolytic uremic syndrome (HUS), manifesting as acute renal failure, hemolytic anemia and thrombocytopenia (Bentancor et al., 2012). One of the more common STEC is the bacterial strain O157. The intestines of ruminant animals such as cattle, sheep, goats, and cow act as the principal reservoir for the growth of E. coli O157 (Bentancor et al., 2012; Quilliam et al., 2011). Because of its fecal-oral route of exposure, these animals are constantly exposed to this strain because of their diet. When an infected animal defecates, the grasses...
4 Pages(1000 words)Case Study

...? E. Coli risk communication Escherichia coli (E. Coli) are bacterium usually found in the feces and lower intestine of warm - blooded animals, humans included. E. Coli can directly or indirectly get in the food supply from the feces of the infected animal in an easy way. Many strains of E. Coli remain harmless, even beneficial. However, other strains may cause illness; a few can make an individual acutely sick (Nazeer, 2012). The most general health effect of E. coli remains a minor gastrointestinal infection, causing a diarrhea for a few days. The most...
4 Pages(1000 words)Case Study

...cheese and camembert cheese were Lactobacillus sp, Streptococcus sp and Penicillium sp. respectively. Introduction: Bacteria are ubiquitous in nature. They are beneficial and harmful to the human beings and animals. Bacteria are present in the food. Probiotics supplements contain specific strains of bacteria such as Lactobacillus and Bifidobacteria to increase the gut flora. Beneficial bacteria are present in the food and produce many important biological molecules. In the mozzarella cheese, Lactobacillus bulgaricus and Streptococcus thermophilus are present. Camembert cheese contains lactococcus and penicillium species are present. (Waites et al. 2009). Bacteria can be...
6 Pages(1500 words)Lab Report

...E-Coli Introduction Escherichia coli (E. coli), is among the important species of bacteria that dwells in the lower intestines of mammals. It is also known as gut flora which is useful when located in the large instestine and assists with waste processing, vitamin K production, and food absorption. Earlier Escherichia coli was originally known as Bacterium coli commune that was discovered in 1885 by the German pediatrician and bacteriologist, Theodor Escherich. E. coli belongs to the family Enterobacteriaceae (American Public Health Association 1998). It is abundant in human body and the number of individual E. coli bacteria found in the human feces every day averages between 100 billion and 10 trillion. E-coli is also found... in the...
8 Pages(2000 words)Essay

...The stock market in Japan peaked after the 1980’s when Japan gained dominance over the United s in the car marketplace and other high technological sectors. At the time one would think that good times would continue, but they did not. For over 15 years the Japanese securities marketplace has been on a downturn. In March 2004 the Nikkei stock index reached a 7909 value, which is the same value the index was in the year 1982 (International, 2008). The stock market in Japan has not done any better during the last five years with continuous struggles. The depletion of the stock market has hurt the nation’s banking system. The average Japanese stock pays less than one percent in annual dividends per year (Norris, 1995). In Japan... stock market in ...
2 Pages(500 words)Essay

...System Feedback Loops, SLP: Time Normal CEO, Clipboard Tablet Co VP Marketing, Clipboard Tablet Co Date: January 20, 2013 Subject: System Feedback Loops, SLP: Time Normal This brief report provides details of the marketing decisions undertaken by the VP Marketing of Clipboard Tablet Co. in the year 2016 and these decisions are reported on the basis of their effects on sales volume and profitability of the company’ tablet models that are X5, X6, and X7. In year 2015, the model X5 of tablets was discontinued for which reasons there was no incurred cost upon research and development for the model. However, it is essential to highlight here that the report contains the CVP analysis in order to compare and discuss significant trends... Feedback...
5 Pages(1250 words)Coursework

Let us find you another Essay on topic Lactobacillus bulgaricus and E.coli. (Microbiology-SLP5) for FREE!