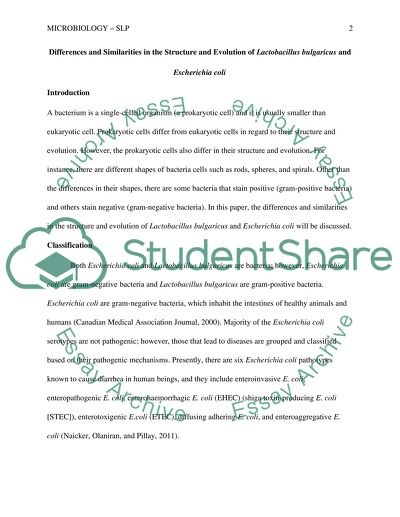 Differences and Similarities in the Structure and Evolution of Lactobacillus bulgaricus and Escherichia coli al AffiliationDifferences and Similarities in the Structure and Evolution of Lactobacillus bulgaricus and Escherichia coli
Introduction
A bacterium is a single-celled organism (a prokaryotic cell) and it is usually smaller than eukaryotic cell. Prokaryotic cells differ from eukaryotic cells in regard to their structure and evolution. However, the prokaryotic cells also differ in their structure and evolution. For instance, there are different shapes of bacteria cells such as rods, spheres, and spirals. Other than the differences in their shapes, there are some bacteria that stain positive (gram-positive bacteria) and others stain negative (gram-negative bacteria). In this paper, the differences and similarities in the structure and evolution of Lactobacillus bulgaricus and Escherichia coli will be discussed.
Classification
Both Escherichia coli and Lactobacillus bulgaricus are bacteria; however, Escherichia coli are gram-negative bacteria and Lactobacillus bulgaricus are gram-positive bacteria. Escherichia coli are gram-negative bacteria, which inhabit the intestines of healthy animals and humans (Canadian Medical Association Journal, 2000). Majority of the Escherichia coli serotypes are not pathogenic; however, those that lead to diseases are grouped and classified based on their pathogenic mechanisms. Presently, there are six Escherichia coli pathotypes known to cause diarrhea in human beings, and they include enteroinvasive E. coli, enteropathogenic E. coli, enterohaemorrhagic E. coli (EHEC) (shiga toxin-producing E. coli [STEC]), enterotoxigenic E.coli (ETEC), diffusing adhering E. coli, and enteroaggregative E. coli (Naicker, Olaniran, and Pillay, 2011).
However, pathotypes of E. coli such as ETEC and STEC are potent pathogens linked with mortality and waterborne disease outbreaks in humans (Naicker, Olaniran, and Pillay, 2011). On the other hand, Lactobacillus delbrueckii subspecies bulgaricus is a gram-positive bacterium, and it is closely associated to L. acidophilus, L. acetotolerans, L. amylophilus, L. gasseri, L. helveticus, and L. amylovorus. The ratio of GC content in L. delbrueckii subsp. bulgaricus is higher (49-51 percent) than the other species (34 – 46 percent) in this phylogenetic tree (The Regents of the University of California, 2012).
Structure
The structure of both Escherichia coli and Lactobacillus bulgaricus are the same. Both bacteria are rod shaped, and they are non-spore forming. However, there are differences that distinguish Escherichia coli from Lactobacillus bulgaricus. Escherichia coli are non-spore forming rod bacteria. Most of the strains possess peritrichous flagella, fimbriate and motile. A capsule in the form of mucoid is usually present. They are usually serotyped based on their antigenic structure, that is, they are classified based on their lipopolysaccharide. The lipopolysaccharide O is the somatic antigen, H is the flagellar antigen, and K is the capsular antigen. E. coli have non-flagellar appendages referred to as pilli. It is important to note that some rods are flagellated, and others are not but in the case of E. coli, they do not possess flagella. They also possess endotoxins just like the other gram-negative bacteria. Endotoxins are less toxic than exotoxins, and they are generally released in soluble form when the bacteria is growing and freed when the bacteria lyses. It is important to note that there are particular strains of E. coli that produce exotoxins (Nagaraja, 1999).
Lactobacillus delbrueckii subsp. bulgaricus cell is a nonmotile rod with rounded edges. They usually occur singly and in short chains. Lactobacillus bulgaricus generally contain internal granulation demonstration with methylene blue stain, which makes it a gram-positive bacterium. The surface growth of the cell (Lactobacillus bulgaricus) is greatly improved by anaerobiosis or reduced oxygen pressure. They are obligately homofermentative and grow well at a temperature of 45°C (Bergey and Boone, 2009). Other important features of this species are that it is non-spore forming and facultatively anaerobic. The specie is acid tolerant, and it is unable to synthesize porphyrins. It has a strictly fermentative metabolism, and lactic acid is the main metabolic product.
References
Bergey, D. H., & Boone, D. R. (2009). Bergey’s manual of systematic bacteriology, volume 3. New York, NY: Springer.
Canadian Medical Association Journal. (2000). Escherichia coli O157:H7. Canadian Medical Association Journal 163(2), 205.
Nagaraja, K. V. (1999). Genus: Escherichia Species: Escherichia coli [PowerPoint slides]. Retrieved from http://www.cvm.umn.edu/Academics/course_web/current/Cvm6202M/pdf_files/4-2_Ecolorevised.pdf
Naicker, K., Olaniran, A. O., & Pillay, B. (2011). Toxigenic Escherichia coli and Vibrio cholera: Classification, pathogenesis and virulence determinants. Biotechnology and Molecular Biology Review, 6(4), 94-100.
The Regents of the University of California. (2012). Lactobacillus delbrueckii bulgaricus ATCC BAA-365. Retrieved from http://genome.jgi-psf.org/lacde/lacde.home.html Read More
Share:
Tags
Cite this document
(“Microbiology- SLP Essay Example | Topics and Well Written Essays - 500 words”, n.d.)
Microbiology- SLP Essay Example | Topics and Well Written Essays - 500 words. Retrieved from https://studentshare.org/miscellaneous/1595466-microbiology-slp

CHECK THESE SAMPLES OF Microbiology- SLP

...?Microbiology Essay In 1835 Bassi showed that a fungus caused silkworm disease, and in 1865 Pasteur discovered that a protozoan caused another silkworm disease. Why do we use Koch’s postulates instead of “Bassi’s” or “Pasteur’s” postulates? Bassi and Pasteur both worked on silkworm diseases. Bassi in the year 1835, established that a microscopic organism, a fungus, caused disease in the silk worm. Around 30 years later, in the year 1865, Pasteur established that another microbe, a protozoan, cause infection in silkworms. These findings established an association between the “questioning” microbes and disease. Indicating that disease is caused due to the attack by tiny micro-organisms. This formed the basis for further...
2 Pages(500 words)Essay

...?Microbiology Microbiology is the science that studies microorganism. They can be pathogenic or non-pathogenic; they can be beneficial for human environment or be hazardous for human health. This research comprises similarities and differences between Variola viruses or Poxvirus and Staphylococcus epidermis. Moreover, benefits of non-pathogenic microorganisms in human environment are discussed further on. Variola virus and Staphylococcus epidermis: comparing and contrasting Variola virus infects human beings. It can be transmitted to other humans via face-to-face contact or contact with other objects, or through the air. Nevertheless, not all the ways of the virus transmission have been fully defined and studied by the scientists... Microbiolo...
2 Pages(500 words)Essay

...? Microbiology Practical Describe the full theory behind the catalase test. Why must plain agar be used? Catalase is an enzyme that converts hydrogen peroxide to water and oxygen. Aerobic and facultative organisms have developed various protective mechanisms against the toxic forms of oxygen (especially superoxide radicals as they can potentially inactivate vital cell components). Enzyme known as superoxide dismutase, eliminates superoxide radicals by enhancing the rate of reaction. During the process toxic substance hydrogen peroxide (H2O2) and hydroxyl radical (OH-) are produced, which in turn is dissipated by catalase and peroxide enzymes respectively. Catalase test is used to identify organisms that are capable of...
10 Pages(2500 words)Coursework

...and Enterobacteriaceae. The chief function of MacConkey agar is to isolate Enterobacteriaceae bacterial strains from food, waste water, feces and urine. It also serves as a differential medium for discerning enteric-gram negative bacteria. (CONDA, 2008) Enterobacteriaceae are visible forms of lactose-fermenting colonies of Gram negative bacteria (Microbiology and Immunology Online University of South Carolina School of Medicine, 2007) Strains of nonmucoid colonies became visible, confirmed by the API 20 E test. While the MRS Agar is used for isolating strains of Lactobacillus, the Slanetz & Bartley Agar is used to detect the count of Enterococcus. MRS Agar is used for detecting strains of Lactobacillus. (Neogen, 2008)...
30 Pages(7500 words)Lab Report

...SLP 1. Identify two health professions and two public health agencies Two health professions affected by public health agencies are Medical Technology, or medical lab science and Environmental Health. A quick overview of the two fields: Medical Technology Medical technology has recently been renamed as Clinical Laboratory Science. It involves the examination of blood, tissue and body fluids to provide results to an attending physician who is treating patients. Degrees in the field are offered worldwide from an Associate to Doctoral level.. The usual requirement for an entry-level position as a clinical laboratory technologist is a bachelor's degree with a major in medical technology or one of the life sciences; however,...
11 Pages(2750 words)Essay

...1. a. Substances capable of inducing specific immune responses are referred to as antigens. The properties of a good antigen are – 1. Induction of an immune response(immunogenecity) 2. Specific reaction with antibodies or sensitized cells( immunological reactivity) b. 2. a b. Immunoglobulin are of 5 classes namely IgG, IgA, IgM, IgD & IgE. IgG: - This is the major serum immunologlobulin constitutes about 80% of total serum immunoglobulin. It has a molecular weight of 1,50,000. There are four IGg sub classes in humans, IgG1, IgG2, IgG3, IgG4 IgA: - This is the 2nd most abundant class, constituting about 10-15% of serum immunoglobulin. It is a major... a. Substances...
2 Pages(500 words)Essay

...Microbiology Introduction: The food ingredients that are used in the domestic kitchen are found to contain potential pathogenic micro organisms. They are found to cause large outbreaks of food borne diseases. The foods are prepared either by the untrained people or trained people without following the food safety methods. Of the foods, poultry was identified as the major source for pathogenic micro organisms mainly concentrated on the raw chicken that are mainly concentrated with Escherichia Coli, Campylobacter, Salmonella and Staphylococcus. The raw chicken wash waters are found to contain a large number of coliform and the hygiene of the washing up clothes is also generally poor. An evaluation of the total viable count...
6 Pages(1500 words)Essay
sponsored ads
Save Your Time for More Important Things
Let us write or edit the essay on your topic "Microbiology- SLP" with a personal 20% discount.
GRAB THE BEST PAPER

Let us find you another Essay on topic Microbiology- SLP for FREE!