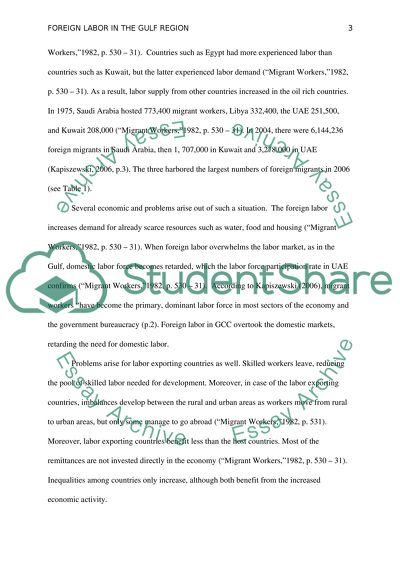 Extract of sample "Foreign Labor in the Arab Gulf"

Foreign Labor in the Gulf Region In the 1950’s, the Gulf Region experienced a silent revolution due to oil reserves (Khalaf & Alkobaisi, 1999, p.271). These countries are: Saudi Arabia, Kuwait, Bahrain, Qatar, the United Arab Emirates (UAE) and Oman (Kapiszewski, 2006, p.2). This revolution transformed the region within a short time period from poor, mostly rural areas into some of the wealthiest in the world. They formed the Gulf Cooperation Council (GCC) in 1981 (Kapiszewski, 2006, p.2). The transformation was catalyzed by the influx of foreign labor (Khalaf & Alkobaisi, 1999, p.272). Their numbers only increased over the years. The capital rich countries possessed the resources, and labor rich countries possessed the needed skilled workers. Despite the economic benefits, the largest disadvantage has been the overwhelming share of foreign labor on the labor markets of GCC, retarding the development of indigenous labor.
Presence of foreign labor increased to dramatic levels in some Gulf countries. Natives of Kuwait, Qatar and UAE have become minorities as a result of the increase in the number of foreigners in their countries (Khalaf & Alkobaisi, 1999, p.272). UAE is the extreme case. it was estimated in the 1990’s that “nationals constituted only 10-20% of the total population (Heard-Bey, 1997), and only 10% participation in the total labour force (Al-Mansour, 1996)” (Khalaf & Alkobaisi, 1999, p.272). According to Kapiszewski (2006), “[t]he population in the current GCC states has grown more than eight times during 50 years; to be exact, from 4 million in 1950 to 40 million in 2006” (p.2). The only GCC countries that managed to retain low levels of foreign labor are Oman and Saudi Arabia, at 20 and 27 percent respectively (Kapiszewski, 2006, p.2).
The flow has been from labor rich to capital rich countries. Oil rich countries have low population levels. On the other hand, oil poor countries in the region have large populations. Such countries in the 1970’s were Egypt, Yemen, Sudan, Jordan and Syria (“Migrant Workers,”1982, p. 530 – 31). Countries such as Egypt had more experienced labor than countries such as Kuwait, but the latter experienced labor demand (“Migrant Workers,”1982, p. 530 – 31). As a result, labor supply from other countries increased in the oil rich countries. In 1975, Saudi Arabia hosted 773,400 migrant workers, Libya 332,400, the UAE 251,500, and Kuwait 208,000 (“Migrant Workers,”1982, p. 530 – 31). In 2004, there were 6,144,236 foreign migrants in Saudi Arabia, then 1, 707,000 in Kuwait and 3,278,000 in UAE (Kapiszewski, 2006, p.3). The three harbored the largest numbers of foreign migrants in 2006 (see Table 1).
Several economic and problems arise out of such a situation. The foreign labor increases demand for already scarce resources such as water, food and housing (“Migrant Workers,”1982, p. 530 – 31). When foreign labor overwhelms the labor market, as in the Gulf, domestic labor force becomes retarded, which the labor force participation rate in UAE confirms (“Migrant Workers,”1982, p. 530 – 31). According to Kapiszewski (2006), migrant workers “have become the primary, dominant labor force in most sectors of the economy and the government bureaucracy (p.2). Foreign labor in GCC overtook the domestic markets, retarding the need for domestic labor.
Problems arise for labor exporting countries as well. Skilled workers leave, reducing the pool of skilled labor needed for development. Moreover, in case of the labor exporting countries, imbalances develop between the rural and urban areas as workers move from rural to urban areas, but only some manage to go abroad (“Migrant Workers,”1982, p. 531). Moreover, labor exporting countries benefit less than the host countries. Most of the remittances are not invested directly in the economy (“Migrant Workers,”1982, p. 530 – 31). Inequalities among countries only increase, although both benefit from the increased economic activity.
In short, oil brought along development in GCC, but also a decrease in labor force participation among domestic labor force. Shares of foreign labor reached high levels. Only Oman and Saudi Arabia managed to retain low shares of foreign labor. UAE is the extreme case where natives have become a tiny minority.
References
Sulayman Khalaf and Saad Alkobaisi (1999). Migrants strategies of coping and patterns of
accommodation in the oil-rich Gulf societies: Evidence from the UAEA.
British Journal of Middle Eastern Studies, 26 (2), 271-298.
Migrant Workers in the Arab Middle East (1982). Third World Quarterly, 4( 3), 530-531.
Library of Congress (2005). “Country Profile: Libya.” Retrieved from
http://lcweb2.loc.gov/frd/cs/profiles/Libya.pdf
Kapiszweski, A. (2006). Arab versus Asian migrant workers in the GCC countries. Retrieved
from http://www.un.org/esa/population/meetings/EGM_Ittmig_Arab/P02_Kapiszewski.pdf
Appendix
Table 1
Migrant Labor Force in Select GCC
Country\Year
1975
2004
Kuwait
208,000
1, 707,000
Libya
332,400
957,369
Saudi Arabia
773,400
6,144,236
United Arab Emirates
251,500
3,278,000
Source: “Migrant Workers” (1982), Kapiszewski (2006) and Library of Congress (2005) Read More
Share:
Tags
Cite this document
(“Foreign Labor in the Arab Gulf Essay Example | Topics and Well Written Essays - 500 words”, n.d.)
Foreign Labor in the Arab Gulf Essay Example | Topics and Well Written Essays - 500 words. Retrieved from https://studentshare.org/miscellaneous/1597308-foreign-labor-in-the-arab-gulf

CHECK THESE SAMPLES OF Foreign Labor in the Arab Gulf

...﻿Turkey's Foreign Policy on Arab Spring Introduction Turkey has had an ever-changing foreign policy which has hurt it in some ways in this spring’s uprisings in Egypt, Tunisia and Libya, as well as hurt it in its relations with the West. While Turkey, with its secular democracy, booming economy and modernity, makes it a natural ally for the West, and, in fact, this was the case for a number of years, in recent years the opposite has been true. Specifically, Turkey’s foreign policy has not been anchored by the axis formed by Western countries, as the Western countries, by and large, are seeking to isolate countries that Turkey has befriended and supports. These countries...
20 Pages(5000 words)Essay

... for conflict resolution are needed in any company, whether or not a union is in place. While managers often have an open-door policy that allows employees to come and discuss concerns and complaints, the policy has many disadvantages; such as the lack of fairness and equity. Non-union employers have made attempts at improving their open-door policy by enhancing equity and voice. Still, these non-union workers have a protected right, under federal labor law—section 7 of the National Labor Relations Act (NLRA)—to engage in concerted action and form a union if they are unsatisfied with the changes and processes in place with their employer.... chapter nine of the text, the importance of contract unions in the United s, and how the unions...
1 Pages(250 words)Essay

Labor Relations in Different Organizations in The United Arab Emirates

...﻿Labor relations in different organizations in the United Arab Emirates (UAE) revolve around the regulations imposed by the Ministry of Labor. Meaning, they apply to both employees and employers working the various industries in the UAE. The UAE has traditional values compared to other modernized nations. Therefore, this affects its labor relation policies and their implementation by the various organizations based in the UAE. It is also necessary to note that the policies imposed by the Ministry of Labor are federal meaning they apply to all the Emirates in the UAE. The following paper analyses, types of work permits, the different categories of...
5 Pages(1250 words)Essay

...and Qatar over the Hawar islands in the late 1990s, which was resolved in March 2003, others have not been. Indeed, some of these conflicts have not even been discussed because of the huge amount of natural resources underneath these territories. This exacerbates the nature of the conflicts and renders their resolution a highly problematic and complex undertaking. This is because the inherent complexity of distributing natural resources. Considering that mistrust prevails amongst the Arab Gulf sates, it would be fallacious to claim that the smaller Gulf states feel threatened only by Iran. Their fears, which induced them to invite foreign forces into their...
12 Pages(3000 words)Essay

...A clear understanding on which employees are en d to overtime pay is necessary in order to avoid conflicts between the employee and the employer.In this response, the employees entitled to receive the pay are referred to as non-exempt employees while those with no right to be compensated for the overtime are referred to as exempt employees. This classification is mainly based on the employee’s salary and the type of job assigned to them. To ensure that there is fairness in offering the compensation, there are set rules that outline the condition, provisions for employees under eighteen years, employee’s break. For the employees, they are supposed to account on the time spent in conducting the assignment. According to the Fair...
1 Pages(250 words)Admission/Application Essay

...Human Resource Management: Labor Unions First of College or In any lucrative business where there is a considerable number of employees, it is important for that business to have a functional Human Resource department for the purpose of regulating labor practices and instilling a work environment that is safe and healthy. The United States, through the Occupational Safety & Health Administration, almost all employed Americans are ensured a safe and healthy working environment. This was achieved with legislature passing the Occupational Safety & Health Act of 1970 and designed to help preserve the rights of both the employer and the employee. While the responsibility for providing a safe work...
1 Pages(250 words)Essay

...Gulf Stream Gulf Stream The turning off of the Gulf Stream would present a fundamental challenge in making a schedule of the various ships that are supposed to utilise that route. These oceanic conditions will necessitate the change of routes for the many ships that might have an adverse effects on the financial aspects of the shipping operations (Rossby, Flagg, & Donohue, 2010). The aspects of rescheduling the routes presents a fundamental challenge in the management of other factors associated with the shipping operations. Programming based on prevailing weather conditions cannot be conducted accurately as similar conditions might be present on other routes (Windeck, 2013). There is a...
1 Pages(250 words)Assignment

...Jstor Research What is the of the article? Its is “Cross-Cultural Ethics and the Child Labor Problem”. 2. What is the article’s main argument/thesis? Child labor is inefficient and injurious, in both the short run and the long run, to workers, nations, and the world economy – that it is so counterproductive as to be injurious to society itself – in short, that is at odds with established precepts of economic theory. 3. What are some of the minor points? What “support” does the author provide? Also be sure you mark the page number (the article) and paragraph number (of the page) where you found this information. a. The author gave the examples of developing countries for informing about adverse conditions...
4 Pages(1000 words)Essay

...the performance of the production of its two classes of furniture. What could be the most possible reason for the low levels of profitability against sales in the case of this company is that, by expanding their inventory, costs rise from additional needs. According to Altendorfer (2013), in similar cases the rising costs may always be because of requirements for more storage space, increased costs of labor for the additional units in their procurement and sourcing. Another issue facing Gulf Creative Ideas could be the reluctance of the management to remove the slow moving general-purpose furniture from their product portfolio and this eats up its earnings in the additional costs that increase at faster...
2 Pages(500 words)Case Study
sponsored ads
Save Your Time for More Important Things
Let us write or edit the essay on your topic "Foreign Labor in the Arab Gulf" with a personal 20% discount.
GRAB THE BEST PAPER

Let us find you another Essay on topic Foreign Labor in the Arab Gulf for FREE!