The Viability, Practicability, and Effects of a Currency/Monetary Union for the Gulf Cooperation Council - Essay Example

Comments (0)
Add to wishlistDelete from wishlist
Cite this document
Summary
The Gulf Cooperation Council (GCC), more formally known as the Cooperation Council for the Arab States of the Gulf, is a trade bloc wherein six Arab states of the Persian Gulf carry with them many economic and social objectives. …
Download full paperFile format: .doc, available for editing
HIDE THIS PAPERGRAB THE BEST PAPER95.3% of users find it useful 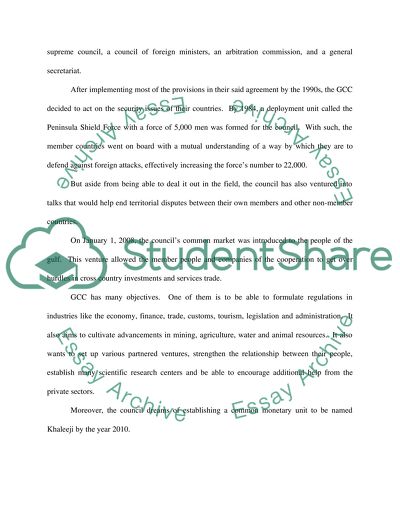 Extract of sample "The Viability, Practicability, and Effects of a Currency/Monetary Union for the Gulf Cooperation Council"

Download file to see previous pages The Iraq-Iran War, Iranian Revolution and Soviet invasion of Afghanistan were all major reasons the six countries mentioned above decided to form the GCC. This was primarily because they had the same vision of how their economies should be. They also agreed on what kind of defense is most effective against entities that could damage their countries.
The council was created on May 25, 1981 while on November 11, 1981, a unified economic agreement was signed between the partner countries. After the signing of the agreement in Riyadh, Saudi Arabia, the member countries were referred to as the Gulf Cooperative Countries.
The countries around the Persian Gulf are not all council members. Even nations like Iran or Iraq which border the Persian Gulf, did not come on board with the council. Meanwhile, Yemen seems to be warming up to the thought of joining the said cooperation.
Also, its headquarters may be found in Saudi Arabia. The council, having an administrative structure, meets about twice every year. For its governing bodies, there is a supreme council, a council of foreign ministers, an arbitration commission, and a general secretariat.
After implementing most of the provisions in their said agreement by the 1990s, the GCC decided to act on the security issues of their countries. By 1984, a deployment unit called the Peninsula Shield Force with a force of 5,000 men was formed for the council. With such, the member countries went on board with a mutual understanding of a way by which they are to defend against foreign attacks, effectively increasing the force’s number to 22,000.'s number to 22,000.
But aside from being able to deal it out in the field, the council has also ventured into talks that would help end territorial disputes between their own members and other non-member countries.
On January 1, 2008, the council's common market was introduced to the people of the gulf. This venture allowed the member people and companies of the cooperation to get over hurdles in cross country investments and services trade.
GCC has many objectives. One of them is to be able to formulate regulations in industries like the economy, finance, trade, customs, tourism, legislation and administration. It also aims to cultivate advancements in mining, agriculture, water and animal resources. It also wants to set up various partnered ventures, strengthen the relationship between their people, establish many scientific research centers and be able to encourage additional help from the private sectors.
Moreover, the council dreams of establishing a common monetary unit to be named Khaleeji by the year 2010.
Recognizably, due to the richness of the six member countries from their oil, petroleum and natural gas reserves, their economies are some of the fastest growing in the world. Over $900 billion in assets are being maintained by UAE investors in order to create a tax base and economic foundation before their natural resources finally run out.
According to the International Monetary Fund (IMF), the said region's 2006 Gross Domestic Product (GDP) was pegged at $717.8 billion. This was primarily because of the sudden economic growth in Qatar and the UAE. Just a year after, it became a whopping $1,022.62 billion. With the way it is going, the IMF predicts that it will reach about $1,112.076 billion by the end of this year and $1,210.112 by the end of 2009. A member country, Qatar, is also pegged to outrank Luxembourg as the topmost per capita grosser in GDP.
Aside from their economies, their region has also been recently been the venue for ...Download file to see next pagesRead More
Share:
Tags
Cite this document
(“The Viability, Practicability, and Effects of a Currency/Monetary Essay”, n.d.)
Retrieved from https://studentshare.org/miscellaneous/1525417-the-viability-practicability-and-effects-of-a-currencymonetary-union-for-the-gulf-cooperation-council

(The Viability, Practicability, and Effects of a Currency/Monetary Essay)
https://studentshare.org/miscellaneous/1525417-the-viability-practicability-and-effects-of-a-currencymonetary-union-for-the-gulf-cooperation-council.

“The Viability, Practicability, and Effects of a Currency/Monetary Essay”, n.d. https://studentshare.org/miscellaneous/1525417-the-viability-practicability-and-effects-of-a-currencymonetary-union-for-the-gulf-cooperation-council.
Comments (0)
Click to create a comment or rate a document

CHECK THESE SAMPLES OF The Viability, Practicability, and Effects of a Currency/Monetary Union for the Gulf Cooperation Council

Trade Related Intellectual Property Rights: A study on its legal and political impact

... improvements made to products entering international trade that have been matched by imitative technology that has made reproduction and imitation simpler and cheaper (Chapter 20, n.d.). Nations that do not strictly enforce IP rights show an increased rate of counterfeit and pirated goods for sale in domestic markets and also available for export (Chapter 20, n.d.). trips within the middle east An abundance of countries either deign not to provide protection or provide protection that falls below the levels mandated by TRIPS (Gangil, Thunga, and Nagaich, 2010). The United Arab Emirates (UAE) have recently announced new determinations regarding the laws affecting IP as well as those of the greater Gulf Cooperation Council (GCC) Customs...
60 Pages(15000 words)Dissertation

...the 1990s, the GCC countries also attempted to establish a customs union (MacDonald & Al Faris, 2010). Today, the existing relationships between Gulf countries lay a solid foundation for implementing the Gulf Currency Union idea into practice. It should be noted, that more and more researchers are interested in analyzing the effects of GCU on the Middle Eastern world. The topic of monetary union in the Gulf region remains one of the popular objects of public and political debate. Previous literature “has concentrated on three main themes, namely, the costs and benefits...
6 Pages(1500 words)Research Proposal

The Condition of the Business: Change Management Theory

...economic agreement on 11 November 1981 in Abu Dhabi. Initially, the Gulf Cooperation Council covered about 630-million-acre (2,500,000 km2) area where Yemen is now under consideration for membership (Low and Salazar, 2010, p.3). The special economic relations of these Arab countries, Islamic beliefs, similar political systems, geographic proximity, and common objectives were the drivers to the formation of the GCC (GlobalSecurity.org 2012, p.1). Indeed, the common objectives to the formation of the GCC include the establishment of scientific research centers, joint ventures, and a common market currency by 2010. Moreover, GCC has an objective of strengthening relations...
4 Pages(1000 words)Essay

...objectives. It is composed of six Arab states situated along the Persian Gulf. These states include Bahrain, Kuwait, Oman, Saudi Arabia, United Arab Emirates (UAE) and Qatar. This union was formed with the mind of achieving a myriad of objectives among them the establishment of a common currency. This meant that the states of the union had to decide on the currency to use, which had to be the only currency in circulation in the states. Hence, that objective of having a common currency resulted in a suggestion of the formation of the Central Bank of Gulf Cooperation...
6 Pages(1500 words)Research Paper

...agreement. The second one is creation opening up of borders for free movement of goods and capital. The third one is opening borders fro free movement o f people, and the fourth one is attaining a common currency for the region. These cannot be achieved at once and there is need to have a 5 years allowance for each step before the other one is entered into. References Dargin, J. (2006). Gulf Gas Initiative. Retrieved from, http://www.oxfordenergy.org/htm on 15th February 2008 EU External Relations (2007). The EU and the Gulf Cooperation Council. European Union External Relations Issue 4. Global...
4 Pages(1000 words)Essay

...﻿Challenges Facing the Gulf Cooperation Council The GCC was set up in 1981 by the heads of states of six nations namely; Kuwait, Bahrain, Qatar, Oman, united Arab emirates and Saudi Arabia. The main purpose of GCC formation was to attain unity among member states based on their common goals and their similar cultural and political identities. GCC is founded on Muslims beliefs, and presidency of the council rotates on a yearly basis (Korany & Dessouki, 2010). GCC was mainly formed to promote cooperation among the citizens of member states, as well as, make strong relations among member countries. The GCC member countries face challenges in achieving a...
11 Pages(2750 words)Thesis Proposal

...with the proactive and valuable information to answer the escalated doubts raised by investors and policy makers about the compatibility of GCC stock markets’ behavior with GCC economies fundamentals (Dar and Presley, 2001). Therefore, the discussion concludes that the GCC stock markets are susceptible to effects of oil price shocks since they are the major world energy players. Finally, the findings need to attract significance attentions from researchers, market participants, and regulators. Particularly, the GCC nation’s policymakers in OPC must maintain a close eye on the fluctuations of oil price on their individual economies as well as stock markets. Reference Dar, H.A., and Presley, J.R. (2001). The...
4 Pages(1000 words)Assignment

...of the Gulf Cooperation Council Gulf Cooperation Council was started in 1981 by the leaders of the state of Kuwait, Qatar, Bahrain, Oman, United Arab Emirates and Saudi Arabia (Rashid, 21). The purpose of the council was to promote and enhance close ties among the member states and by formulating strategies to ensure that non-GCC countries would not intimidate its members or attack them. As a result, the council engages in integration courses including peace campaigns in its member’s countries (23). The council intentions are more visible in its political activities including the...
2 Pages(500 words)Essay
sponsored ads
Save Your Time for More Important Things
Let us write or edit the essay on your topic "The Viability, Practicability, and Effects of a Currency/Monetary Union for the Gulf Cooperation Council" with a personal 20% discount.
GRAB THE BEST PAPER

Let us find you another Essay on topic The Viability, Practicability, and Effects of a Currency/Monetary Union for the Gulf Cooperation Council for FREE!