Comments (0)
Add to wishlistDelete from wishlist
Cite this document
Summary
The fact that political influence on the judicial system is rampant in most countries cannot be involved. This can be clarified by comparing the US and South Korea. In some cases, the elites…
Download full paperFile format: .doc, available for editing
HIDE THIS PAPERGRAB THE BEST PAPER94.5% of users find it useful 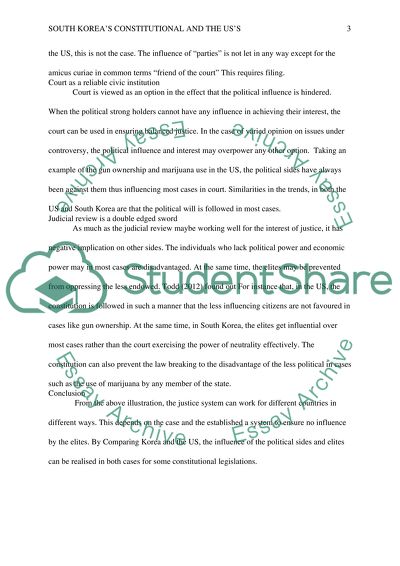 South Korea’s Constitutional Review in Contrast with the US’s Task: South Korea’s Constitutional Review in Contrast with the US’s
Introduction
The constitution is a tool meant to bring justice for all on equal grounds in a country. The fact that political influence on the judicial system is rampant in most countries cannot be involved. This can be clarified by comparing the US and South Korea. In some cases, the elites take advantage and defy the constitution or influence ruling. However, the constitution can also be used to prevent the elites from oppressing the less influential.
Principled versus political motives in judicial decisions
It is normal for any constitution review to be based on neutrality and free from political influence for fair trials to be achieved. As such, the judicial court systems operate independently despite the profile of the case or the people involved. The constitution in the US caters for the restriction of gun and marijuana. The national fire arm act (1934), the gun control act and the Brady bill among others stated the rules and set regulation of ownership. However, in 2009, the US begun considering a review of these regulations just like in South Korea. The motive behind the gun control, however, is more political and elite influenced than neutrally viewed. For instance, Chicago mayor Daley’s protection is catered for by the taxpayer’s money in hiring the bodyguards, but the citizens are denied by law to defend themselves using guns. The drug controls on the other side in the US traffickers are hunted down more than the users.
High profile cases
It is evident that the elites who take part in most court cases have political motives rather than the quest for justice. As for this issue, a politician may decide to pick on a case in court for the purpose of gaining political ground or fame. Cases in Korea of such kinds arise when there is disagreement between different parties or individuals in the line of politics (Dae & Tae-gyu, 1990, p. 138). As such, the constitution is often defied by the political systems. In the US, this is not the case. The influence of “parties” is not let in any way except for the amicus curiae in common terms “friend of the court” This requires filing.
Court as a reliable civic institution
Court is viewed as an option in the effect that the political influence is hindered. When the political strong holders cannot have any influence in achieving their interest, the court can be used in ensuring balanced justice. In the case of varied opinion on issues under controversy, the political influence and interest may overpower any other option. Taking an example of the gun ownership and marijuana use in the US, the political sides have always been against them thus influencing most cases in court. Similarities in the trends, in both the US and South Korea are that the political will is followed in most cases.
Judicial review is a double edged sword
As much as the judicial review maybe working well for the interest of justice, it has negative implication on other sides. The individuals who lack political power and economic power may in most cases are disadvantaged. At the same time, the elites may be prevented from oppressing the less endowed. Todd (2012) found out For instance that, in the US, the constitution is followed in such a manner that the less influencing citizens are not favoured in cases like gun ownership. At the same time, in South Korea, the elites get influential over most cases rather than the court exercising the power of neutrality effectively. The constitution can also prevent the law breaking to the disadvantage of the less political in cases such as the use of marijuana by any member of the state.
Conclusion
From the above illustration, the justice system can work for different countries in different ways. This depends on the case and the established a system to ensure no influence by the elites. By Comparing Korea and the US, the influence of the political sides and elites can be realised in both cases for some constitutional legislations.
References
Todd, D. et al. (2012). State and Local Politics: Institutions and Reform. Stamford, CT: Cengage Learning.
Dae, K .Y. & Tae-gyu, Y. (1990). Law and political authority in South Korea: Issue 2 of IFES Korean studies series. Colorado, CO: Westview Press. Read More
Share:
Tags
Cite this document
(“South Koreas Constitutional Court Essay Example | Topics and Well Written Essays - 500 words”, n.d.)
South Koreas Constitutional Court Essay Example | Topics and Well Written Essays - 500 words. Retrieved from https://studentshare.org/miscellaneous/1596587-south-koreas-constitutional-court

...?Constitutional Answer to Question British parliament has a bicameral nature and it constitute of both House of Commons and House of Lords.The House of lords is in the verge of reformation and the right enjoyed by the hereditary peers to contribute vote in the House of Lords will be ended soon. It can be regarded as the primary action taken to reform the house and it can bring a democratic order to the house. According to the new act of reform the appointing of life peers to the house is restricted .The reform has the objective of opposing the majority winning nature of political parties in the house of lords. The argument currently focus on changing the appointment criteria, composition and functioning...
5 Pages(1250 words)Term Paper

...and patriotic. There is an infringement of constitutional privileges of Lisa thus she stands a chance of getting legal remedy from courts. The court is one organ that must ensure the constitution is adhered to and respected by all. To extent, NRP events do not warranty constitutional uproar. This is because according to the NPR spokeswoman Anna Christopher; Simeone actions were against NPR's morals code. The code provides that "NPR journalists may not partake in marches and rallies" concerning issues NPR covers. The code notes that some requirements may not concern to outside providers. It uses an outworker who principally contributes arts reporting as...
3 Pages(750 words)Term Paper

...1999). Understanding Korea Countries that present with high context cultures include Korea, wherein individuals connote extensive networks among groups, peers and family members (Cook 2002). Studies concerning intercultural communication indicated that mostly Eastern countries, particularly Asian cultures, pose heavy direction in accordance with high-context data, an example would be the languages used in Asian countries that profuse subtlety (Kramsch 2001). Apart from the language, another notable factor is the non-verbal communication prevalent among Asian cultures that are deemed indirect as opposed to those in Western cultures. Another factor that contributes to the high context nature of...
5 Pages(1250 words)Assignment

...a declaration that the laid down laws were invalid7.The full court considered their claims that the laid down laws, which prohibited public speaking and denied people the freedom of public and political communication, were invalid. Some parts of the impugned laws were declared to have exceeded the by-law and made the powers deliberated on the council by the local government act. The full court therefore released an appeal from the decision of the district court. The full court held that they invaded constitutional freedom of communication on political and government matters and that the laws were therefore invalid. The Attorney-General for...
5 Pages(1250 words)Essay

...but not a mere political behaviour (Bagdanor, 2008:46). This is one reason why the constitution of the Great Britain should not be codified. Another problem is that if the constitution of the Great Britain is codified then there will be potential conflicts between the constitutional principles. Reasons for such conflicts are that these principles are commonly general in nature so conflict will be obvious when they occur, for example, the doctrine of the rule of the rule of law. AV Dicey stated that: No man is punishable or can be lawfully made to suffer in body or goods except for a distinct breach of the law established in the ordinary manner before the ordinary courts...
9 Pages(2250 words)Essay

The Roots of Koreas Deep Division

...and provided an incubator for rival factions to flourish and energize. After Japan was defeated and Korea liberated in 1945, Soviet-American agreements exploited the divisions that had sprung up during the previous decades. Fueled by old resentments, nationalistic movements, and cold war politics, the Soviet-American actions drove a wedge between North and South Korea, precipitated the Korean War, and erected a lasting wall dividing a country that 50 years earlier had been united. The seeds of division began to be sowed with the arrival of Japanese influence in the Korean peninsula. The 1876 treaty of Ganghwa between Japan and Korea was negotiated to open up trade...
8 Pages(2000 words)Essay

...that the media has created in the sense Tony Blair himself can decide to go into war without anyone else's support is unreasonable. He must still discuss the matter with advisors, and also cabinet can still overrule the prime minister, for example Margaret Thatcher, who was removed as party leader. For all of the above to be true there must be some sort of constitution in the UK, although it is not codified the government must still operate under a framework, and does have restraints for example quangos such as WDA on certain issues, however due to the fact the government sets up these quangos usually have the same opinions as the party in power. The courts however do have a greater influence over the...
4 Pages(1000 words)Essay

...The Real World of Constitutional Rights and the Legal System The concept of rights in America is often misunderstood, as is the concept of what are referred to as “Constitutional Rights.” Since it is widely recognized that the Supreme Court is arguably the “supreme power” in the US, we check to see what they think about the concept of rights: As in our intercourse with our fellow men, certain principles of morality are assumed to exist without which society would be impossible, so certain inherent rights lie at the foundation of all action and upon a recognition of them alone can free institutions be maintained. These inherent rights have never been more happily expressed than in the...
4 Pages(1000 words)Research Paper

...Constitutional Convention By the fall of 1786, reality downed upon the Americans that the Articles of Confederation, the underpinning document for the new-fangled United States approved in 1777, had to be significantly customized. The Articles denied the Congress any authority to control domestic affairs, no clout to control commerce, and no authority to tax. Lacking coercive authority, Congress entirely depended upon monetary hand-outs from the states, which at that time refused the Congress requests to be financed (McClellan 1-2). Congress at this time was totally bogged down by the bankruptcy it was steeped in, and could not afford to compensate the military for their services in the Revolutionary warfare, or settle...
2 Pages(500 words)Essay
sponsored ads
Save Your Time for More Important Things
Let us write or edit the essay on your topic "South Koreas Constitutional Court" with a personal 20% discount.
GRAB THE BEST PAPER

Let us find you another Essay on topic South Koreas Constitutional Court for FREE!