Comments (0)
Add to wishlistDelete from wishlist
Cite this document
Summary
In the article ‘A Modest Proposal’, Jonathon Swift makes use of ethos, pathos and logos in order to convince his audience of his argument, though it is not successful purely due to the extremity of the subject matter. By appealing to the emotionality and sentiments of the…
Download full paperFile format: .doc, available for editing
HIDE THIS PAPERGRAB THE BEST PAPER97.9% of users find it useful 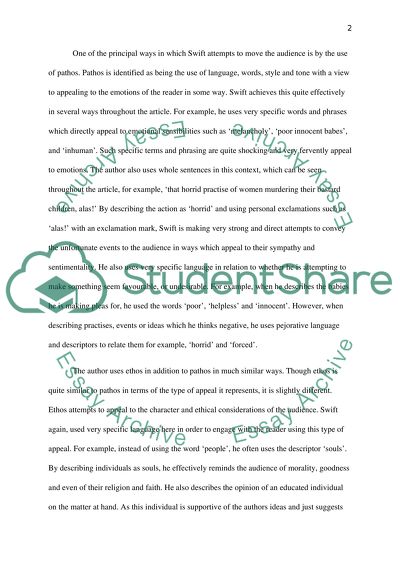 Download file to see previous pages Firstly, the exigence, or problem presented is the issue of an abundance of poor children of beggar women present on the streets of Ireland, and the burdens that these children bear upon the countries economy and poverty stricken parents. This is an exigence, as such a problem can certainly be modified or improved via human interference. Swift uses persuasive language to describe this problem in a way which exemplifies and presents it in a very particular light which suits his argument. The second part of the rhetorical situation here, is the audience, being those citizens of Ireland which are capable of contributing and making a difference to the problem as Swift suggests. Lastly, the constraints of the situation are presented as being related to time and money. However, the author conveys them as being possible to overcome by explaining specific ways in which the constraints and problem can be solved and/or improved.
One of the principal ways in which Swift attempts to move the audience is by the use of pathos. Pathos is identified as being the use of language, words, style and tone with a view to appealing to the emotions of the reader in some way. Swift achieves this quite effectively in several ways throughout the article. For example, he uses very specific words and phrases which directly appeal to emotional sensibilities such as ‘melancholy’, ‘poor innocent babes’, and ‘inhuman’. Such specific terms and phrasing are quite shocking and very fervently appeal to emotions. The author also uses whole sentences in this context, which can be seen throughout the article, for example, ‘that horrid practise of women murdering their bastard children, alas!’ By describing the action as ‘horrid’ and using personal exclamations such as ‘alas!’ with an exclamation mark, Swift is making very strong and direct attempts to convey the unfortunate events to the audience in ways which appeal to their ...Download file to see next pagesRead More
Share:
Tags
Cite this document
(“Rhetorical Analysis Essay Example | Topics and Well Written Essays - 1000 words - 13”, n.d.)
Rhetorical Analysis Essay Example | Topics and Well Written Essays - 1000 words - 13. Retrieved from https://studentshare.org/miscellaneous/1595284-rhetorical-analysis

CHECK THESE SAMPLES OF Rhetorical Analysis

The article correctly states that the strengths include all resources and capabilities needed for achieving and maintaining a competitive advantage over its competitors. The MAS Company is the producer of women’s wear for big brand names that included Victoria’s Secret and GAP. The company is one of Sri Lanka’s largest manufacturers of apparel. It hires more than 33,000 people to work in more than 20 factories in ten countries. The company’s average output exceeds 43 million bras in one year. The company has grown in terms of reputation among its clients from around the world. The popularity of the big name brands is grounded on the exquisite craftsmanship of the MARS Company’s line and staff employee...
9 Pages(2250 words)Case Study

The company is leading because of its best team of employees who are not only trained but are energetic to accept the challenges related to the market and move on, taking even the most difficult of challenges into account, and not being driven away by them. The Company is doing its part by p...
8 Pages(2000 words)Case Study
sponsored ads
Save Your Time for More Important Things
Let us write or edit the essay on your topic "Rhetorical Analysis" with a personal 20% discount.
GRAB THE BEST PAPER

Let us find you another Essay on topic Rhetorical Analysis for FREE!