The effect of stress on personnel and organization behaviour - Essay Example 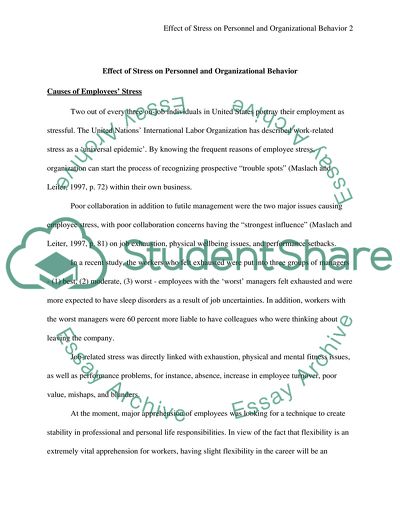 Download file to see previous pages 81) on job exhaustion, physical wellbeing issues, and performance setbacks.
In a recent study, the workers who felt exhausted were put into three groups of managers - (1) best, (2) moderate, (3) worst - employees with the ‘worst’ managers felt exhausted and were more expected to have sleep disorders as a result of job uncertainties. In addition, workers with the worst managers were 60 percent more liable to have colleagues who were thinking about leaving the company.
Job-related stress was directly linked with exhaustion, physical and mental fitness issues, as well as performance problems, for instance, absence, increase in employee turnover, poor value, mishaps, and blunders.
At the moment, major apprehension of employees was looking for a technique to create stability in professional and personal life responsibilities. In view of the fact that flexibility is an extremely vital apprehension for workers, having slight flexibility in the career will be an important basis of stress. “The additionally practical as well as unyielding a business is regarding taking time off, finding out professional agendas, and so forth, the higher the stress level of its workforce” (Maslach and Leiter, 1997, p. 87).
When employees are stressed as a result of work surplus or time constraints, they are more liable to disregard security practices or overlook the utilization of appropriate security mechanism, considering “they do not have time for either” (Gee and Gee, 2011, p. 99). Since stress neglects an individual’s capability to think, without a doubt, the worried workers are more expected to operate without paying attention to the possible outcomes of hazardous practices.
A worker, who is tensed due to excess of work, is likely to rush and attempt to go as rapidly as feasible with a task. This raises the possibilities of blunders, mishandling objects, and taking no notice of safety warnings that could avoid ...Download file to see next pagesRead More
Share:
Tags
Cite this document
(“The effect of stress on personnel and organization behaviour Essay”, n.d.)
The effect of stress on personnel and organization behaviour Essay. Retrieved from https://studentshare.org/miscellaneous/1593222-the-effect-of-stress-on-personnel-and-organization-behaviour

“The Effect of Stress on Personnel and Organization Behaviour Essay”, n.d. https://studentshare.org/miscellaneous/1593222-the-effect-of-stress-on-personnel-and-organization-behaviour.
Comments (0)
Click to create a comment or rate a document

The Effect of Truth on the Protagonist Survival

Solzhenitsyn, a Nobel Prize winner, had been a rather obscure and unpublished 43-year-old teacher in a high school, situated in a Russian town, Ryazan, but suddenly in 1962, burst into the literary scene with his groundbreaking novel “One Day in the Life of Ivan Denisovich” which made him an overnight literary sensation. Besides being both compelling as well as authoritative, the truth of Stalin’s barbaric camps forms the mainstay of this novel. Solzhenitsyn’s simple but yet blatantly truthful messages about the prevalent Russian politics are elegantly woven into the story that erupted a plethora of protest from all quarters of society. Many of Solzhenitsyn stories were written in the labor and prison...
7 Pages(1750 words)Case Study

9 Pages(2250 words)Assignment
sponsored ads
Save Your Time for More Important Things
Let us write or edit the essay on your topic "The effect of stress on personnel and organization behaviour" with a personal 20% discount.
GRAB THE BEST PAPER

Let us find you another Essay on topic The effect of stress on personnel and organization behaviour for FREE!