Comments (0)
Add to wishlistDelete from wishlist
Cite this document
Summary
One of the effects of conflict is that it damages the morale of the employees. A lower morale occurs because conflict raises work tensions and disrupts the cooperation among the team members…
Download full paperFile format: .doc, available for editing
HIDE THIS PAPERGRAB THE BEST PAPER93.8% of users find it useful 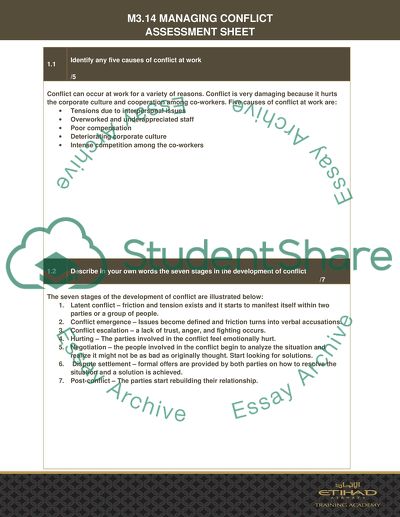 Conflict can occur at work for a variety of reasons. Conflict is very damaging because it hurts the corporate culture and cooperation among co-workers. Five causes of conflict at work are:
Tensions due to interpersonal issues
Overworked and underappreciated staff
Poor compensation
Deteriorating corporate culture
Intense competition among the co-workers
1.2
Describe in your own words the seven stages in the development of conflict
/7
The seven stages of the development of conflict are illustrated below:
1. Latent conflict – friction and tension exists and it starts to manifest itself within two parties or a group of people.
2. Conflict emergence – Issues become defined and friction turns into verbal accusations.
3. Conflict escalation – a lack of trust, anger, and fighting occurs.
4. Hurting – The parties involved in the conflict feel emotionally hurt.
5. Negotiation – the people involved in the conflict begin to analyze the situation and realize it might not be as bad as originally thought. Start looking for solutions.
6. Dispute settlement – formal offers are provided by both parties on how to resolve the situation and a solution is achieved.
7. Post-conflict – The parties start rebuilding their relationship.

1.3
As a potential line manager explain the effects of conflict on individual or
your teams performance at work. Include a minimum of two effects.
/2
Conflict can be very damaging to an organization or to the performance of a work team. One of the effects of conflict is that it damages the morale of the employees. A lower morale occurs because conflict raises work tensions and disrupts the cooperation among the team members. Another detrimental effect conflict has on a team is that it lowers the productivity and performance of a team. Conflict causes inefficiencies and as a consequence the team leader has to dedicate time to resolve the conflict. Time is wasted due to the emergence of conflict. Companies have to dedicate resources such as the intervention of the human resource department or hiring a mediator in order to resolve conflicts.
1.4
Explain any recognised techniques you would use as a manager to minimise and resolve conflict in the workplace
/6
When conflict occurs finding a resolution is imperative because conflict can disrupt the work environment of an organization. Five recognized techniques that line managers can utilize to resolve conflict are accommodation, collaboration, compromise, avoidance, and authoritative command. Accommodation involves playing down the differences and finding areas of agreement among the parties. Collaboration allows the parties to recognize that something is wrong and the problem needs immediate attention. The underlying problem is the root of the conflict. A compromise is a good method to find a resolution because each party gives up something of value to the other in order to end the conflict. Avoidance pretends that the problem does not exist. The assumption is that the problem will play itself down through time. Authoritative command uses formal authority to end the conflict.
1.5
Describe how you could create harmony at work and engender a positive atmosphere in order to minimise the adverse effects of conflict.
/5
As a manager I would create harmony at work and engender a positive atmosphere by focusing on building a strong corporate culture. The corporate culture of the company should bring the employees closer to each other. A second technique that I would use to build a better workplace is by empowering my employees. Employees that feel they are valued by their supervisors are more likely to achieve job satisfaction. A third technique I would use to create harmony is teamwork. Read More
Share:
Tags
Cite this document
(“Managing conflicts assessment Essay Example | Topics and Well Written Essays - 500 words”, n.d.)
Retrieved from https://studentshare.org/miscellaneous/1592303-managing-conflicts-assessment

...? Race, Gender, Clash of Civilizations, and Identity Conflicts and number 11 September Race, Gender, Clash of Civilizations, and Identity Conflicts In the film “Pleasantville” (1998) by Garry Ross, David and Jennifer, two teenagers who are also siblings, are transported into a town called Pleasantville. It is a black-and-white suburban community that celebrates traditional values and practices. For this film, Ross uses black-and-white color and mixed it with increasingly vibrant colors to reinforce the development of the plot. On the one hand, as a perfect world, the world is captured in black and white and framing focused on orderliness and peace. On the other hand, the film shows the underlying...
9 Pages(2250 words)Research Paper

...? Managing conflict Thesis Management of conflicts, power, and politics focuses majorly on the interpersonal processes the affect the decision-making by the managers. It may also entail the organizational way of change and adaptation of their immediate environment. It includes the capacity to influence the behavior of others in a relationship involving two parties like groups, organization, or even countries. Organizational politics is the process of one person exerting more influence over another in the relationship acted on daily forum of an organization. Conflict management is a common phenomenon in organizations...
10 Pages(2500 words)Essay

...? Managing Conflicts in Organizations Executive Summary: Conflicts are inevitable in everyday life and in organizations. The challenge for organizations today is not to avoid conflicts but to manage them in such a way that they work to the benefit of the organization. Some of the most common techniques for achieving this are stimulating functional conflict, dealing with dysfunctional conflict by means of integrating, obliging, dominating, avoiding, and compromising, third party interventions and negotiations. Conflict Management Human beings as individuals and as groups such as...
5 Pages(1250 words)Term Paper

...?Managing conflicts on colleges Affiliation: Introduction In many cases involving a collection of people, there are difficulties in bringing together their ideas in order to make a concrete conclusion. These difficulties arise because of the different opinions and view each individual have on a particular case. Since everyone wants, his/her opinion to be the one adopted and followed. These misunderstandings are the ones referred to as the conflicts. This little misunderstanding arises to bigger cases where people may insult one another based on their standings, in return, the insulted takes revenge upon the culprit. The more continued cases of these leads to mass destructions and even...
7 Pages(1750 words)Research Paper

...toward Israel is the outburst in 1987 of the first intifada, which refers to the aggressive Palestinian resistance effort in the territories that the Jewish state held. During this time, Arafat was in Tunisia, where he was exiled after his ousting from Lebanon in 1982. With the uprising spreading, Arafat gave orders to the Palestinians loyalists in the territories to control other groups, including the Unified National Leadership of the Uprising (Schanzer 2009: 30). Arafat had problems managing the conflict from Tunisia, however, which made it easy for members of the Palestinian Muslim Brotherhood to establish a breakaway organization called Harakat al-Muqawama al-Islamiyya (Islamic Resistance Movement),...
9 Pages(2250 words)Essay

...?Full Managing Conflicts through Communication Conflicts are parts of daily life. They may be unwanted but they are inevitable for human beings because they are social beings. People come in contact with other people everyday regardless of age, gender, economic status, education, religion or race so that having conflict with others is really inescapable. It is known that there are no two people are alike in every aspect of their being therefore, even twin siblings do not always agree with each other. Individuals are endowed with unique perceptions, beliefs, character traits, and understanding so that even those who have been raised in the same family and who have been...
3 Pages(750 words)Essay

...Managing Organisational Change - Assessment 3 of the Subject Name of the Concerned Professor October 21, 2008 Managing Organisational Change - Assessment 3 Part I: A Diagnosis of Rondell's Strategy and Organizational Design Every thriving organisation to a great extent is akin to an organic entity that has to bear with all the life cycle phases like conception, growth and an eventual attainment of maturity and sustainability. Thus it is imperative for the organisations in the 21st century to honour and respect the need and importance of change....
15 Pages(3750 words)Essay

...production of oil in the Gulf region. Saddam Hussein was angered both by the over-extraction of oil by Kuwait on the Iraq/Kuwait border and the failure of the ruling Kuwaiti family to write off Iraqi debts.10 More advanced understanding of interstate ethnic conflict is important for several reasons. For example, Brecher and Wilkenfeld (1997a) find that ethnic conflicts with state-to-state interactions generally are more violent and involve more coercive crisis management techniques than do their nonethnic counterparts. Interstate ethnic conflicts tend to be more protracted and therefore more difficult to resolve within a single crisis. Given the high stakes involved,...
24 Pages(6000 words)Essay

...areas are equally important. The point is to have focus as well as a refined discussion of managing performance in the context of this paper. Main Points of Discussion Due to the explanative necessities of this paper the fundamental questions will also serve as the main objectives of the paper’s discussion. Moreover main discussion segments of this paper will also be the main issues that the paper will engage and directly address. The main segments of the discussion will be: 1. The Identification and Grasp of Performance Objectives. 2. The Assessment of Performance and the extraction of feedback. 3. Grasp of Performance Support for Improvement. 4. Grasp of an Organisation’s disciplinary and grievance...
12 Pages(3000 words)Essay

...﻿Resolving Conflicts Teams and groups are inherent parts of the organization, where they exist naturally. Even the formation of groups within organization occurs as part of an instinctive process that involves forming, storming, norming, performing, and adjourning (Robbins and Judge, 2013). According to social identity theory, people tend to identify themselves with a particular group, reacting in certain ways about the success or failure of that particular group (Robbins and Judge, 2013). A great variety of projects are completed in groups where each individual member contributes with his or her share of knowledge and skills. Thus, groups exist as central players in the workplace. Groups contribute immensely to the...
1 Pages(250 words)Essay
sponsored ads
Save Your Time for More Important Things
Let us write or edit the essay on your topic "Managing conflicts assessment" with a personal 20% discount.
GRAB THE BEST PAPER

Let us find you another Essay on topic Managing conflicts assessment for FREE!