Comments (0)
Add to wishlistDelete from wishlist
Cite this document
Summary
He is deemed to manifest a transformational leadership style that enabled him to advocate non-violence to adhere to equality in civil…
Download full paperFile format: .doc, available for editing
HIDE THIS PAPERGRAB THE BEST PAPER96.9% of users find it useful 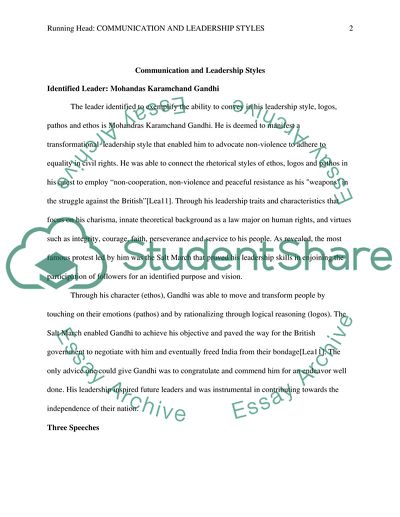 Communication and Leadership Styles Communication and Leadership Styles Identified Leader: Mohandas Karamchand Gandhi
The leader identified to exemplify the ability to convey in his leadership style, logos, pathos and ethos is Mohandras Karamchand Gandhi. He is deemed to manifest a transformational leadership style that enabled him to advocate non-violence to adhere to equality in civil rights. He was able to connect the rhetorical styles of ethos, logos and pathos in his quest to employ “non-cooperation, non-violence and peaceful resistance as his "weapons" in the struggle against the British” (Leadership With You, 2011). Through his leadership traits and characteristics that focus on his charisma, innate theoretical background as a law major on human rights, and virtues such as integrity, courage, faith, perseverance and service to his people. As revealed, the most famous protest led by him was the Salt March that proved his leadership skills in enjoining the participation of followers for an identified purpose and vision.
Through his character (ethos), Gandhi was able to move and transform people by touching on their emotions (pathos) and by rationalizing through logical reasoning (logos). The Salt March enabled Gandhi to achieve his objective and paved the way for the British government to negotiate with him and eventually freed India from their bondage (Leadership With You, 2011). The only advice one could give Gandhi was to congratulate and commend him for an endeavor well done. His leadership inspired future leaders and was instrumental in contributing towards the independence of their nation.
Three Speeches
After listening to the speech of Steve Jobs at Stanford University (Jobs, 2005), his lessons included connecting the dots (or seeing meaning in failures and trials); loving and losing; embracing death as a transition in life and staying hungry and foolish. As to Dalton Sherman’s keynote speech at Dallas Independent School District (YouTube, 2008), his message focused on believing in oneself and in colleagues as enhancing one’s ability to succeed. There is another speech made by J.K. Rowling at the 2008 Harvard Commencement event that focused on The Fringe Benefits of Failure, and The Importance of Imagination” (Rowling, 2008). She provided a relevant lesson that “Life is difficult, and complicated, and beyond anyone’s total control, and the humility to know that will enable you to survive its vicissitudes” (Rowling, 2008, p. 1).
The three speeches were effective in eliciting emotional appeal on the audience using rhetorical elements of ethos, pathos and logos; as well as provoking encouragement to go beyond failure and challenges in life. The ten year old boy has the least appeal in terms of character since he was not a famous celebrity; but his ability to communicate a message effectively covered for the ineptness. Further, since he was only 10 years old, he still lacked the experience to give wider advice to the audience and therefore, limited his speech on highlighting the need to believe in oneself and the importance of support systems (other people believing in the capabilities of children). It was actually appropriate for the back to school occasion. Both Steve Jobs and J.K. Rowling were known personalities who have succeeded in their respective fields of endeavor. Their presence alone and their achievements provided inspirations and appeal to the audience.
Learning from Class
One realized the crucial role of both communication and leadership skills in one’s quest to achieve. Through the course module, the writing exercises and lessons that focus on honing communication skills and leadership styles were instrumental in recognizing one’s strengths in these areas and those weaknesses that need to be improved. Also, through this particular activity, one learned the value of not being afraid of failure - as advised, experienced, and embodied in the lives of famous personalities such as Steve Jobs and J.K. Rowling – who were not afraid to have failed and yet; became the impetus for their phenomenal success.
References
Jobs, S. (2005). Steve Jobs 2005 Stanford Commencement Address . Retrieved December 12, 2011, from Stanford University: http://www.youtube.com/watch?v=UF8uR6Z6KLc
Leadership With You. (2011). Mohandas Gandhi. Retrieved December 12, 2011, from http://www.leadership-with-you.com/gandhi-leadership.html
Rowling, J. (2008). The Finge Benefit of Failure, and The Importance of Imagination. Retrieved December 12, 2011, from Harvard Magazine: http://harvardmagazine.com/2008/06/the-fringe-benefits-failure-the-importance-imagination
YouTube. (2008, September 19). 10 year old intellect, Dalton Shermans keynote speech . Retrieved December 12, 2011, from http://www.youtube.com/watch?v=yZm0BfXYvFg Read More
Share:
Tags
Cite this document
(“Communication and leadership styles Essay Example | Topics and Well Written Essays - 500 words”, n.d.)
Communication and leadership styles Essay Example | Topics and Well Written Essays - 500 words. Retrieved from https://studentshare.org/miscellaneous/1586513-communication-and-leadership-styles

CHECK THESE SAMPLES OF Communication and leadership styles

...?Leadership Styles Introduction A key element in the success or failure of an organization is its leadership. Leadership is a crucial in organizational behavior because it has dynamic effects on the individual and organizational interaction (Obiwuru, Okwu, Akpa, and Nwankwere, 2011). The success or failure of these organizations is dependent on the leadership style adopted by all the stakeholders in the company or organization, particularly the top management. This is because the manager is supposed to be aware of the individual and group behavior as well as have the capability to communicate and motivate the employees....
7 Pages(1750 words)Research Paper

...?Communication Aspects, Personality and Leadership Styles used in Management The success of every organization depends on the effectiveness of its management. In order to deliver quality management, it is important that managers apply the correct management style and use the most appropriate communication styles. They should also have an insight of the personalities of every employee. This information is very essential in conducting employee placements into various work positions. There is need to help individuals in management positions improve their level of effectiveness and guide those who are beginning their leadership roles. The aim of this paper is to explain the main management and leadership styles that can be utilized... in by...
6 Pages(1500 words)Research Paper

...? Leadership Styles Leadership Styles Introduction Healthcare organization is one of the growing sectors globally including the United States of America. These organizations serve as one prime source of income for the country, and thus many of them have transformed into giant bodies focusing on profit making more than public health and welfare (Zoubul, 2005). Incident Highlighting Leadership Attention A recent event in our organization that has highlighted a practice that needs to be corrected is of misleading the patient for the sake of profits. A patient was admitted in the hospital, being diagnosed with the symptoms of cancer, was asked to do blood,...
3 Pages(750 words)Term Paper

...?Introduction There is a huge body of literature and research that has analyzed and explained gender differences between men and women especially at the workplace and in business settings in terms of communication and leadership styles. A review of the literature shows that indeed the way in which men regard interaction in business communication differs from how their female counterparts would do the same, thereby creating a disparity in their leadership and communication styles. In as much as these differences impact the ways in which they communicate, interact or engage in leadership...
8 Pages(2000 words)Essay

...College Leadership Styles Leadership may take different forms depending on the personality and strategies used by managers. However, the result and their effectiveness depends more on the approaches used in managing an organization or a team for that matter. Though there are different styles of leadership in organizations, some leaders may use a hybrid approach by integrating two or three leadership approaches while others choose to use the extremes in applying a single management method only. To illustrate the effects of different leadership approaches as used and its success and effectiveness, this report compares...
3 Pages(750 words)Case Study

...Running Head: Communication Styles Communication Styles Cohort number Submitted Introduction Communication can be roughly defined as the transfer of meaning from one individual to another. The tricky part about this is that the ideas held in one person’s brain and made clear through their actions and speech are not necessarily that the other person receives as a result of these same actions and speech. This general definition also illustrates that the idea of communication is not limited to the words and sounds that humans have developed as a means of expressing their ideas but can also extend to gestures and behaviors. Persons of any...
10 Pages(2500 words)Essay

...Running Head: MALE FEMALE COMMUNICATION STYLES and Section # of Introduction Effective communication is the basis of every successful business deal, every successful product. In the highly competitive business world, communication has the highest relevance; it can make or break an organization. In a multicultural environment that fosters diversity and encourages multidisciplinary interaction, communication pays a key role. Thus it becomes very important that the effective exchange of ideas and knowledge is ensured so that the business processes becomes effective in relation with its corresponding objectives. The scenario becomes additionally complex as...
4 Pages(1000 words)Essay

...., 2008). Autocratic leadership style is usually carried by leaders who make all the decisions in the organization alone (Amos et al, 2008). These leaders use authoritarian rule and they do not bother consult other members of the team when they are making decisions in the organization. The leader who uses this style has the final authority to make any decision in the organization and it can also be noted that the communication channel used is top to bottom where the subordinates are mere takers of instructions from the top. In other words, they just respond to what has been said from the top without any contribution. The subordinates can hardly interact with their leaders. This leadership style is oriented towards goal attainment... the...
6 Pages(1500 words)Essay
sponsored ads
Save Your Time for More Important Things
Let us write or edit the essay on your topic "Communication and leadership styles" with a personal 20% discount.
GRAB THE BEST PAPER

Let us find you another Essay on topic Communication and leadership styles for FREE!